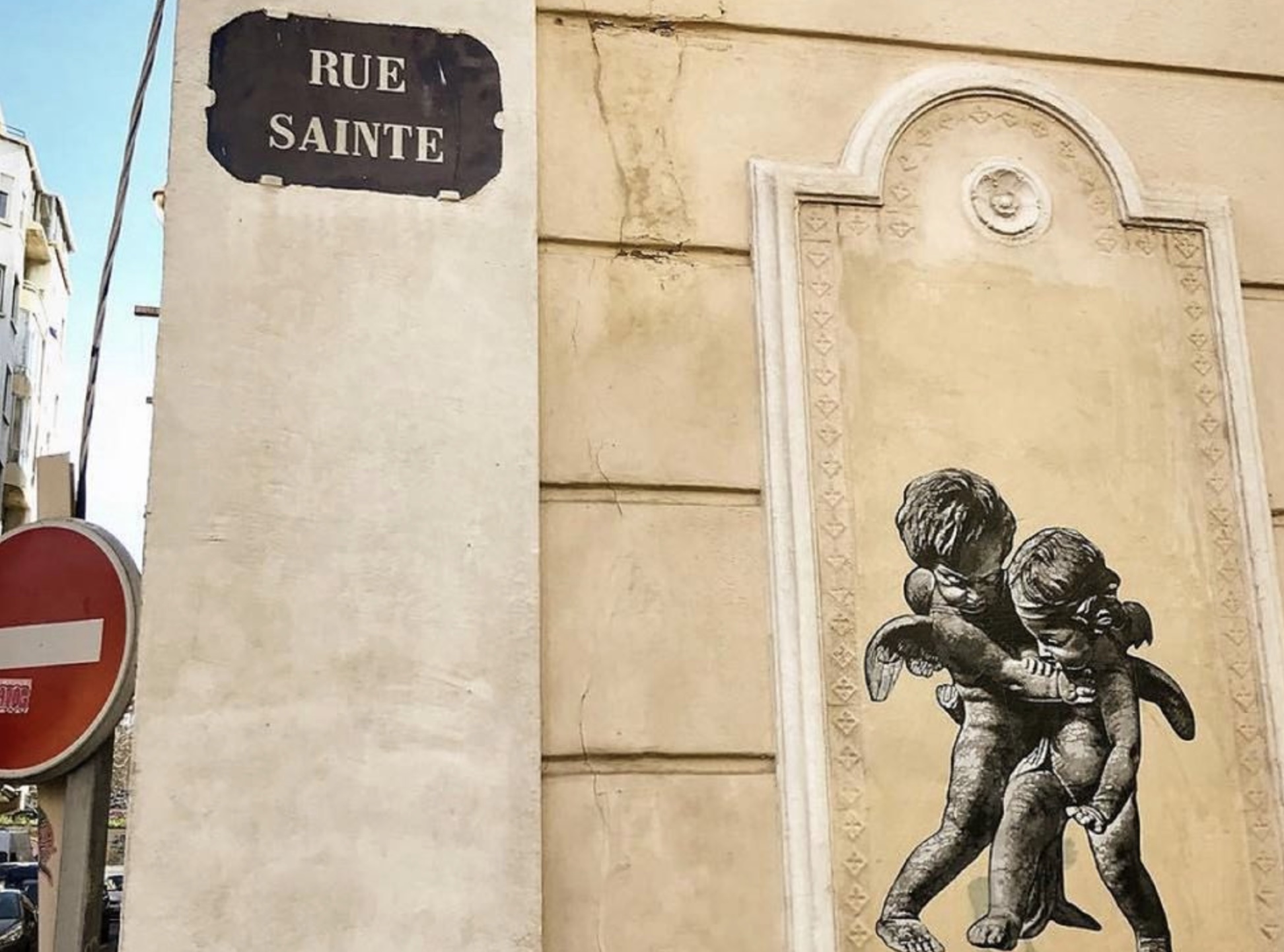 Jef Aerosol is a pseudonym used by Jean-Francois Perroy, a French stencil graffiti artist. He made his first graffiti in 1982, and since then, he has painted all over the world. He was born in Nantes in 1957.

An early pioneer of street art, Jef began his career in Tours, France. His street art and gallery paintings are exhibited all over the world. He is not only a stencil master, but also a master of the art of portraiture.

You can say he is a photographer who exhibits his photos on walls all over the world. His iconic portraits include both famous people and ordinary people. No matter if it is a famous people or an ordinary person, both are created to show the truth.

He was vastly influenced by the 1960s, when the British invasion in music took over the world. One thing that stands out in his work is the red arrow. You can find it in all of his drawings. There is no precise explanation for the arrow.

His most famous work is the sitting kid.

We start off with Jef’s most famous work, which is the sitting kid. This stencil depicts a young child who is alone and withdrawn. The work became so famous around the world, it is also part of the Wall of China.

As we mentioned before, many of his stencils are designed to show the truth and serve as a type of message to the world. And open your eyes is definitely one message that we all have to hear. We need to start using our senses and see the world as it is.

Twiggy is one of the characters that greatly influenced Jef’s work. She was the first supermodel, and was successful during the 1960s and 1970s. That was the time Jef was growing up, and once he got older, he wanted to pay a tribute to the famous model.

All of his pieces are flooded with emotions. Jef loves showing the emotional side of things. And you won’t have find a more emotional dance than tango.

Jef lived in Europe, but Springsteen managed to make a name in the whole world. He is one of the most recognizable American singers. And he made his name in the 1970s, one of the early decades of Jef’s life. We said the 1960s and 1970s played a huge influence on him.

6. Kids Embracing And Kid On Swing

This is a bit of a twist on his most famous work, the Sitting Kid. You have two completely different concepts in the same stencil art. One is the two kids embracing each other and hugging, and then a child that is completely alone on a swing.

Kids are a huge concept in his art. His Sitting Kid is his most famous work. And he also loves putting kids in a different role or setup. Like little angels, for example.

Music is one of the biggest influences on Jef’s career. It is only logical that he puts some of the most notable music stars in one piece of art. And what better place than in front of a music shop?

While Jef was influenced by the 1960s and 1970s, he is also a modern artist. And nowadays, cats are more famous and popular than ever. Just look at the face of the cat. What is she thinking? That is the genius of Jef Aerosol.

Western movies were quite popular when Jef was growing up. But guns should not shot bullets and kill people. You can say this is Jef’s take on “make love not war”.

Etaples-sur-Mer is a commune in the Pas-de-Calais department in northern France. It is a fishing and leisure port. And apparently, it holds value for Jef Aerosol, since he wanted to give a stencil piece to the commune.

Seeing kids smile and enjoy life. That is the dream we have, to build a better world for the next generation. Jef shows that dream in a stencil art like nobody else.

We are all sometimes amazed and surprised by the way kids are acting. Kids showing the finger in public is definitely not something we want to see. But when you present the reality as the truth, you can do something to change it.

14. You have to give people something to dream on – Jimi Hendrix

Jef does a great job with one of Hendrix’s most famous motivational quotes. In the same quote, Jimi says “Let me live life my own way”. Wise words from one of the biggest artists in America.

Stanislas was the first king of Poland. His statue in the French city of Nancy is the inspiration for this stencil.

16. With Time and Sitting Kid

We talked previously about the sitting kid, the most famous work by Jef. Now, we see the kid in a different setting. How much time he has left? And what will happen when there is no more time left?

Salut is the traditional greeting in French. And mademoiselles, or mistresses are quite popular in French culture and history. But they are not always what the public thinks of them.

We said before that music is one of the biggest inspirations for Jef’s work. He thinks that music is what makes the world a better place, helps us get through tough times, and inspire us to be better people. Music is so strong and powerful, it can literally soften walls.

As you go through Jef’s work, you will find out that loneliness is a common concept. Truth be told, we live in a world where many people are lonely. Even those with lots of friends. Depression and anxiety are taking over, and we have to try and change that.

Music helps us share the love we have. And it is through music that we connect with people from different race, nationality, and sex. Music can really bring the world together.

Gandhi is one of the most famous pacifists. A true fighter for better world, peace, and equality between people. He spent years in prison for what he believed in. And he spoke loudly about what violence can do to this world.

23. Music Before Anything Else

You probably recognized the two people on the graffiti. The same two children can be seen in a number of graffiti by Jef Aerosol. What is different is the message above their heads.

This is probably one of the best pictures you will see today. Kids posing in front of Jef’s stencil art about children and hope.

Andy Warhol and Basquiat were close friends. The weird friendship might sound and look strange to others, but these two were very close. They redefined art in their own way, Warhol with his pop art, and Basquiat with his graffiti. Keith Haring is another graffiti artist, who made his name during the 1980s in America.

It is only logical to see David Bowie on a Jef Aerosol graffiti poster. He was one of the most famous music stars, and fought for the same principls Jef stands for.

Sometimes, the raw emotion in a simple picture is overwhelming. Everyday life produces so many emotions that we ignore and fail to see. Just look at how much joy eating brings to this kid.

Music and dance go hand in hand. They go together, and joy they bring to the people is infectious.

A blues singer and a dark and melancholic poet. Now that might sound like a strange combination, but in reality, these two had much in common. For starters, they managed to find emotion in the strangest place.

Favela is a unique, low and middle income, and most importantly, unregulated neighborhood in Brazil. The very first Favela was built in the center of Rio de Janeiro in the 19th century by soldiers who had nowhere to live. And while that sounds sad, in this graffiti, Jef shows that even in the darkest times, you can find a reason to smile.

The symbolism in this graffiti is just amazing. Kids are the future of the world we live in. But they will continue to live here. The question is, what we are leaving for them?

Jef Aerosol often tries to send a message of equality through his work. And in this graffiti, he tries to say that we are all equal, black and white.

This gigantic stencil covers the gable wall of a building overlooking Place Igor Stravinsky. It is his biggest work, measuring at 350m2. The monumental sencil auto-portrait is looking at us, with eyes that clearly hint that it is time to be quiet.

This is not a graffiti, but a picture showing the artist with his signature red arrow.