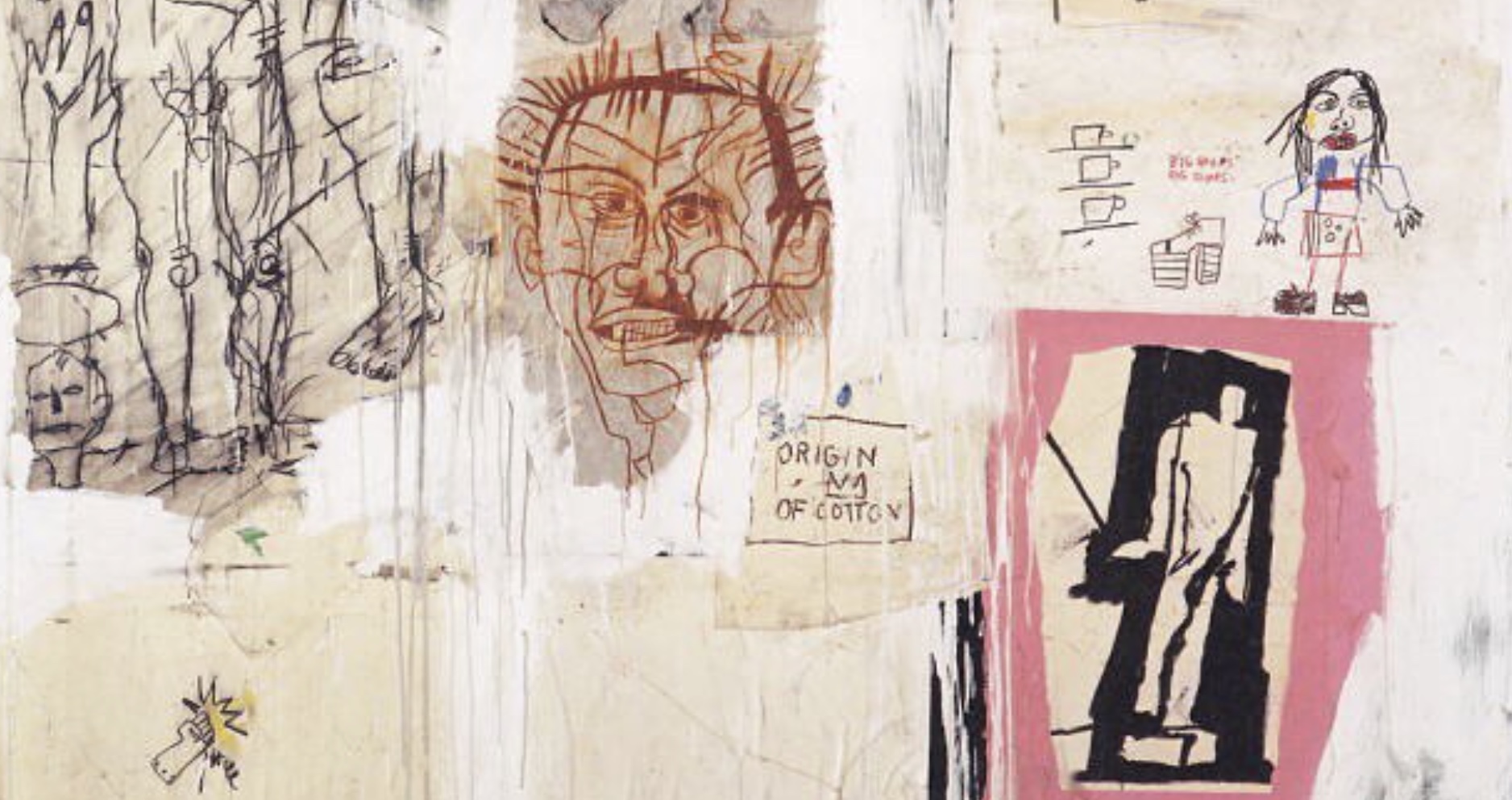 Jean-Michel Basquiat was an American artist of Haitian and Puerto Rican descent. He first achieved fame as part of SAMO, an informal graffiti duo that wrote enigmatic epigrams in Manhattan during the 1970s.

In the beginning, his graffiti art was influenced by rap, punk, and hip-hop music. By the 1980s, he developed his neo-expressionist style, and his paintings were exhibited in galleries and museums across the world.

In the 1980s, he became a close friend with Andy Warhol. While it was an unlikely pairing, it won the hearts of art lovers around the world. Many experts suggest that Basquiat couldn’t cope well with the death of his close friend Warhol in 1987.

In 1988, Jean-Michel died of heroin overdose. His art is recognizable for the crowns he uses. He puts the crowns as a symbolic stand-in for himself or other people he admired. After his death, Keith Haring paid a tribute to his friend with the “Pile of Crowns” painting.

This painting is from his early days, when he used colored crayons for drawing on paper. It is also the time when his paintings were less complex and with less objects on them.

When Jean-Michel died, he was worth close to $10 million, even taking inflation into account. This painting is one of his most successful. It sold for $37 million at an auction in 2015.

Depicting a boxer standing in the ring with his fists raised and clutching a spear, this painting shows his transition. Moving on from crayons, Jean-Michel started using acrylics for his paintings. You can see the colors are more vivid and natural.

Speaking for his Untitled series, Jean-Michel said that they offer a window into his approach, in which he remixed references. He often liked to say that his Untitled paintings can turn museums into your classroom.

This painting is the perfect example for his raw, honest, edgy art. Basquiat loved to paint seemingly simple art, with a stunning visual impact. That is the core of his neo-expressionism and primitivism.

This painting doesn’t appear to make much sense. However, it is an important. Both figures are self-representation of the artist. However, it is the boy torment and struggle that is often seen in Jean-Michel’s paintings that attracts the eye.

We can easily recognize his signature painting style of obsessive scribbling in this painting. Many of the paintings are self-representations of his mood and temperament at the time.

Julius Caesar is one of the most important emperors and figures in world history. Knowing Basquiat’s obsession with crowns, it is easy to understand why he painted Caesar. After all, he was one of the first emperors to done a crown.

This painting is one of his first mature works. You can see how it is complex in the imagery, but also in painting techniques. Composed of joint wood panels covered in feathers, crayons, and his trademark acrylic, the painting helped Jean-Michel gain wide popularity.

The painting bleeds history, portraying a black skull scarred with red, pitted with angry eyes, and gnashing its teeth. The skull is also positioned against a blue graffiti wall. But was that worth the price it fetch? This is the most expensive painting ever sold by Jean-Michel, and by an American artist as well. When it was first sold in 1984, it fetched only $19,000. However, in 2019, a Japanese billionaire bought the Untitled Skull painting for $110.5 million, which is the highest price for an American artist. In a way, Basquiat topped his friend Warhol.

Basquiat is an African-American, and because of his Haitian descent, he is black. And he often manages to bring race into his paintings. Here, he makes a conscious effort to provide a sharp critique on members of his own race.

We said Jean-Michel and Andy Warhol were close friends. They also worked together. This painting is actually a self-portrait of the famous friendship.

Artists often use their medium to pay homage to friends and idols. This one is a homage to Jazz saxman Charlie Parker, who was an idol of Basquiat. Charlie was nicknamed Yardbird or Bird.

We said Baquiat was obsessed with crowns. They are a symbolic stand in for himself. Well, this is how much he loved crowns.

We saw how Jean-Michel used a dog as a self-representation in the Boy and Dog painting. Well, here, he shows only the dog, but the same torment and rage in his eyes. The painting is a perfect example of how we treat animals in our society.

This painting is quite important in the oeuvre of Jean-Michel. He created it for a show in 1982 at the Fun Factory. What is the catch? Prices were set deliberately low as a protest against the exploration of his work. The painting was sold for just $570, and he received no money from the sales.

The artist made a couple of self-portraits. One might say all of his paintings feature a self-portrait. But this one is quite special, showing the rage against society.

This painting was also sold for a huge price during the Sotheby’s auction in May 2015. The skull was sold for $110.5 million, and this one, Devil Black Head, fetched $57.3 million. Both of the paintings were put on display at the museum in Chiba, Japan.

This boxer, same as the one at the beginning, are two examples of the torment of the soul. They show the exact emotions Basquiat was going through.

We mentioned previously Jean-Michel was a huge fan of Jazz music. So, he paid another homage to it, showing a classic Jazz player on a sax.

24. Undiscovered Genius of the Mississippi Delta 1983

As the name suggests, this painting is actually an undiscovered genius. But not of the Mississippi Delta, but of Jean-Michel’s genius. At first glance, there are only random bits of symbolism. You see a crude face of cow, sketch, and some other objects. However, they are all smudged and chaotic before your eyes, and that is where the magic happens.

This painting is based on a panel painting he created in Venice, California studio in 1984. The painting portrays the griot, a storyteller, purveyor of oral history from West African culture. It is another example of how he supports his race.

This painting is another example of how he effectively introduced the unique African-American and Latino experience to the elite world of art. A museum quality painting, it looks simple and scrambled, but there is so much symbolism behind it.

Pez is the brand name of an Austrian candy, and associated with manual candy dispensers. These were quite popular in the 1980s. It was invented in Austria, and then exported worldwide. Basquiat gives it his own treatment with the crown and everything else.

We live in a world where the air is quite polluted. We are scrambling for oxygen, and all we get is CO2. Jean-Michel only wanted to show the reality we live in on a painting.

This painting is the latest shown at the Sotheby’s Contemporary Art Evening Auction. It took place on October 3, 2019.

In his devil painting, the artist refers to the evil within us all. The figure is hidden behind colors, or in this case, represented as pink, something cute and adorable. But evil is always masked by the surroundings.

Jean-Michel used self-portraits to depict certain issues in the society through painting. And you can say he was quite successful at it.

The genius of Jean-Michel was he could take a simple concept, and turn it into art. Like ISBN, the International Standard Book Number, a numeric commercial book identifier.

Painted during his last years, or in his last year to be exact. It is characteristic for that period of his work, when there is no intricate text in the painting. Only subjects. 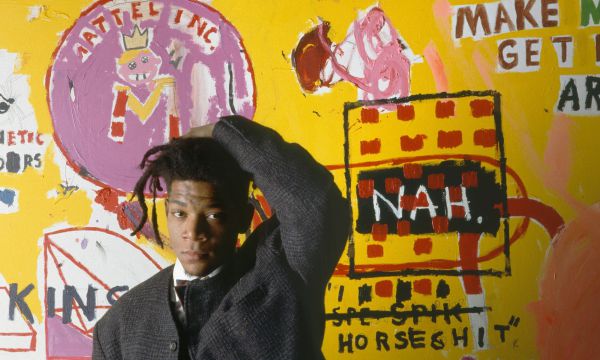 Hopefully, you liked our choice for his best paintings. There are many more paintings done by Jean-Michel Basquiat, but we hope that we picked the best of the best.