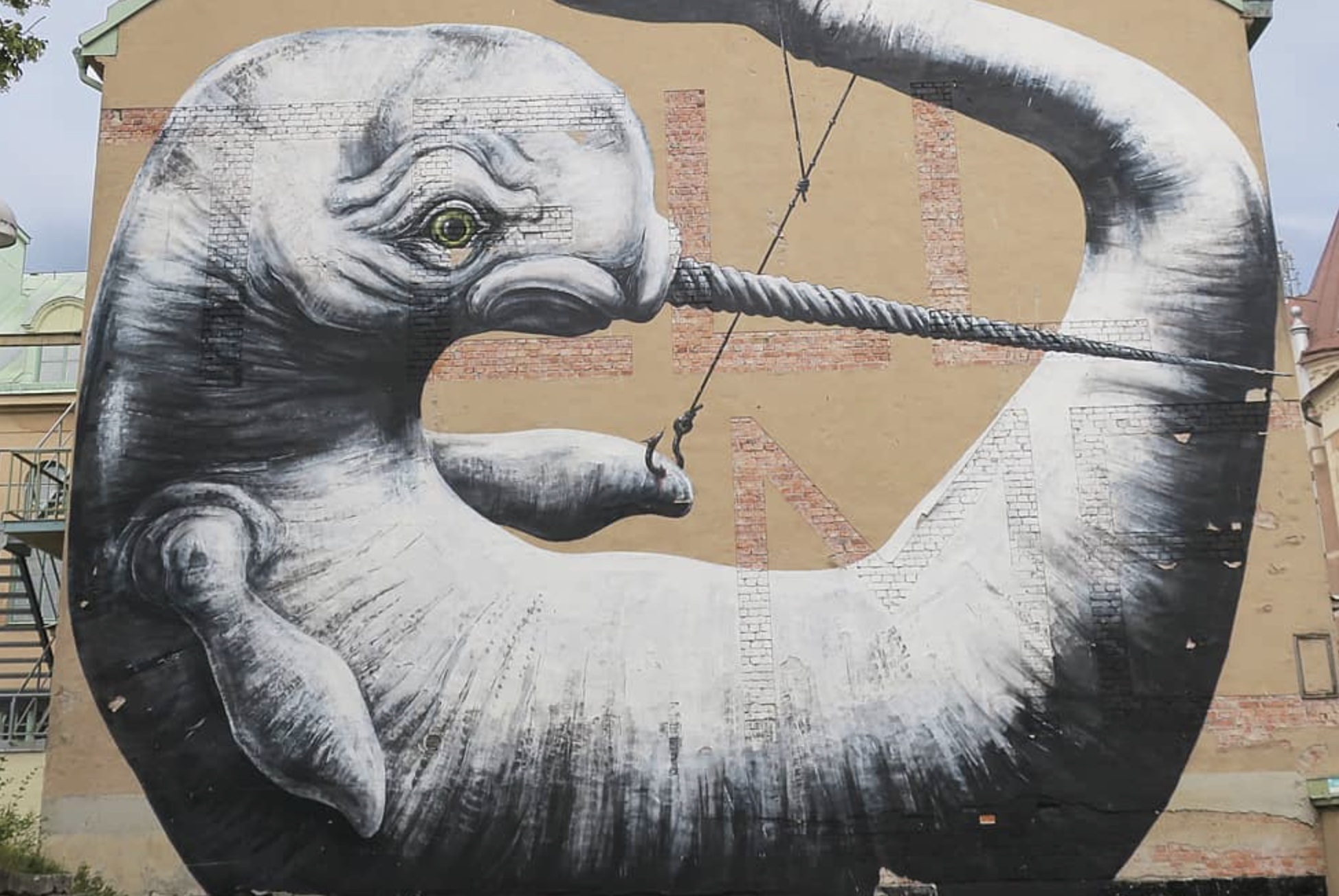 ROA is a pseudonym used by a Belgian street and graffiti artist. He has worked on many streets across Europe, but also in the United States, Asia, Africa, Australia, and New Zealand.

He is recognizable by his wild or urban animals and birds. They are almost always native to the area where he paints.

And he is also recognizable by his minimal color palette. He uses mostly white and black colors, but sometimes creates works using vibrant colors for the flesh of internal systems within the animals.

Catching a bird in flight is something many photographs aspire to do. It is hard to catch that perfect moment. It seems it is easier to draw it. We just love how he manages to paint this graffiti on two parts of the building.

You might think that the pig is one of the simplest animals to draw. It is a common domestic animal. But what ROA does in a magnificent way is paint all of the emotions on the pig. We take pigs for granted, which many vegans will tell you.

We mentioned in the previous painting how ROA manages to capture animals’ emotions in his work. This is just amazing. You would think ROA understands animals better than many people.

Birds are his favorite subject for drawing. He paints them mostly in their natural environment. We saw a bird flying, now we have a bird on a wire, which is often their natural habitat in big and urban cities.

Another aspect of his art is the ability to combine seemingly impossible to pair animals. For example, a bear and a buffalo. One is a domestic animal, and one is a wild animal. But together, they deliver a powerful message.

We said at the beginning that the only reason why ROA uses colors is to show the intestinal organs and systems of the animals. It is his way of showing our cruelty toward animals. Look at this skimmed pig, and try to stay unfeeling.

We are not only cruel towards pigs and other domestic animals we use for food, but we are also cruel towards birds. This pierced eagle shows the cruelty of the humankind in its worst display. The eagle is fighting for survival as he is trying to remove the arrow from his chest.

Narwhals are mythical creatures. They are some type of a unicorn of the sea. Often called “toothed whales” because they have teeth in their mouths. They are recognizable by the large tusk, and live in the waters around Greenland, Canada, and Russia. They are just one of the two living species of whales in the family Monodontidae, along with the beluga whales.

Crocodiles are large reptiles that live throughout the tropics of Africa, Asia, and America. They have front ends that are more pointed and V-shaped, which is the main difference between a crocodile and an alligator.

This painting perfectly illustrates how we treat animals. Cruelty of mankind is the biggest enemy for animals worldwide. And we ought to do something about it.

Animals and birds have organs as well. And they look quite similar to what we have. They have a heart as well. This painting perfectly shows the anatomy of a bird.

Many people do not know this, but tortoises are actually a reptile species. They are distinguished from other turtles by being land-dwelling. Many other turtle species are at least partly aquatic.

Can you guess what is this bear pondering? Probably how to survive in this cruel world. The beauty of this painting is in the positioning of the bear, and everything around it. It looks like she is sitting on the door of the building.

There was a period a few years ago when owls were some of the most popular animals. The owl accessory took over the world. And in the spirit of that popularity, ROA made a graffiti with the popular bird.

People often ask can a lionfish kill you? Well, they have venom in the needle-sharp dorsal, pelvic, and fins. But the venom is not deadly to an otherwise healthy human being. However, envenomation can cause an immense amount of localized pain and swelling. The lionfish, however, is a specialty delight in some Asian countries.

You can say  this is a tribute to stray dogs everywhere in the world. They are hungry, starving, and ill. And they are not on the streets because they like it. They are there because we left them there. Without food, they become extremely thin and weak.

Some would say that a chameleon without colors is just absurd. But this one looks amazing even in a black and white. Their colors and ability to adapt to the environment is their greatest strength.

You probably haven’t seen a more creepy image of a squirrel. We have to admit that this squirrel resembles a lot of a rat. And that is just ROA’s view.

Africa is the land of some of the rarest species in the world. And the continent is also native home to some of the most unique and remarkable creatures that have step foot on Earth. That list includes the elephant, the rhino, giraffe, and more.

What ROA manages to do in a magnificent way is present some of the cute and adorable animals in a creepy image. He did that with the squirrel, and now we see the octopus in a similar setting.

This hawk is just struggling to make it. And the positioning next to the subway is perfectly chosen. Just for info, if you see an injured hawk, make sure to cover it with a towel, and keep the wings tucked into the body. Gently put it in a box, and take it to the vet.

Elephants have long been circus animals. They serve the purpose of our amusement. But that has to change. And we can do something about it. This painting shows them in a classic circus setting, performing tricks for the audience.

When you think of bats, you usually think of Batman, and those scary bats. But in the same way ROA can make cute animals look spooky, he can make spooky animals look adorable. Just take a look at this bat.

Snails kissing is one of nature’s best images. Same as they do everything else in life, they do it slowly. And it takes them a couple of minutes to reach one another. But the result is an amazing image of two souls coming together.

One of the misconceptions is that rattlesnakes can kill humans. Yes, they can bite. But the reality is that they rarely, if never bite unless provoked or threatened. The bites are seldom fatal if they are treated promptly. However, rattlesnakes can prey on other smaller animals for food.

What is the inspiration behind this painting is up for you to decide. But horses are another animal that we mistreat on a daily basis. We use them for pulling cargo, and other working tasks.

The Dragon Lizard is the largest lizard in the world. His length can reach 10 feet, and he is usually found on the Indonesian islands. He is also known as the Komodo Dragon, a species of lizard found on the island of Komodo.

Armadillos are cute and adorable animals. But they can also transit the leprosy when they attack using their claws. Armadillos are known to carry the rabies, a disease that can paralyze any animal that is affected. While they do not bite, they can be risky for dogs and cats because of the diseases they carry around.

Herons resemble birds, but they differ from them. One important difference is the way they fly. Herons fly with their necks retracted, not outstretched. And they are part of a group of birds that have powder down.

If this image does not make your stomach ache, then we do not know what will do it. Deer are cute and adorable creatures, but often hunted for their meat. And this is how a deer skeleton looks like.

Birds reproduce by laying eggs. In this image, ROA has managed to capture the natural reproduction in a wonderful way.

What is the animal in this graffiti you ask? It can be any animal. And that is exactly the point. No matter which animal it is, their skeleton is not something we want to see.

You would think that a wild animal like the wolf will inspire fear. But not in this graffiti. Here, he inspires only condolences with the fact he is losing his natural habitat.

There are only 1500 numbats left in the wild. And if we continue destroying their natural habitat, things will get only worse. They a marsupial animal native to Australia, and is listed as vulnerable and nearly endangered.

We finish off with ROA’s favorite subject, birds. In this case, we have a crow, which is one of the uglier looking birds. But in this graffiti, he looks amazing and magnificent.