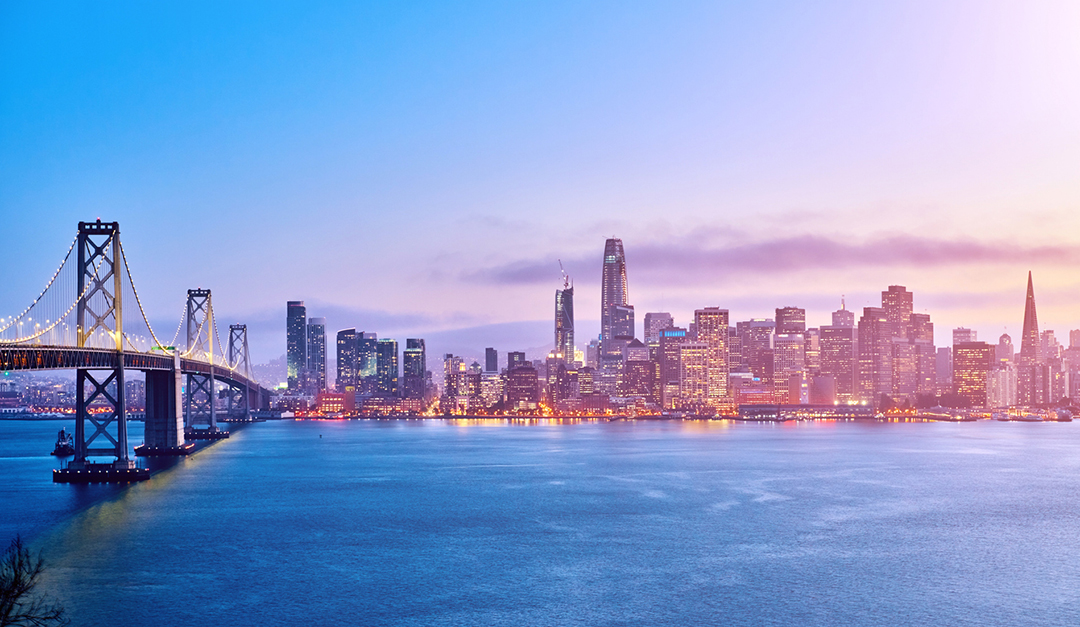 Some of the icons include the Golden Gate Bridge, Alcatraz Island, the Palace of Fine Arts, Lombard Street, and many more.

We said that one of the things that define San Francisco architecture are the many distinctive home styles. The city is home to many different house styles. Here is a quick breakdown of some of the housing options.

One of the most famous styles for homes and houses in the city, more than 50,000 houses were built between 1849 and 1915. They follow Victorian Style and Edwardian architectural style.

Yes, thousands of them were destroyed during World War I and World War II. Yet, many still remain as a symbol of the unique architecture of San Francisco.

The city would not be as popular without these stylized homes and their intricate colors and decorative accents.

During the late 19th century, Italianate row houses became popular across the United States. They feature narrow windows, columns, false parapet roofs, and slanted bay windows. They were easy to construct thanks to the readily available material in California. And that is wood. These houses are more common on the West Coast because the East Coast homes were made of stone.

The name says everything. They are identified by the thin wooden beams or sticks. The sticks extend from the first story to the second. They look like they are popping up the house.

With a rather simple layout, Stick houses emphasize ornamentation and decorative details. For example, shingles and trusses.

Stick homes are nearly identical in proportion to the bay windows Italianate homes. They gave residents a well-established rowhouse prototype.

No, these homes were not inspired by the Queen herself. Instead, they are similar to Victorian architecture homes, with one difference. The addition of some modern features like overhanging eaves, towers, porches, and a continuous gable roof facing the street.

It is a unique Californian architectural style drawing inspiration from Spanish architecture. They rose in popularity in the second half of the 1800s. In the mid-20th century, they were among the most popular homes in San Francisco.

You can identify them by the tiled roofs, plaster walls, and shuttered windows.

Let’s move to some of the notable buildings in the San Francisco area. If you are a fan of American architecture, San Francisco is the city to go to. You can see many architectural heritage landmark buildings there. Let’s check them out.

This suspension bridge spans the Golden Gate. It is a one-mile-wide strait connecting the San Francisco Bay and the Pacific Ocean.

Declared as one of the Wonders of the Modern World by the American Society of Civil Engineers, the bridge is a recognizable symbol of San Francisco and California.

The concept started with journalist James WIlking, who promoted the idea of a bridge across the Golden Gate. He argued such a bridge would bring so many benefits. Forty years later, the idea was revived. Joseph Straus conducted a survey of the proposed site for the bridge.

Straus was fascinated and began drawing up plans and making calculations for the construction. Today, it is one of the most beautiful, and certainly the most photographed bridge in the world.

Located in San Francisco, the small island was developed with facilities for a lighthouse, a military fortification, a military prison, and a federal prison.

The federal prison operated from August 1934 until March 1963. It is the most famous or infamous prison in the world.

Today, the facilities on the island are managed by the National Park Service. It is the site of the abandoned federal prison and the oldest operating lighthouse on the West Coast of the United States.

Located at the foot of the Golden Gate Bridge, Fort Point was built to protect the Bay from naval attacks. The structure was designed to allow cannons to hit enemy ships at water level. It is the only one of its kind structure in the west.

Spanish Lieutenant Jose Joaquin Morag was the one to organize the construction. He wanted to secure Spanish control over the whole area.

The Presidio-style fort he built in 1792 had sufficient fortification and was clearly not strong enough to act as the main defense. So, in 1796, he redesigned the fort and gave it his name. Yet, the fort was built from adobe brick and constructed on sand. It was heavily damaged due to the weather.

William Pereira & Assoc. designed and opened this commercial building in 1972. The futurist skyscraper is the tallest building in San Francisco. It goes up to 48 floors. Made of concrete, glass, and steel, the cathedral-style top is the crown jewel of the building. Inside, there is a 6,000-watt beacon jewel light which is lit and viewable on special occasions.

Famous for its architecture, the building has a broad base that tapers as it rises and increases the stability of the building. It is an engineering marvel.

Established in 2001, the Gallery has a long history of making the lives of art lovers more beautiful. It was a predecessor of Frank Lloyd Wright’s Guggenheim Museum.

Designed by the same architect ten years earlier, the gallery is one of the few extant Wright retail spaces and his only design in San Francisco.

The 210-foot tower in the Telegraph Hill neighborhood offers panoramic views over the city and the bay. Built between 1932 and 1933, it was added to the National Register of Historic Places in January 2008.

Some call it Coit Memorial tower. It was dedicated to the volunteer firemen who died in the five major fires in San Francisco.

The monumental structure was originally constructed for the 1915 Panama-Pacific Exposition. But then it was completely rebuilt from 1964 to 1974. It remains the only structure from the Exposition that survives on site.

It is the most prominent building in the Marina District in San Francisco. It was conceived to evoke a decaying ruin of ancient Rome.

Palace of the Legion of Honor

This one is located on the headlands above the Golden Gate. It is a French neoclassical structure that houses an art museum gifted to the city by Alma de Bretteville Spreckels.

The design was inspired by the replica of the Palais de Legion d’Honneur presented by France during the 1915 Panama-Pacific International Exposition.

Peter R. Schmidt designed this house in 1886. It is the only intact Victorian home open to the public. This house survived the 1906 and 1989 earthquakes and stands as an example of upper-middle-class life in the Victorian era.

Famous as the most crooked street in the world, Lombard Street is famous for the one-way block on Russian Hill between Hyde and Leavenworth streets. There are eight sharp turns that make it hard to drive.

Famous for the steep, one-block section with hairpin turns, the street is a major tourist attraction. More than two million visitors per year come to visit. On a busy summer weekend, more than 17,000 tourists visit the street per day.

Another name for this famous San Francisco building is the Sentinel building. It is a Flatiron-style structure made of white tile and cooper.

Build in 1907 by Salfield and Kohlberg, the tower is a neighbor of the Transamerica Pyramid.

Let’s finish off the list of famous San Francisco architecture with the picturesque stretch of seven Victorian houses. It is one of the most photographed areas in the City.

In movies, print material, television, and similar media, pictures, and videos of the Painted Ladies are used to represent San Francisco. You can even see them during the opening credits of Full House.