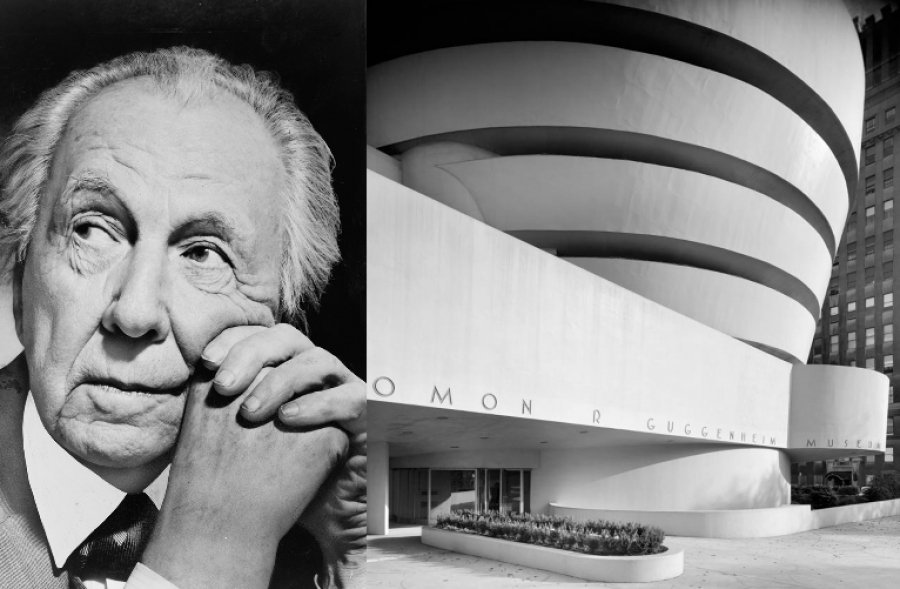 Traveling through the US, you’ll encounter different styles of architecture, some more modern than others. And if among those you encounter buildings with horizontal lines, flat or hipped roofs, solidly build with the landscape seemingly incorporated in the structure, then you might be looking at Frank Lloyd Wright’s creation. Born in 1867 in Wisconsin, Wright was an iconic American architect, designer, writer, and educator.

During his 70 creative years, Wright designed more than a thousand constructions, pioneered a new architectural school, and left a legacy that inspires even today. As he says, sources of his inspiration were: his mentor Louis Sullivan, nature, music, Japanese art, prints, and architecture, and the Froebel Gifts game collection for kids consisting of blocks with different geometric shapes.

Architectural Style And Philosophy of Wright

Creating an environment that would improve the lifestyle of people living inside that interior was the guideline in Frank Lloyd Wright’s architecture design. His buildings are practical and humane at the same time, focusing on the appearance and the interior that connects with people.

A group of architects, including Wright, started the prairie-style architecture, emphasizing nature, artisanship, and simplicity. It is the first original American style of building.

Wright coined the term Usonian to relate to the United States in general. He depicted this style as a distinct New World character a unique and free of previous architectural practices. It used flat roofs and was without cellars or attics.

His philosophy was organic architecture. It is a system of making buildings unified with the site. So, they become a part of the complete arrangement and harmony between human residence and the natural world. His own home looks as it grows from the land.

Wright’s Legacy And Recognitions Of His Work

Wright had a significant role in the architectural movements of the twentieth century, influencing architects worldwide. He was also a lecturer and a writer, publishing several books and many articles.

At the beginning of the 1920s, he designed a system of precast blocks reinforced by bars. This innovation enabled unlimited combinations in color, texture, and diversification.

Do you admire the great skyscrapers of New York City? Wright has the credit for those incredible designs in style known as Art Deco since they contain many elements of the work of this architectural genius.

Wright was proclaimed as “the greatest American architect of all time.” Some of his works are on the World Heritage Site. The U.S. and British Institute of architects rewarded him with golden medals. He got several honorary degrees. He was also an honorary member of several national academies of art and architecture.

The Frederick C. Robie House built 1909-1910 in Chicago, Illinois, exhibits the Prairie style to its fullest expression. The overhanging roof eaves, successive bands of art-glass windows, and the use of Roman brick emphasize the horizontal, are marks of this style.

The Frank W. Thomas House, also located in Chicago, was built in 1901. It was the first of Prairie houses with elevated rooms and no basement.

The Coonley House is a residential estate of several buildings on a small peninsula surrounded by the Des Plaines River in Riverside, Illinois. Constructed 1908–12, it is one of the largest and most elaborate Prairie School-homes ever built.

The second Imperial Hotel, built from 1919 to 1923 in Tokyo, is the most significant Wright’s construction in Japan. It is designed in the Maya Revival Style incorporating a tall, pyramid-shaped structure and decorated with Maya motifs. This makes the stunning and dramatic visual effect of the hotel.

The villa was finished in 1924, on a hilltop in Ashiya, with a view of Osaka Bay. Wright expresses his spatial ingenuity making it in four levels, although none is taller than two stories.

Jiyu Gakuen Schoolwas constructedin Toshima, Tokyo,using materials of wood and plaster. The four buildings that constitute it, with their extending horizontal lines to blend with the landscape, reminds of the golden age of the Prairie School design. It was finished in 1921.

Millard House, known as La Miniatura, is the first of Frank Lloyd Wright’s four “textile block” houses, constructed in 1923 in Pasadena, California. Seeking to integrate the Millard House with the land, This home is settled among trees using material found on the property. The house looks blended with the color of nature around it.

Located in the L.A. metropolitan area, the Ennis House is a residential dwelling built in 1924. Wright designed this home based on ancient Maya temples.

The house was voted for one of the top ten houses of all time in the Los Angeles Times. It’s considered a historical monument.

Herbert and Katherine Jacobs First House designed in 1937, is a single-family accommodation in Madison, Wisconsin. It is considered the first Usonian home: standing on concrete pad foundations, with the exterior as a combination of bricks, horizontal panels and glass doors, and a flat roof.

The Hanna–Honeycomb House situated on the Stanford University, built-in 1937, was Wright’s first work in the Bay Area and his preliminary work with forms that are not rectangular. It is a bold hexagonal design according to the bee honeycomb.

Fallingwater is perhaps one of Wright’s greatest masterpieces. Completed in 1937 at Mill Run, Pennsylvania, it has a fascinating integration with its natural surroundings, representing the organic architectural style. Being passionate about Japanese architecture, he put a strong emphasis on harmony between man and nature.

It is the most praised architectural work of Wright. It is said to be the all-time work of American architecture.

Wright designed the headquarters and administration building of S. C. Johnson & Son in Racine, Wisconsin, in 1939. It is unique with its “lily pad” columns.

The Solomon R. Guggenheim Museum in NYC is probably Wright’s most recognized masterpiece. They call it the “temple of the spirit.” The structure enables a new way of looking at modern art.

The Guggenheim was built in 1959 at 1071 Fifth Avenue on the corner of East 89th Street in the Upper East Side, vicinity of Manhattan. Its spiral shape evokes a nautilus shell with spaces flowing freely.

The Price Tower is a nineteen-story building in Bartlesville, Oklahoma, constructed in 1956. It is the only realized skyscraper designed by Wright. It looks like a tree that ran away from the woods, different from every angle, unsymmetrical like a tree.

The Monona Terrace is suited on the shores of Lake Monona in Madison, Wisconsin. It’s a marriage of the lake waters to the city, a mark of the organic architecture. It was built in 1996, almost sixty years after its original conception, followed by much controversy.