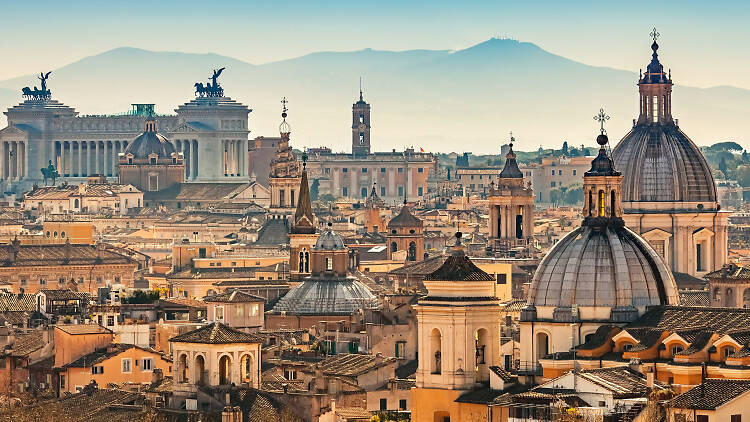 You will need more than a month to visit all of the notable Rome buildings. And that is only for those famous ones. The city is famous for its grand monuments, beautiful fountains, cobblestoned streets, and resplendent piazzas. Synonymous with romance, Rome is also called the City of Love and the Eternal City.

When you think of Rome, one of the first associations is the Colosseum. It is the most prominent example of ancient Roman architecture. But there are so many more Roman buildings in the city.

The architecture of Rome has developed over the centuries. Today, we will look at its rich history and then some of the most notable Rome buildings.

When people think of Rome, they think of ancient Rome and the ancient Roman period. But the city has gone through several transformations and important periods in art and history. Here is a quick breakdown of some of the periods that built Rome.

During the Roman Republic, Rome was considered the center of the known city. The Roman republic was one of the biggest empires at one point, and Rome was the capital of it. During this period, buildings were made of concrete and bricks.

The Romans build Roman temples on a high podium. Speaking of the period, the Colosseum is the most prominent example of ancient Roman architecture. But you can also visit the Roman Forum, Pantheon, Trajan’s Column, Trajan’s Market, the Catacombs, and many more.

Rome was not only the center of the ancient Roman period but also for some other periods in arts and history as well. The city has a rich and diverse Romanesque heritage. Some of the first Christian churches were constructed in Rome. Byzantine churches were based on the Roman basilica.

These churches were oblong or geometric, with three naves and full of rich golden mosaics.

Italy is the country where the Renaissance started. Rome is widely regarded as the second Renaissance capital of Italy. Florence is the first one. At the time, Rome was one of the most important cities in the world.

Some of the examples from this period include Palazzo Spada, Palazzo del Quirinale, Palazzo Venezia, and more.

You can see a pattern here. Rome was also the epicenter of Baroque architecture. Throughout history, the city has served as one of the most important centers for every art movement. Roman Baroque architecture was based on Classical symmetry, yet it broke many architectural rules.

Nowadays, you can find many huge and majestic Baroque squares in Rome. For example, St. Peter’s Square, Piazza Venezia, Campo de Fiori, and many more. The most notable Baroque structure in Rome is the Trevi Fountain by Nicola Salvi.

We have to remember that the Fascist regime ruled Italy between 1922 and 1943. They developed an architectural style similar to ancient Roman architecture. One of the most representative Roman buildings of this era is the E.U.R district.

We said before that you will need a lot of time to visit all of the notable Roman buildings. But let’s take a quick look.

The former Roman temple has also served as Catholic Church. It is a cylindrical building with a portico of large granite Corinthian columns.

To this day, it remains one of the best-preserved Ancient Roman buildings. One of the reasons is the Pantheon has been in continuous use throughout history. Since the 7th century, it serves as a church dedicated to St. Mary and the Martyrs.

Designed during the Flavian dynasty, it was first known as Flavian Amphitheater. Built of travertine limestone, tuff, and brick-faced Roman concrete, the building could house between 50,000 and 80,000 spectators. It was used for gladiator contests and public spectacles. Some of them included animal hunts, executions, and dramas based on Roman mythology.

The Latin name of the historical building is Forum Romanum. It is a rectangular forum (plaza) surrounded by ruins of important ancient government buildings. For many centuries, it served as the center of day-to-day life in Rome.

It was also the site of triumphal processions and elections, a venue for public speeches, criminal trials, and gladiator matches.

Arco di Constantino is a triumphal arch in Rome dedicated to Emperor Constantine the Great. Commissioned by the Roman Senate, it was designed to commemorate his victory over Maxentius at the Battle of Milvian Bridge in AD 312.

Some call it Castel Sant’Angelo, or the English version, Castle of the Holy Angel. It is a towering cylindrical building initially commissioned by Roman Emperor Hadrian as a mausoleum for himself and his family.

Later on, the Roman building was used by the popes as a fortress and castle. Today, it is a museum. At one point, it was the tallest building in Rome. Sadly, much of the tomb contents and decorations have been lost since the conversion to a military fortress.

The Papal Basilica of Saint Peter

The simple term is Saint Peter’s Basilica. It is a church built in Renaissance style in Vatican City. Planned by Pope Nicholas V and then Pope Julius II to replace the old basilica, it was built in the 4th century. Roman Emperor Constantine the Great built the basilica.

Many Italian artists were involved in the work, including Michelangelo, Carlo Maderno, Donato Bramante, and more. It is the largest church in the world by interior measure. Today it is a famous place of pilgrimage and serves liturgical functions.

Likely built between AD 212 and 216, they were the second-largest Roman baths. Or in ancient Roman terminology, thermae. They served as inspiration for many other notable buildings, including the original Pennsylvania Station in New York City and the Union Station in Chicago. The Senate of Canada is another modern building inspired by the Baths of Caracalla.

Today, they serve as a tourist attraction.

The Theater of Marcellus

The ancient open-air theatre in Rome was built in the closing years of the Roman Republic. Locals and visitors watched performances of drama and song.

Fun fact: Julius Caesar was murdered just before the construction began. It was 111m in diameter and was the largest and most important theatre in Ancient Rome. The theatre could house between 10,000 and 20,000 spectators.

Another name for this building is Palazzo Della Civilta del Lavoro. The everyday name is Colosseo Quadrato (square colosseum).

Some call it Swiss cheese because of the holes. The building in the EUR district in Rome was designed in 1938 by Giovanni Guerrini, Ernesto La Padula, and Mario Romano.

It is an example of Italian Rationalism and fascist architecture with neoclassical design .

Basilica of Maxentius and Constantine

Sometimes people refer to it as Basilica Nova, meaning new Basilica. It is an ancient building in the Roman Forum, the largest one in the Forum. It is also the last Roman basilica built in the city.

During ancient Rome, a basilica building was a rectangular building with a large central open space.

You would think pyramids were characteristic to Egypt, not Rome. But this one was built as a tomb for Gaius Cestius, a member of the Epulones religious corporation.

Today, it stands at a fork between two ancient roads, Via Ostiense and another one that ran west to Tibet.

The interior houses the burial chamber, a barrel-vaulted rectangular cavity.

One of the most important High Renaissance palaces in Rome, it is owned by the Italian Republic. It was given to the French government in 1936 for a period of 99 years. Today, it serves as the French embassy in Italy.

It was designed in 1517 for the Farnese family. When Alessandro Farnese became Pope Paul III in 1534, he expanded the building in size and conception.

The public museums of the Vatican City display work from the immense collection amassed by the Catholic Church and the papacy. Some of the most important Renaissance art in the world can be found in these museums. They contain more than 70,000 works, out of which, 20,000 are on display.

Pope Julius II founded the museums in the early 16th century. On the visitor route through the Vatican museums, tourists also see the Sistine Chapel and its famous ceiling decorated by Michelangelo.

Today it is a large complex of ruins. But back in the days, it served as a market. Some believe it to be the world’s oldest shopping mall. Shops and apartments in the market were built in a multi-level structure.

The Italian name for this church at one point was Chiesa di Dio Padre Misericordioso, translating to Church of God the Merciful Father.

It is a Catholic Church and community, many considering to be the crown jewel of the Cicariatodi’Rome Millennium project.

The church was designed to look like a ship, with the south side featuring three large curved walls of pre-cast concrete.

The large tomb built by the Roman Emperor Augustus is located on the Piazza Augusto Imperatore. It was one of the first projects initiated by Augustus in the city of Rome following his victory at the Battle of Actium.

Circular in plan, the mausoleum consisted of several concentric rings of earth and brick.

The Temple of Jupiter Optimus Maximus

The Temple of Jupiter, was the most important temple in Ancient Rome. Located on Capitoline Hill, it was the first building and the oldest large temple in Rome. Like many other temples in central Italy at the time, it shared features with Etruscan architecture.

It remained larger than many other Roman temples for centuries after.

The series of monumental fora (public squares) was constructed over a period of one and a half centuries. They were the center of the Roman Republic and the Roman Empire.

The Imperial fora are not part of the Roman Forum. Yet, it is relatively close to it. Julius Caesar was the first to build in that section of Rome. During the early 20th century, Mussolini restored the Imperial Fora as part of his campaign to evoke the glories of Ancient Rome.