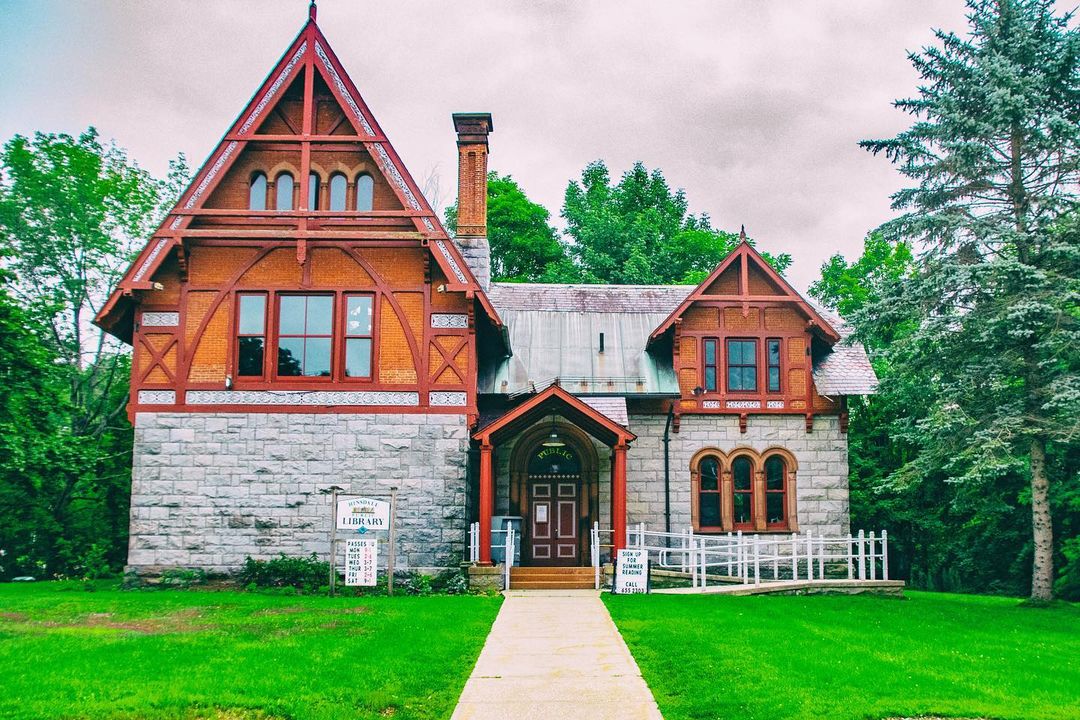 Earlier architectural movements and exotic, foreign styles inspired 19th-century architecture, which was adapted to the new technologies of the early modern era. With revivals of Greek, Gothic, and Renaissance designs, modern technical technologies and materials were applied. Historicism evoked national nostalgia in the Western world by using symbols inspired by bygone empires and cultures.

The employment of a range of historical styles, as well as the creation of new materials and structural systems, are two major hallmarks of 19th-century architecture. The first sprang from a 19th-century architect’s belief that he had no choice but to follow in the footsteps of their forefathers. The second feature arose as a result of the creation of new materials in response to changing industrial demands. Classical, medieval, and other exotic styles were used with the new ferrous building materials.

While the architect, who was mostly hired by cultured clients with Classical preferences, was certain that ‘Classical’ was the proper style of architecture, the architects of the 19th century – and their clients – were not so sure. They were also planning for a rapidly changing society, which was frequently chastised by sensitive and powerful critics. The established and tried Classical style of Greek art was pitted against the virtuous, noble, and romantic medieval Christian style.

Since the architects were preoccupied with the battle of styles, enormous changes in the industry were occurring. Mass production was made possible by the use of glass, iron, and finally steel. The machine tool industry, when applied to construction, provided a level of precision that enabled the installation of large, safe structures made up of uniform components. As the demand for factories, storage, and transportation in manufacturing centers and ports grew, new types of utility buildings evolved. The trains necessitated the construction of stations, massive bridges, and viaducts. The architects were not trained to meet the requirement for design, except perhaps to suggest a style, and the engineer-builder seemed to fill the void.

As a result of these great changes, today there are many landmarks and historical buildings around the world that are really worth seeing. Have a look at them below, and add them to your bucket list.

The Abbey Church of Saint-Denis

The main church in Vienna is St. Stephen’s Cathedral, often known as Stephansdom. The current Romanesque and Gothic form of the cathedral, which can be seen in the Stephansplatz today, was built on the ruins of two previous churches. St. Stephen’s Cathedral, Vienna’s most important ecclesiastical structure, has witnessed many significant events in Habsburg and Austrian history, and its multi-colored tile roof has become one of the city’s most identifiable icons.

Strasbourg’s Notre Dame Cathedral is an icon of the city. Built of pink sandstone, this marvel of the massive and delicate took nearly three centuries to create. Take some time to admire the exquisite and awe-inspiring sculpture both inside and out of this Gothic masterpiece. Also on display is a variety of stunning stained glass windows, including a 14-meter-wide rose window.

This Victorian-style house is immediately recognizable as the Halliwell manor from the popular TV show Charmed. Although the show is presented as in San Francisco, it’s actually located in Los Angeles. Originally structured in the 1880s for the counselor Daniel Innes, thus known as the Innes House. It’s designed in Eastlake style with Victorian details both in the exterior and the interior. It became a historical landmark in 1971.

In 1888, architect William Ohlhaber planned and built this Victorian and Bavarian Gingerbread residence for prominent German industrialist Hermann Weinhardt. Weinhardt, a furniture manufacturer, commissioned architect William Ohlhaber to create a gingerbread house that would evoke memories of his native Germany. In the winter, they would ice skate in the front yard, which was flooded.

This house is located in New Forest National Park. It’s widely known as the Brockenhurst Gatehouse, and although it seems abandoned with no curtains on the upper floor, it is said that this is the north lodge, while the summer lodge can still be rented as a holiday home.

The Victorian-era Ebenezer Maxwell House in Germantown was built in 1859. It was saved and restored in the mid-1960s, featuring aspects of the Second Empire and Gothic Revival styles, as well as more diverse architectural influences. The allegation that this Victorian beauty influenced the Addams Family’s home is the most intriguing.

The Empress of Little Rock

The Empress of Little Rock, also known as the Hornibrook Mansion, was built in 1888 and is Arkansas’ 7th Most Haunted Hotel. It began as Mr. and Mrs. Holbrook’s private residence. After Holbrooks died, it was used as a women’s college, a boarding house, a nursing facility, and even apartments. The home was restored to its original Victorian glory by new owners, who turned it into an attractive bed and breakfast complete with antique furnishings and turn-of-the-century décor.

This is the old abandoned Lady of the Gulf Church in Mississippi Gulf Coast. Located in Bay St. Louis, it used to be a place of weddings, baptisms, and other Catholic services. Now, although the base remains intact, it has survived a devastating hit, leaving it abandoned. There are rumors that the inside, however, was a mess, but the structure is intact and was eventually repaired.

The Wooden Palace in Astashovo

A lovely wooden palace created by the legendary architect Ivan Ropet can be found in the Chukhlomsky district of the Kostroma area in Russia. Hidden between forests and abandoned villages, Martyan Sazonov built the mansion in the late 1800s for his second wife. He came from a peasant family, but that didn’t stop him from moving to St. Petersburg and establishing himself as a prominent construction businessman. The home became public property after Soviet rule was established, and it was used as a community school and library. The village became extinct in the early 1980s, but the Sazonov’s house remained abandoned in the village and quickly deteriorated. Fortunately, the home was purchased and refurbished a few years ago into the first forest hotel museum in Russia.

The Waddesdon Manor is a country house owned by the National Trust and managed by the Rothschild family, and one of their most-visited estates. It was built in the 1870-80s as a weekend residence mostly used for hunting and entertainment. Since then it was passed from generation to generation, and in 1957 was opened for the benefit of the general public. It has also been used as a filming place for many famous films and tv-shows.

This Cincinnati masterpiece, which opened in 1878, is a National Historic Landmark and one of the most gorgeous concert halls in the world. From the outside, this magnificent structure’s Victorian-gothic architecture is striking. The architecture contains symbolism that links to our forefathers’ lives and vocations. The three buildings that make up the famous Elm Street façade served as the city’s first convention center, and were early locations for nationally-acclaimed Industrial Exhibitions, firmly establishing the multi-use character of this distinctive site. Sporting events, conventional displays, and everything in between was all part of the programming throughout the 1970s.

This Queen Anne Brick house is located in Columbus, Ohio. It was built in the 19th century in the so-called German Village. It still remains there located on Deshler Ave. right in front of Schiller Park. It can still be visited today as part of the German Village Christmas lights.

Located right next to the Red Lion Hotel, Bayleaf Kitchen in Southampton’s High Street is housed in a c.1890 Flemish-style structure. Although the shopfront is relatively new, the two upper levels are covered in glazed ceramic tiles.

The Hinsdale Library in Massachusets

The Hinsdale Public Library, which was founded in 1866, has served the small town of Hinsdale, Massachusetts as a library and historical archive for over a century. The structure was created by Leopold Eidlitz and offers a unique blend of Gothic and farmhouse-style architecture, with most of the original woodwork still intact. Mrs. Mary P. Twinning had left a $5,000.00 bequest for the establishment of a library. The Kittredge and Taylor families added to it, bringing the total to almost $25,000. As a result, the Hinsdale Public Library Association was formed in 1866.

Le Grand Cafe is one of the oldest cafés near the Bourse and one of the last instances of this sort of late-nineteenth-century structure. Emile Janlet designed the canopy, which was completed in 1874, and a marquee was built in 1947. The sun tents above the shop windows were the only thing that this structure possessed at first.

The Grand Army of the Republic is located on the second floor of the Town Hall Rockville building, which was constructed in 1889-1890 to serve as the Town Hall. It is the world’s oldest continuously operational GAR hall, as well as the only one with all of its original items. The public can now visit the New England Civil War Museum, which features real stained glass windows and Civil War memorabilia. The Memorial Building was originally supposed to be made of wood, but it was eventually decided to be made of stone to match the nearby Congregational church. The Memorial Building was constructed by GAR veterans.

If you liked any of those buildings, get them on your bucket list and start exploring. Share your stories with us in the comments below.