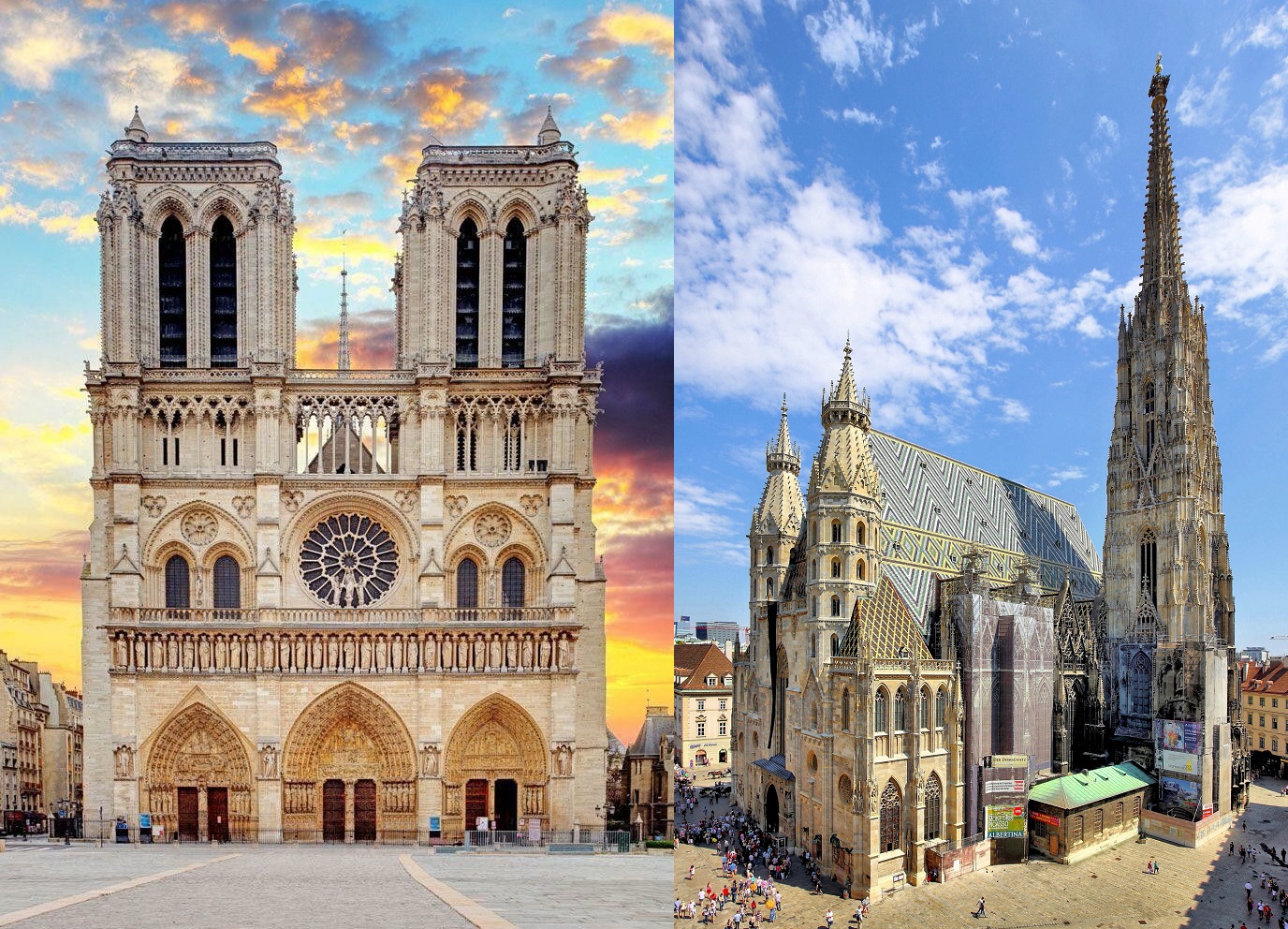 Gothic architecture is a European architectural style that emphasizes height and has a delicate and detailed look. Despite its French origins, the Gothic style may be found in churches, cathedrals, and other comparable structures throughout Europe and beyond.

In Europe during the Middle Ages, a new architectural style evolved. Known originally as Opus Francigenum, or “French Work,” this architectural style dominated European tastes—particularly those of the Roman Catholic Church—until the 16th century, when it was dubbed “Gothic.”

The style was a huge departure from the previous, more basic building systems that had predominated. The Gothic arose from the Romanesque architectural style, which flourished during a period of affluence and relative peace, allowing for centuries of cultural growth and grand architectural designs. Several notable cathedrals and churches were erected between around 1000 and 1400, mainly in Britain and France, providing architects and masons with the opportunity to create ever more complex and daring designs.

The Abbey of Saint-Denis in Paris, built around 1140, is the oldest Gothic edifice still standing. Beginning with Notre-Dame de Paris (c.1163-1345) and Laon Cathedral, cathedrals with similar vaulting and windows quickly arose (c.1112-1215). Soon after, a sequence of four unique horizontal levels emerged: ground level, tribune gallery level, triforium gallery level, and clerestory level. The geometry and harmony of the interior were enhanced by the arrangement of columns and arches utilized to support and frame these various elevations.

Rayonnant Gothic architecture, whose English counterpart is “Decorated Gothic,” is the next phase of Gothic architectural design on the Continent. Rayonnant Gothic architecture was distinguished by new geometrical decorations that grew more ornate throughout time, but with few structural advancements. In reality, throughout the Rayonnant period, cathedral architects and masons focused their efforts on improving the “look and feel” of the structure rather than maximizing weight distribution and creating higher walls. Pinnacles (upright constructions, generally spired, that topped piers, buttresses, or other exterior elements), moldings, and, most importantly, window tracery were all added as a result of this strategy (such as mullions).

Many town halls, guild halls, and even private dwellings feature flamboyant Gothic designs. Few churches or cathedrals were built wholly in the Flamboyant style, with Notre-Dame d’Epine at Chalons-sur-Marne and Saint-Maclou in Rouen being significant exceptions. Other notable examples are Chartres’ north spire and Rouen’s Tour de Beurre. Flamboyant Gothic architecture finally lost its way in France, becoming far too extravagant and intricate, and was replaced in the 16th century by classical Renaissance architecture brought from Italy.

The remarkable makeover of this medieval abbey church served to define Gothic architecture. In the mid-12th century, parts of the church were renovated under the close direction of Abbot Suger. The old structure was dismantled to make room for a new, unique piece of architecture that utilized cutting-edge technology on the west façade.

Notre Dame is the first church that most people think of when they think of Gothic architecture. The cathedral represents Gothic architecture at its best, from its massive rose windows to its flying buttresses and gargoyles. The church’s construction began in 1163, and its plans were influenced by Saint-Denis’ revolutionary new architecture. After flying buttresses were constructed to support the roof’s weight, it was essentially finished by 1260. The church, which is one of Paris’ most visited sites, has undergone numerous renovations and reconstructions throughout its history. The spire and much of the roof were destroyed by a fire in 2019. The building has since been secured, and the reconstruction is still underway, to be finished in time for the Paris Olympics in 2024.

Chartres Cathedral is an unusual mix of early and late Gothic due to the numerous fires that devastated the structure. For example, the right spire on the north façade was erected in a plainer, early Gothic style, which contrasts sharply with the left spire, which was built in the 16th century. That spire was designed in the Flamboyant style, with intricate bar tracery and additional sculpture. Chartres has three facades, each of which is adorned with hundreds of sculptures depicting biblical stories. The Cathedral was saved from destruction during both the French Revolution and World War II because of the efforts of locals and an American colonel who defied orders to destroy it.

The current Reims Cathedral was created after a fire destroyed the early Gothic construction, and it is a stunning example of High Gothic architecture. In its place, a church that pushed Gothic to its utmost was built. The west façade features extremely deep portals, allowing for a complicated sculptural scheme. Illiterate churchgoers would have been able to see what they couldn’t read thanks to this sculpture. A huge rose window with thin tracery sits over the central gateway. The gallery of kings, which is made up of 56 15-foot-tall statues, is located on the level above the rose window. The inside features four-part rib vaults that give the space a more consistent appearance while also adding height.

The Amiens Cathedral is a superb example of High Gothic architecture, having been built in about 50 years, which is a relatively short period in Gothic construction. It is France’s largest cathedral and represents the pinnacle of attempting to attain the skies. To put things in perspective, Amiens could fit two Notre-Dame Cathedrals. After a fire destroyed the previous Romanesque cathedral, construction began in 1220. The excellence of the sculpture on the main façade of the cathedral is particularly well-known.

The Milan Cathedral has a roughly 600-year history, with building beginning in 1386 and ending in 1965. It’s an excellent example of how Gothic architecture evolved outside of France. The façade, which features over 90 gargoyles, 135 spires, and around 3,400 sculptures, is the building’s most famous feature.

Under Henry III’s watchful attention, London’s famed Westminster Abbey evolved into its current form. In 1245, he began construction on the abbey church, which was designed in the Anglo-French Gothic style. It has flying buttresses, rib vaults, rose windows and pointed arches, as well as other Gothic characteristics. Since 1066, the church has served as the residence of every English and British royal, and it continues to play a significant role in British culture.

St. Stephen’s Cathedral in Vienna is a mix of Romanesque and Gothic architecture. It has a towering spire that dominates the skyline, but it is most known for its brightly colored roof. The roof has a zig-zag design and a mosaic of a double-headed eagle. It is covered with 230,000 glazed tiles. There are 22 bells, 18 altars, and a big stone pulpit that is a magnificent example of Gothic sculpture in the cathedral.

Seville Cathedral in Spain is not just the world’s largest Gothic church, but also the world’s largest cathedral. It is noted for its massive size, exquisite tracery masonry, and the utilization of a former mosque minaret as a bell tower. It was completed in the early 16th century.

Florence’s cathedral, known as the Duomo, is famous for its spectacular dome, which was designed by Filippo Brunelleschi. While building on the Gothic-style structure began in 1296, it was not completed until 1436. The neo-Gothic style multicolored façade you see today was finished in 1887.

Salisbury’s cathedral is one of the few great specimens of Gothic architecture, and it is both a gorgeous structure and a world record-breaker. It has the highest church spire, the most notable cathedral cloister, and Britain’s greatest monastery, all of which were built between 1220 and 1258. It also houses one of the world’s oldest working clocks and one of the original copies of the Magna Carta, both of which are vital to the UK and democratic nations.

Construction on this cathedral began in 1248 and was abandoned in 1473, remaining unfinished for 350 years before being restarted in the 1840s and completed in 1880. The Cologne Cathedral was Northern Europe’s largest and featured the second-tallest spires in the Germanic Gothic style. The cathedral has been damaged by tank battles and bombings, and it has been undergoing repairs since the end of the war.

The west front of York Minster is a fine example of English Gothic architecture, with tracery on the principal window. The stained glass of York Minster dates from the 12th century, with construction beginning in 1220 and finishing in 1472.

The Saint Vitus Cathedral in Prague, which was built over a period of 600 years, is at the heart of the Czech Republic’s religious and cultural life.

It houses treasures ranging from the 14th-century mosaic of the Last Judgement and the tombs of St Wenceslas and Charles IV to the baroque silver tomb of St John of Nepomuk. It is considered one of the most richly endowed cathedrals in central Europe. Its construction began in 1344, when the building’s main layout, which was inspired by French Gothic, was completed. Over the next few centuries, Renaissance and Baroque elements were added.

The Black Church in Brasov, Transylvania, is a remarkable Gothic church. It was created by the city’s German community and is still Romania’s most important Gothic-style monument. Construction began sometime between 1383 and 1385 in the late 14th century. It was finished shortly after 1476. It is also one of the area’s largest and most influential Lutheran congregations.