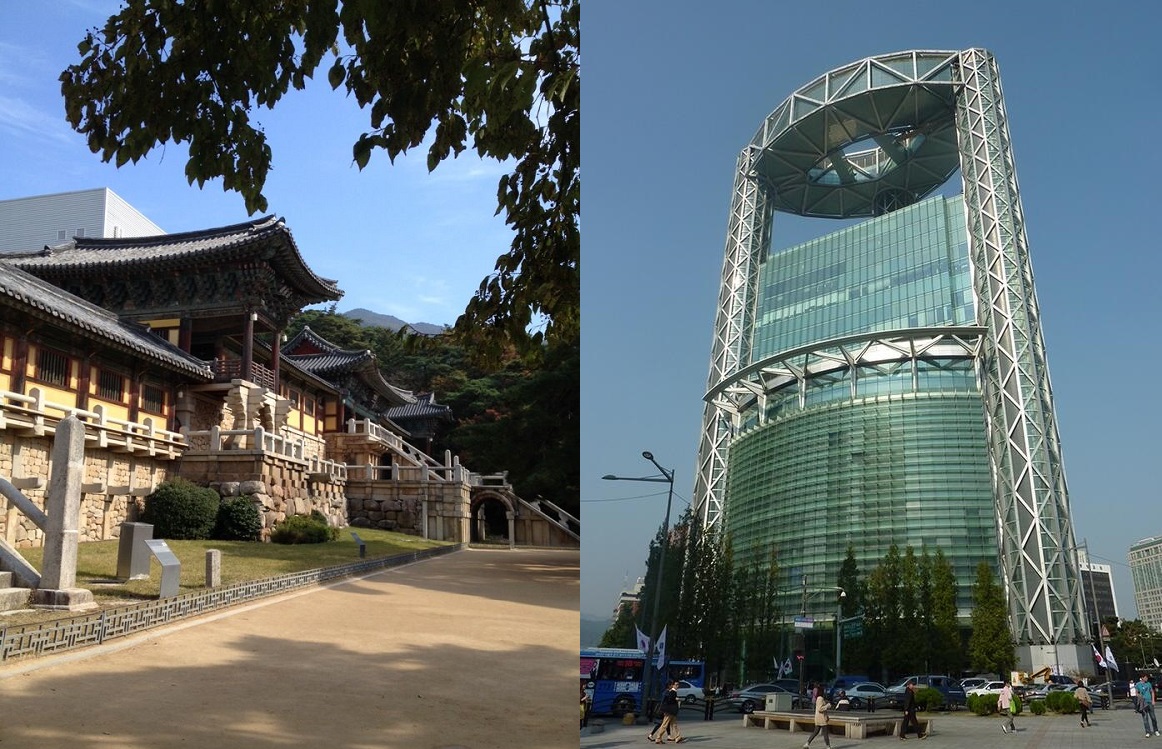 Naturalistic inclinations, simplicity, economy of shape, and the avoidance of extremes. This is what defines Korean architecture, as do the other arts in the country. In Korea, a steeply sloped Chinese roof was transformed into a softly sloping roof. Sharp angles, powerful lines, steep surfaces, and bright colors are all avoided in this design. It usually exudes a sense of inner peace.

The Joseon Dynasty is responsible for the majority of historical structures in Korea today. Only stone tombs and fortifications from the Goryeo and Three Kingdoms eras have survived. Open areas, graceful lines, and natural harmony were all priorities in Joseon architecture. Larger constructions followed the Chinese traditions of curving tile roofs, wide courtyards, and conspicuous wooden beams and pillars, while lower-class dwellings were restricted to mud walls and thatch.

Korean architecture has evolved its own distinct and recognized features. Builders chose materials such as wood, stone, and paper over brick. Buildings in China tended to be red and gold in color. Koreans, on the other hand, used brilliant green, blue, white, red, and yellow dancheong, or painted patterns. White plaster walls were employed in lower-class dwellings, which were put into rough wood frames. In general, Korean architecture had more modest proportions. In favor of natural beauty, gardens and towns put less stress on precise symmetry.

The skillful blending of wood and stone to construct attractive and expansive multi-roomed structures with clay tile roofing, enclosures within protective walls, interior courtyards, and gardens, and the entire put on a raised platform, often of packed earth, epitomizes ancient Korean architecture. The local topography of buildings was also significant, as architects attempted to merge their designs gracefully with the natural surroundings and make use of spectacular vistas. From Bronze Age dolmens to the massive domed enclosures of ancient Korean monarchs, Korean architects’ work may be seen in fortress walls and tombs throughout the peninsula.

Small semi-subterranean homes constructed into the sides of hillsides were typical for Bronze Age Korean communities. They had thatched roofs and were either circular or square, excavated 1.5 meters into the earth. They usually had multiple hearths and were occasionally surrounded by wooden fencing. Hunam-ri, along the Han River, is an example of such a settlement, with 14 buildings dating from around 1200 BCE.

Except for some foundation stones that faintly suggest a building site, probably of a royal villa, on the Yalu River near Ji’an, China, no authentic specimens of Kogury architecture exist. Three temple sites have been unearthed in the P’yngyang area, dating from the late 5th or early 6th century. These were built on low terraces, and the central structure in each was an octagonal timber pagoda with sides of 33 feet (10 meters). The pagoda was most likely a towering, multistory edifice similar to the Yingning Temple pagoda in Luoyang, China, which was completed in 467 CE. This layout, with one pagoda and three surrounding halls, appears to be the earliest Buddhist temple design. A Paekche temple site in Puy and the Asuka-dera temple site near Kyoto, Japan, both have the exact same layout. A central octagonal wooden pagoda was also present in the Paekche temple. The Kogury-Paekche pattern was modified to a one-pagoda (south) and one-chapel (north) arrangement in Silla, as seen in the well-known Hwang’yong Temple of Kyngju.

Korean institutions were dramatically changed following the unification of the Korean peninsula into the Kingdom of United Silla. United Silla absorbed the fully formed civilization of China’s T’ang Dynasty while also developing its own cultural character. The T’ang introduced new Buddhist sects, and Buddhist art flourished. It was a time of peace and cultural progress in the arts, with a new level of grace and elegance on show.

The Joseon dynasty came to power in 1392, bringing with them like-minded men entrenched in Neo-Confucianism, which had quietly spread into Korea from China during the fourteenth century. This resulted in the state gradually shifting its patronage from Buddhist temples to Confucian institutions, resulting in a new atmosphere that was rather unfriendly to Buddhism.

New architectural paradigms were inspired by Neo-Confucianism. Many communities built jaesil, or clan memorial halls, where extended families established facilities for communal remembrance of a distant ancestor. The government erected jongryo, or memory shrines, to honor outstanding acts of filial piety or devotion. Beyond these archetypes, Neo-aesthetics, Confucianism’s which prioritized practicality, frugality, and natural harmony, established a unified architectural style throughout Korea.

With the armistice following the end of the Korean War (1950-1953), a protracted era of development began for diverse architectural styles dictated by foreign nations. Stalinist and absolutist architecture, sometimes brutalist, was favored in the north. North Korean architects studied in Moscow or Soviet satellite cities and returned with communist worker styles and big celebratory people’s architecture on a large scale. Almost all architecture was government-sponsored, and there was a lot of consistency in terms of function and aesthetics.

In the south, the pragmatic need to rebuild a country wrecked by genocide and later a civil war led to a factory system that produced simple, inexpensive, throwaway buildings with no specific style. Aesthetic considerations were given little weight. It was fortunate that most of this occurred in the urban areas.

For young architects, individuality and innovation became the new cause; yet, the country as a whole was sluggish to break away from ancient customs and appreciate good architectural aesthetics as crucial to the sense of a village, town, or city. Changes were sometimes forced in the face of vehement opposition, and new buildings arose at a significant personal cost to the architects and builders, as well as a great deal of tension.

Cultural and museum structures have followed suit; city halls and public service buildings are more often than not designed in the New York or Chicago styles, rather than the London or Paris styles. Retail stores, clothes stores, bistros, and cafes contributed significantly to the emergence of new architecture. Foreign firms establishing Korean headquarters brought with them a whole new architectural spirit with which to define their own ambitions.

Namdaemun Gate, one of the Eight Gates of Seoul’s Fortress Wall, was built during the Joseon dynasty in the fourteenth century and is regarded as South Korea’s first national treasure. The gate, which had been damaged in 2008, was renovated and reopened in 2013.

Fortresses were once thought to be single-walled structures that would protect cities and villages, with a separate chamber in the mountains for evacuation. The Hwaseong Fortress, which surrounds Suwon’s city center and features King Jeongjo’s palace Haenggung, was built in a far more sophisticated manner, with battlements, parapets, and secret concealed gates for defense. UNESCO listed both the palace and the fortification as world-historic sites in 1997.

This shrine is the oldest royal Confucian shrine maintained from the fourteenth century, and it is dedicated to the ancestors of the Joseon Dynasty rulers. UNESCO designated it as a World Heritage Site in 1955. It is made up of three main gates, one for the admission of spirits, another for the entrance of royals, and the third for the entrance of ritual performers, each with a different orientation.

The Temple of Heaven, also known as Hwangudan Altar, was built in 1897 with inspiration from the sun and moon. The altar was made of stone, and animal sacrifices were performed in a structure with a yellow roof. Visitors can only see the octagonal shrine that remained after the temple was destroyed in 1913.

Gyeongbokgung Residence, built in 1395, is the Joseon dynasty’s largest and most important royal palace. Its geometry was destroyed, and the main front gate was shifted after it was destroyed at the turn of the twentieth century. The National Palace Museum and the National Folk Museum are both housed in the palace nowadays, making it a popular tourist destination.

Yangdong Folk Village, regarded as an important folklore material in South Korea, not only displays the remarkable vernacular element of Gyeongju during the Joseon period but it was also designated as a UNESCO World Heritage Site in 2010. The village’s distinctiveness is reflected in the stunning natural surroundings, with even the placement of dwellings, up and down the hills taking into account the site’s shape and terrain.

This plaza in the middle of Seoul, designed by the renowned Zaha Hadid, is not to be missed! It is the first project in Korea to use BIM digital design techniques to create a strong connection between the city’s history, culture, and nature. This plaza is used for exhibitions, performing spaces, and retailers, and it stands out with its spectacular envelope.

Seoul City Hall, completed in 2012, has a futuristic vibe with a curved glass and steel façade that reflects an ideal image of what architects are imagining for the future of architecture in Korea and around the world. The organic shape and curves are reminiscent of ancient Korean house and palace eaves.

The LEEUM Samsung Museum of Art, first opened in 1965, is a private art gallery and exhibition that consists of three museums, each designed by OMA, Mario Botta, and Jean Nouvel, three prominent and well-known personalities in the world of architecture and design. The complex houses artworks by worldwide and local artists and is a work of art in and of itself, making it a must-see for architecture and art enthusiasts!

The underlying concept behind this structure is defiance: defiance of the rules and standards that dictate how we think architecture should look. This multi-use structure, as iconic as it appears, is made up of a curved floor and a flat roof, accentuating its uniqueness. Despite its massive size, the tower appears to float lightly on the water underneath it. Definitely, a place to visit if you want to grab some cool photos for your Instagram account!

The Floating Islands of Seoul

Former Seoul Mayor Oh Sae-hoon is the father of the Floating Islands. Three man-made floating islands are available: “Vista” has a concert venue and a moonlight trail. The amusement island “Viva,” which means “cheers,” is said to provide a variety of cultural experience facilities. Finally, despite its name, “Terra” is an island dedicated to water activities. They are always connected by nice bridges, albeit not always, and are best seen at night when lighted by vivid light shows.

Daniel Libeskind, the star architect, is surrounded by controversy no matter where he goes or what he designs. This megalopolis monster’s overwhelming size and design is both eye-opening and scary. The six new towers are fashioned to reflect the ocean’s spectacular beauty and strength. The buildings’ curved shape plays with traditional Korean architectural notions. The grace of an ocean wave, the unique composition of a flower petal, or the wind-filled sails of a ship are all examples of natural beauty.

The Han River has many bridges, some of which are fairly impressive, but the crown jewel is likely one of the shortest and least frequented. Yeoido Island and the nearby southern shore are connected by the Saetgang Bridge. The Saetgang is a cable-stayed pedestrian bridge with an asymmetrical design. The swerving bridge is supported by a network of off-kilter cables that create angles that appeal to both architects and non-architects. Anyone can go there at any moment.

Despite current disputes between Korea and Japan, the generous folks at Phoenix Resorts chose Japanese architect Tadao Ando to construct the Glass House. The waves rushing over the rocky coast of southeastern Jeju Island are seen from two restaurants within.