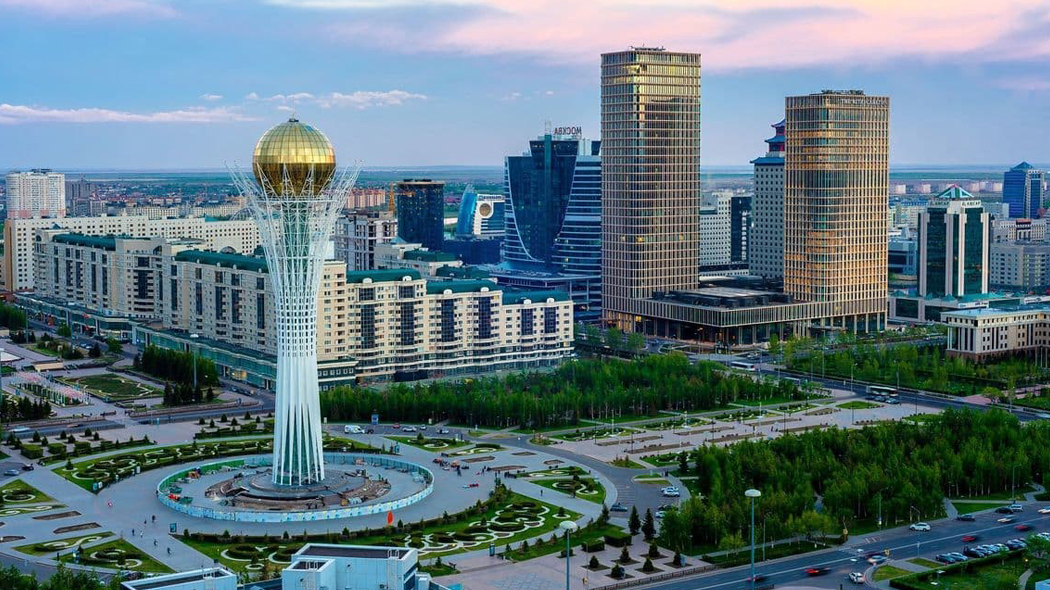 The architectural environment of Kazakhstan is shaped by a long and complicated history. As one of the now-former Soviet Republics, it has a wide cultural background and diversity, ranging from all sorts of structures, the ones that blend in and the ones that stand out. The country has a rich history even from ancient times up to the end of the 20th century which marked the beginning of a new era for Kazakhstan and its architecture. Today, a combination of futuristic buildings and monuments bears witness to the country’s long history of unconventional design, while many contemporary projects demonstrate how architects are attempting to create a new narrative for the country.

The use of small-scale materials resulted in vaulted and domed constructions, notably the mausoleum Balandy’s false dome, which is one of the oldest in Central Asia (4th c. B.C.E.). The Tagisken complex in the Aral Sea area, whose northern section is an old complex of religious structures, was built using a central plan, geometric structuring, linear composition, and ensemble character (14-12 centuries B.C.E.). The use of a modular system in the building of inscribed circles and squares in the designs of Tagisken temples showed the genesis of the architecture and actual architectural thought. Saka culture’s mixed settled nomadic nature was reflected in their home building (both mobile and permanent) and countless monuments to urbanization.

Medieval Kazakhstan saw the strengthening of many ancient temples and settlements from the Turkic period. Most notably, the ancient settlements of the Southern Kazakhstan Kos-tobe, Baba-ata Kuyruk-tobe, etc. This also led to the development of the city centers of Kazakhstan on the so-called Great Silk way (Otrar, Isfidzhab, Keder, Vesidzh, etc.) Baba Ata Castle, a remarkable medieval architectural relic, is located in Semirechye’s territory. The first stage of life on the city’s citadel dates from the sixth and seventh centuries. The square-plan two-story BabaAta castle (16 x 15 m) reached a height of around 6 meters and covered an area of 240 m2. The structure’s central core was an octagonal hall surrounded by two staircases, two corridors, and four square halls on the second floor, all of which were compactly arranged.

During the Soviet era, urban planning approaches were widely used in conjunction with the expansion of industrial and agricultural output, even in areas where natural circumstances were bad. Alma-Ata, the Kazakh SSR’s capital, became the epicenter of the development of a national architecture and architecture school. Due to the emergence of new compositional variants as part of modernism and an appreciation of regional (national) characteristics, the 1960s represented a qualitatively new level of architecture. Housing development on Lenin (Dostyk) Avenue in Alma-Ata is an example of Kazakhstan’s first integrated architecture and construction in a restored area (later used in the building of Astana, Uralsk, Semipalatinsk, Pavlodar, and Zhambyl centers)

As the country’s economy has grown during the previous two decades since the collapse of the USSR, it also paved the way for new architectural projects. Kazakhstan was the last of the Soviet republics to proclaim independence, and many public or bigger projects are currently being constructed in the gaps between existing infrastructure and municipal structures. A lot of projects, both governmental and private, depict the new architecture created in Kazakhstan since the turn of the century. They start to highlight how designers are looking to the future while reinterpreting the country’s complicated past when they work together.

The Astana Arena was designed to be a symbol of Kazakhstan’s developing new capital, with a stunning circular shape and a retractable roof that can be closed in extreme winter weather conditions to protect the players, fans, and playing field. The stadium, which is located on the highway between the airport and the city, is primarily constructed as a football/soccer arena, but it can also be used for other sports events, such as wrestling, judo, and boxing, which are popular in the nation.

The Astana Campus of Haileybury, one of the UK’s oldest and most distinguished private boarding schools, is situated on a 12-hectare estate with a closed area of 20 000 m2. The large and flat shape of the city, as well as the intricacy of the program and the climatic circumstances, presented several problems in establishing the architectural idea for this campus. This problem prompted the use of simplicity in this building design. Each of the four elements of the school curriculum (Pre-school, KS1, KS2, and Senior School) had its own set of spatial constraints, which were resolved into a single cohesive whole: the square.

A famous painting by the Russian artist Kazimir Malevich, called Suprematist compositions and the local building was the motive for the design of this “Palace.” The Shangyrak is a wooden crown that covers the top of a Kasakh yurt and has a central aperture above the fireplace. This local aspect of a Kazakh traditional home is reproduced in this proposal as a cylinder with a diameter of 156 meters and a height of 8 meters. The huge disc features holes and skylights that provide natural light into a central atrium first fully integrated Kazakh architecture and construction in a restored area (later used in the building of Astana, Uralsk, Semipalatinsk, Pavlodar, and Zhambyl centers)

In the Almaty foothills, Damir Ussenov and his architectural firm “Lenz Architects” constructed a home. The team’s major goal was to establish a distinct, secluded, and safe location where people may appreciate the animals. Through the dense thickets and tough terrain, the project’s innovative metal framework allows natural light to penetrate the inside. The exterior is made up of dynamic metal panels that cover the windows and isolate the house from the rest of the world, offering security and peacefulness.

The Alliance Bank, Kazakhstan’s tenth largest bank, aimed to expand its position on the international market to become one of Central Asia’s top financial institutions. The concept of its designers, Saraiva & Associados was made a key component of the firm’s corporate strategy as well as an architectural landmark in the capital. The design is inspired by a treasure chest, which protects its important contents. The new HQ, which is located in Astana’s new administrative and economic center, embodies key banking qualities like transparency and stability.

The team developed White Line in the middle of a location of exceptional beauty, keeping the house as modest as possible. The major objective was to build the project without causing harm to the environment. With a non-repetitive facade, the home seems distinct from different angles. The hue is brought indoors by the look and internal support, highlighting the house’s harshness and homogeneity. Panoramic windows on both sides of the house provide the impression of being in the middle of nature. From the outside, the glass has a feature that reflects trees and clouds, allowing the house to blend in as much as possible with its surroundings.

Minima | Maxima was created as part of the ‘Crawling Assembly’ by the Structural Stripes to allow a time of reflection. Inside Minima | Maxima, visitors are “transported to a bizarre, futuristic, science fiction universe, distancing tourists from themselves and discovering inside a sense of innocent wonder,” according to the team. The concept is unlike any other architectural environment in that it encourages people to explore and wander visually.

Palace of Peace and Reconciliation

The 62-meter-high pyramid component of the structure stands atop a 15-meter-high earthen block. This entire structure is elevated from the ground. Although the park’s vegetation rises to cover the lower floors, they are not basements. The construction is composed of five stories of triangles, each measuring 12 meters in length. Pale granite covers the lowest parts, which consist of three stories of triangles.

Hazrat Sultan, (meaning Holy Sultan) Central Asia’s largest mosque, was only recently completed, yet it has already established itself as one of the city’s most important religious and spiritual attractions. The overall area is 11 hectares, and the structure can accommodate 10,000 people. Because white has such significant importance in Islam, it was chosen as the primary color for the building’s front and interior. There includes prayer halls, spaces for reading the Quran (Islam’s fundamental holy text), a wedding hall, and seminar and lecture rooms.

This marvelous 105-meter-high building rises from a broad flat foundation in an elevated plaza. It consists of a 22-meter-diameter gold-mirrored sphere supported on a slender cylindrical shaft encircled by white branch-like girders that expand out at the top. Two elevators rise within the shaft to the viewing deck within the ‘egg,’ with a ticket booth and exhibition area at the base. The monument’s entrances are hidden below eye level, accessible only via stairs from the surrounding plaza.

The masted tower, which rises 150 meters from a 200 x 195-meter elliptical base to form one of Astana’s tallest peaks, is located at the northern end of the city. It includes an urban-scaled park with a 450-meter jogging track, as well as a wide range of retail and recreational amenities, such as restaurants, theatres, and entertainment spaces that can accommodate a diverse schedule of events and exhibits, spanning an area of more than 100,000 square meters. The park rises in undulating terraces to the height of the structure, and a water park with wave pools and slides weaves its way through the terrain.

The architecture and engineering of the cathedral, in addition to its outstanding beauty, fills you with admiration; at 56 meters, the Ascension Cathedral is one of the world’s highest wooden structures. It’s assumed that the church was constructed completely of wood. Although the majority of the construction is built of Tien-Shan spruce, there are a few nails, bolts, and other metal components. The church’s interior was designed by artists in Moscow and Kyiv, and the icons were painted by Nikolay Gavrilovich Khludov, a local artist and ethnographer.

The television tower atop Kok Tobe Mountain is one of the world’s highest and most earthquake-resistant television towers. It can resist earthquakes of any size. Although visitors are not permitted to enter the tower, it remains a tourist attraction. The city’s skyline is dominated by this massive building, which can be seen from practically anywhere in the city.

The most important architectural aspect of this mosque is that it has been cut out of the rock. This is a carved space with numerous finished chambers, not simply a cave. The mosque’s walls are covered in Arabic and Persian inscriptions. During his lifetime, the hermit Beket created four such architectural masterpieces in Kazakhstan. Thousands of believers visit this shrine each year.

The total height of the structure (including the spire) is 80 meters. The Grand Central Hall, the Hall of Press Conferences, the Gala Hall, and the Winter Garden are all located on the first floor. The second story houses the offices, while the third floor hosts international events and many halls (Marble Hall; Golden Hall; Oval Hall; Oriental Hall, which is shaped like a yurt; the Hall of Extended Negotiations). A Dome Space, a conference hall for the Government of the Republic, and the Library are all located on the fourth floor. The color gold is dominant throughout the complex, and the floor patterns were created using 21 different varieties of marble.