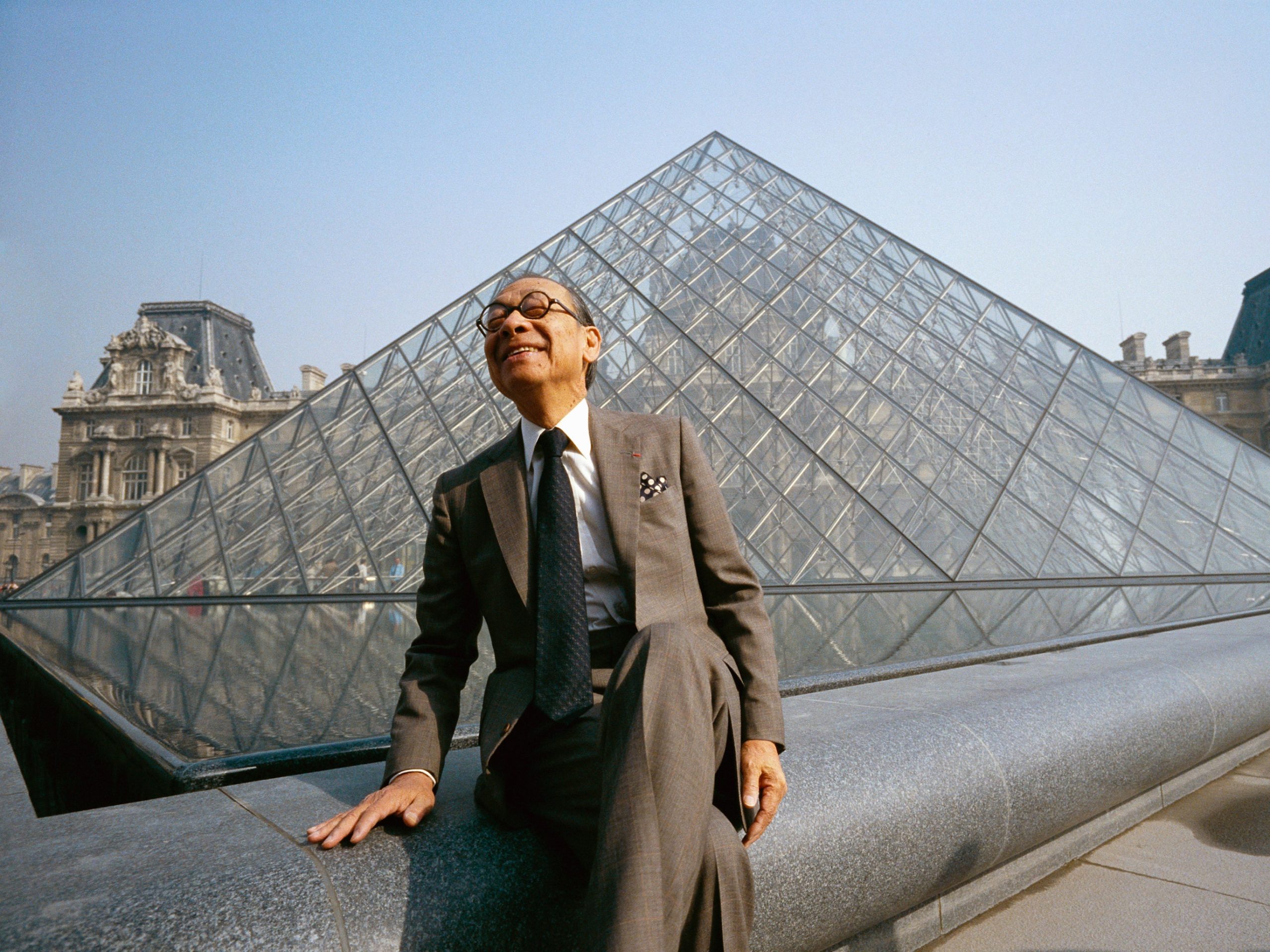 I. M Pei is one of the most renowned Chinese architects who has given this world outstanding architectural works. In 1983, he received the most prestigious Pritzker Architecture Award. He used the $100,000 prize to set up a fund for Chinese architecture students to study in the United States, provided they returned to work in China. He was an inspiration for many students, and his works are a preliminary example of how to combine the east and west, and the modern with the old.

While studying, his interest and attention were focused on pioneering modernists at the time. He collaborated with well-known architects such as Le Corbusier. Thanks to his talent and skill, today we have many significant architectural works, from the Louvre Pyramid to the John F. Kennedy Memorial Library. His designs were widely accepted and praised, but not the first time they appeared. When the large glass pyramid at the entrance to the Louvre Museum opened in 1989, it was not well received, but now it’s the Paris icon.

Pei did not like the styles, but he was considered a modernist. According to him, it was important to separate the essentials, eliminate the unnecessary, leaving clean lines and geometric shapes. But his architecture is not just geometry. His philosophy follows his design. It follows the basic belief of modernism that form follows function and adds its own interpretation, by inserting functional symbols, which is reflected in all its outstanding works. Despite his reputation as a modernist and famous for his forms based on combinations of simple geometric shapes such as triangles, circles, and squares, Pei has rejected the “International Style” and its implications of globalism. What is recognizable about Pei is that wherever he built, he was inspired by the local culture and tradition and combined them with modernism to finally get a world-famous building. He is an architect who has never neglected tradition. According to him, space is real architecture, and you have to have natural light. His projects show consistency in the idea that form follows function and that modernism is a bridge between the present and the past.

I.M. Pei has created masterpieces in modern architecture. These are just a few of the buildings in his mega-architectural career.

The Mesa Laboratory of the National Center for Atmospheric Research, Boulder, Colorado

This is one of Pei’s first major projects, completed in 1966. A timeless concrete and stone building overlooking the Rocky Mountains in the background. It was inspired by the rocky habitats of Native Americans in southwestern Colorado. The Laboratory was named Laboratory of the Year by the Journal of Industrial Research in 1967 and by the American Institute of Architecture in 1997. The final prize is for buildings that have “stood the test of time” for a period of 25 to 35 years.

East Building of the National Gallery of Art, Washington, D.C.

The east building of the National Gallery of Art in Washington is considered Pei’s masterpiece. Opened in 1978, it set extremely high standards for designing new modern additions to traditional buildings. It is Pei’s first museum. His idea was that the museum should be a sculptural work in itself, to be considered as a work of art where people are actively moving and looking carefully.

Rock and Roll Hall of Fame and Museum, Cleveland, Ohio

The offer to work on this project was a surprise to Pei. He was not a rock and roll fan and refused at first. But rock and roll in his seventies was his new challenge. After doing his research, he traveled with Jann Wenner, co-founder, and publisher of Rolling Stone Magazine, and attended various rock concerts, devoting himself to the project. The design is a combination of geometric shapes and cantilever openings, anchored in a 49 m tower that supports a glass structure, in the form of a double triangular pyramidal shape that extends to its base where it provides entrance to the main facade. The building houses an exhibition space, office space, shop, and café.

Situated in a beautiful, mountainous town Shigaraki, southeast of Kyoto, this museum is an incredible visual achievement. About three-quarters of the building is underground. The roof is a large glass and steel structure, while the floor, interior, and exterior walls are made of molten, beige limestone from France, the same material used in the Louvre. This museum is an art that is part of nature and complements and connects with it. The building was completed in 1997.

This fantastic skyscraper is one of the most recognizable landmarks of Hong Kong, known for its unique shape and design consisting of triangular frames covered with glass walls. There have been criticisms, especially from feng shui practitioners, who have not been consulted about its design solely for this facility in Hong Kong. The criticism was mainly about the sharp edges and the negative symbolism of the “X” shapes in the original design, which was later changed to some extent. Upon completion, the building, with its modern design, immediately became one of the most famous buildings in Hong Kong and the world. Changed the geometry of the city’s skyline.

This project was the last architectural challenge for Pei. Knowing little about Islamic art, in order to understand its essence, he began to study Islam and travel around the Islamic part of the world. He traveled and read Muslim texts for six months to learn about their history and architecture. According to him, he got his inspiration from the fountain of the 9th century Ibn Tulun Mosque in Cairo, where he found a strict architecture that revives the sun, with all its shadows and shades of colors. The result is an architectural icon composed of a five-story minimalist building and a two-story wing with geometric shapes and aesthetic details from the art and architecture of the Muslim world.

The Louvre is the only museum in the world whose entry is a work of art. This was the most difficult project for Pei. But, according to many, his greatest achievement. A masterpiece, an architectural icon that he gave to Paris, the city of light. Although Pei was initially criticized for his work, today it is his most recognizable architectural work. The Louvre was created with a technique called “structural glazing” and with this technique, Pei allowed natural light to enter the structure. This way, the pyramid fits the “city of light”. The pyramid of the Louvre Museum and the structure of the pyramid extends 71 meters from the base to the top. The construction uses 6,000 solid rods of structural steel and aluminum, and the inner frame has 675 diamond-shaped and 118 triangular steel windows built into it.

The Suzhou Museum is unique among museums across the world in that the building itself is the main attraction. Pei was born and raised in Suzhou. The museum was designed by Pei, incorporating a combination of traditional Chinese design and modern design. The sloping roofs, a classic color palette of black, white, and gray, and typical white stucco walls all reflect the character of the old city. The building’s materials and construction give it a contemporary air.

This museum is a stunning architectural tribute to the memory of John F. Kennedy’s life and presidency. Kennedy’s life was cut short, is symbolized by the truncated glass pyramid. The grand structure of the library at the extremity of the peninsula rises above the water in a distinguishing manner, with its understated yet omnipresent form. The JFK Presidential Library has a strong architectural presence that serves as both a memorial and a monument.

The Luce Memorial Chapel was built on the grounds of Tunghai University in Taichung, Taiwan, and is named after an American missionary from the late 1800s. I.M. Pei and Chen Chi-Kwan, an artist and architect, collaborated on the design.

Dallas City Hall (1978) is a dramatic geometric collision of form and function that was supposed to reflect all of Dallas’ residents. It is designed in a brutalist, modernist style, and for some, the construction was too avant-garde. The Dallas City Hall began construction in 1972, under the direction of Robert E. McKee and Pei, a contractor.

The Grand-Duc Jean Modern Art Museum was built on the remnants of Fort Thüngen, a former military bastion that guarded Luxembourg’s citadel, overlooking the city. It was built in 2006.

The Meyerson Symphony Center, Pei’s first concert hall, was constructed in 1989. It provided Pei with an opportunity to further develop his geometrical design approach, but he said that the building was very conservative.

Baltimore’s iconic office structure and the focal point of Maryland’s world-famous Inner Harbor is the World Trade Center Baltimore (WTCB). It is the world’s tallest regular pentagonal skyscraper, standing in the heart of Baltimore’s corporate, legal, financial, and tourism district since 1977. Henry Cobb and Pershing Wong, on the other hand, were the main architects in this case.

The Four Seasons Hotel, located in the heart of Manhattan, is not only one of the most luxurious hotels to stay in the world, but it is also a prime example of one of the city’s most notable architectural marvels. The design, created in collaboration with I.M. Pei and Frank Williams, is a timeless example of architecture sculpted from luxurious materials such as french limestone.

Pei won the Pricker International Architecture Prize in 1983 and used the $ 100,000 to launch a program for Chinese architects who want to study in the United States. Pey is an example of an artist fully committed to his work, he worked even in his late years. His works are a legacy left for the whole world, which we still admire today.