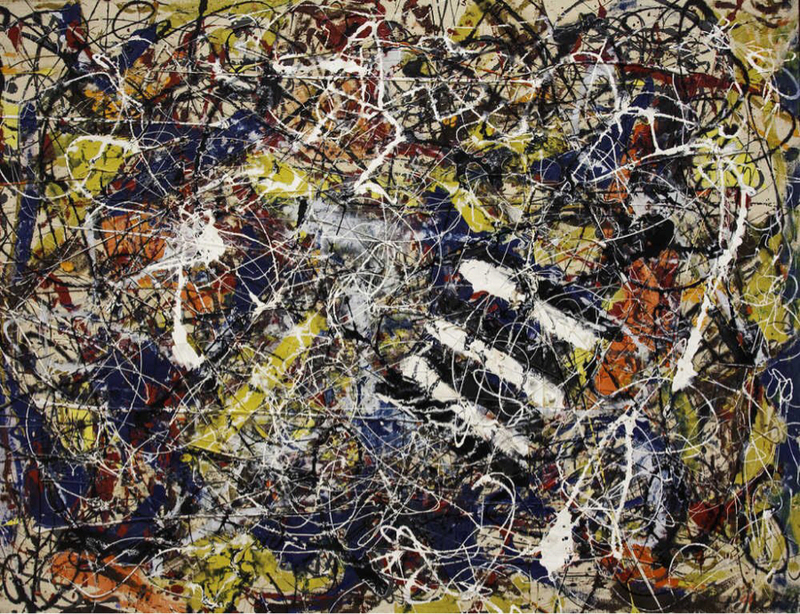 Paul Jackson Pollock was an American painter. He was a major figure in the abstract expressionist movement, one might say he was one of the founders of the movement.

At the beginning of his career, he painted representational objects such as people and animals. However, he then created a whole new art movement, called Abstract Expressionism. It is characterized by gestural brush-strokes or mark-making, as well as the impression of spontaneity.

Pollock was praised for his technique of pouring or splashing liquid household paint onto a horizontal surface. He said it enabled him to view and paint his canvas from all angles.

He died at the age of 44 in an alcohol-related single-car accident. He was driving. Four months after his death, he was given a memorial retrospective exhibition at the MoMa in New York.

He helped redefine modern art in the United States. During his lifetime, he enjoyed fame and notoriety, and was regarded as a reclusive artist. His pieces of art are extremely valuable, because they represent freedom.

This is one of his early paintings. It precedes his “action” paintings with the signature drip technique. You can see at the beginning he was more focused on objects such as people.

This painting is a unique in the sense it is different than his early works. In his early years, his work was characterized by a somber palette and congested pictorial space. However, this painting is bright, uncluttered, airy and almost colorful, making it revolutionary.

There was a time when he was greatly influenced by the Surrealism, and artists like Joan Miro and Pablo Picasso. This painting shows that period of his work.

Many of the painters in the 1940s explored primeval or mythological themes in their work. Pollock was no exception. Many believe the wolf in this painting alludes to the animal the suckled the twin founders of Rome, Remus and Romulus.

During the period between 1942 and 1946, he used a lot of archetypal figures in his paintings. They are referred as totemic, and there are two Totem Lessons by Pollock. Both evoke the contemporary enthusiasm for American Indian art.

This painting is part of the Accabonac Creek series, named for a stream near the property he purchased in 1945. He lived there with his wife, the painter Lee Krasner.

This painting was probably one of the first where he used his famous drip technique. Being that his studio was converted barn without heating or lighting, he aimed to work directly from his unconscious mind. As such, he implement a process of dripping and pouring paint over the canvas placed flat on the ground.

The painting glows with the brilliant light of midday sun on a thick meadow. It is a perfect example of the Abstract expressionist movement.

The painting was done the same year Mahatma Gandhi began his march for peace. The painting consists of built up layers of paint, as well as dripped enamel as the final touch. This type of paintings place Pollock at the center of the Abstract expressionism movement.

Look at the painting, and you will notice a maelstrom of swirling and angular lines, as well as broken forms. They are all pressed up to the front of the picture plane, just so the viewer can enjoy them in full display.

The painting is also known as Number 7. Later on, it was given the name Out of the Web at an exhibition. It is significant because it has more than the typical number of layers. Some believe it suggests Pollock was doubtful of the success, and he saved the work by applying the technique of the cut-out collages.

Talking about this painting, Pollock said that he paints on the floor. He feels nearer, and literally part of the painting. He also has a way to walk around the painting, and work from all four sides.

As he progressed in his drip technique, Pollock evolved and matured. This painting shows his maturity in the drip technique. You will notice fluidity of the lines and forms, and a more rhythmic manner of working.

This is the fourth most expensive painting ever sold. It was bought in 2016 by billionaire hedge fund manager and art collector Kenneth C. Griffin. He paid $200 million for the piece.

This mural-size drip painting is now available as wall art, home décor, and more. Its popularity has allowed the night mist to be digitally copied and sold at many art online shops.

Pollock received the commission to create a mural for the entry to Peggy Guggenheim’s new townhouse. He made the mural with oil paint on linen. It is Pollock’s largest canvas. It was signed and dated 1943, but the signature and date were added in 1947.

Considered one of his greatest works, it is located in the Tehran Museum of Contemporary Art. It is not for sale, but it is valued at $250 million, making it even more expensive than his Number 17a.

The title of this painting is a direct quote from Shakespeare’s play, The Tempest. The churning colors in the painting represent the shipwreck, in the same way it was described by Ariel in the Tempest. The top layers consist of poured skeins of house plaint, while the under layers are made with a brush and a palette knife.

This is one of the seven very different, but innovative works by Pollock in the category of Action Painting. It was created in 1946, when he was developing a new technique that made him famous. The painting displays hurried movement of paint on the canvas, but it is all controlled by the artist.

Some will say this is his most famous work. It is basically a collage of colors spattered on a canvas, resulting in masterful shapes and lines.

The legend behind the painting is that his friend Tony Smith found Pollock severely depressed in his studio. Smith started the painting to distract the artist, and then Pollock took over. The painting was purchased by the National Gallery of Australia in 1973. It remains one of the major paintings in the gallery.

This painting belongs in the San Francisco National Museum of Art. Unlike most of his Number paintings, it is done in black and white.

Alchemy is a celebrated painting by Pollock. Peggy Guggenheim managed acquire the painting. Recently, it was on view for the first time in the United States since 1969.

Pollock made this painting in the early years of abstract expressionism. The style was emerging in the 1940s, following World War II. It was inspired by the book the Whale by American writer Herman Melville.

Pollock often talked of “being in the painting”. He refused to acknowledge the gulf between his painting and himself, and it is perfectly seen in this piece of art.

There was a time when Pollock was working only in black. It was a period of devotion to black. This painting came after that period, and the artist used the color black in vertical blocks along the painting bright light.

This famous work of abstract expressionism was one of the most famous last works by Pollock. It was done during the height of his career. It depicts several disembodied eyes hidden within the swirling and colored fragments.

Arguably one of his most famous works. There are many theories on the meaning of the painting. Some believe it is “deep and profound void or hole”, while others that it is a vicious cut or a dying man. Therefore, the name The Deep. In this painting, he uses a combination of black and white, only to break it down with just small touches of yellow.