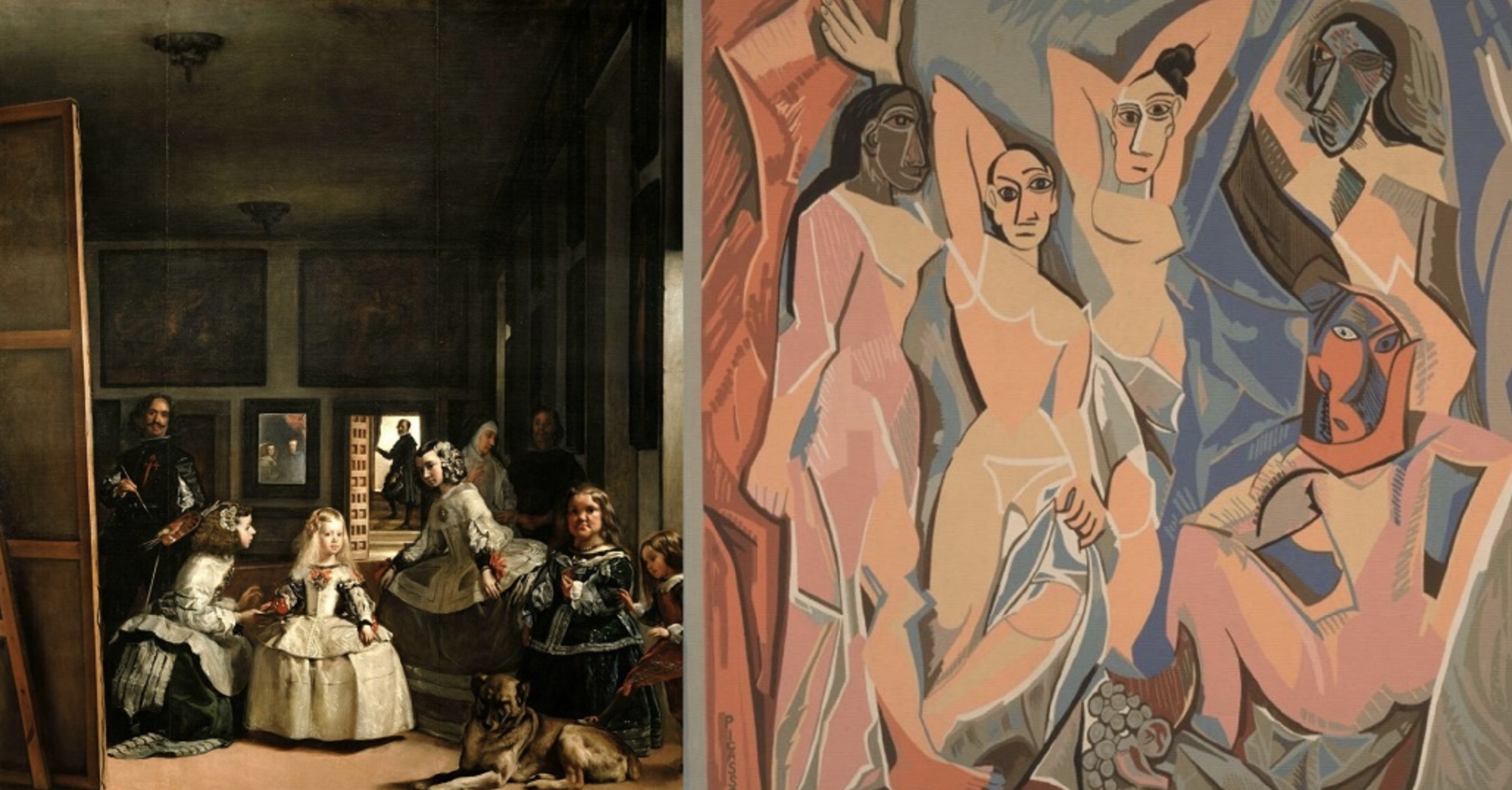 Spain has given the world names like Picasso, Dali, and Goya. When you take a look at lists of most famous artists, one of these would certainly make it. And these three gave us a lot of amazing paintings over the years.

We can go over history and find an amazing piece in almost any period. For example, we have the baroque brush strokes of Diego Velazquez. Or we can go to the religious relics of El Greco. What about Pablo Picasso and his Cubism? And we can finish with the surrealist sphere that Salvador Dali created. Spanish art falls among the best in the world.

Here are our top 10 picks for the most famous Spanish paintings.

Translated to Ladies in Waiting, the 1656 painting by Diego Velazquez has a complex and enigmatic composition that raises more questions than answers. Questions about reality and illusion, and creates an uncertain relationship between the figures in the painting and the viewer. Many western critics and art historians have tried to analyze it.

Some believe the painting depicts the main chamber in the Royal Alcazar of Madrid during the reign of King Philip IV. There are a couple of figures on the painting, some identifiable from the Spanish court.

The beauty of the painting is that some figures on the painting look out toward the viewer, while others interact among themselves.

Baroque critics believe the painting represents the theology of painting. Others describe it as the true philosophy of the art.

But all historians agree with one thing. The elusiveness of the painting suggests that art and life are an illusion.

Some historians nowadays believe Picasso got lucky with Guernica. He was at the right time, at the right place. But many others were, and nobody painted the event as masterfully as Picasso.

The 1937 oil painting is one of the most moving and powerful anti-war paintings in history. With its grey, black, and white colors, the painting portrays the suffering of people and animals wrought by violence and chaos.

To understand the painting, you have to know your history. In 1937, Nazi Germany bombed the country town of Guernica at the request of Spanish Nationalists. They tested their new weapons, and the bombing brought horror to the town.

Picasso painted the horror from his home in Paris and helped bring worldwide attention to the Spanish Civil War. He used matte house paint specifically formulated with the least possible gloss.

Fun fact: he rarely allowed strangers into his studio during his life. But for this particular painting, he admitted influential visitors to observe his progress. He worked on the painting for 35 days.

This is another history painting. On the May 3, 1808, France attacked Spain during the Peninsular War. Francisco Goya painted the event and presented it with an emotional force.

It is another painting that serves as an archetypal image of the horrors of war. It draws on many sources from both high and popular art, yet, it marks a clear break from convention.

Unlike other traditional depictions of war, Third of May has no distinct precedent. Many historians consider it one of the first paintings of the modern era. It is revolutionary in every sense of the world, including style, subject, and intention.

This painting inspired several other painters for their paintings, including Picasso and Eduoard Manet. Picasso used this painting as an inspiration for his Guernica.

The Burial of the Count of Orgaz

This painting by El Greco illustrates a popular local legend of his time. That is where his talent kicks in. The famous Spanish painter managed to lift a local legend into a mainstream legend thanks to his painting skills.

The exceptionally large painting has two sections, heavenly above and terrestrial below. But it gives little impression of duality since they work together perfectly.

Some historians believe the composition of the painting got inspired by Byzantine iconography of the Dormition of the Mother of God. But they all agree that the painting influenced contemporary Spanish funerary art.

Simply put, this painting started the art movement Cubism. It served as the beginning of Cubism. Early in 1907, Picasso started a strange large painting depicting women, fruit, and drapery. Depicting five nude female prostitutes in a brothel, he depicted each figure in a disconcerting confrontational manner and none is feminine.

For example, the figure on the left looks like an Egyptian girl dressed in an Asian style. Picasso depicted the two adjacent figures in the Iberian style of his native Spain. And then the two on the right with African mask-like features.

The painting had revolutionary and controversial all written on it. It led to widespread anger and disagreement, even among his associates and friends. And then at the time of its first exhibition in 1916, the painting got deemed immoral.

The painting didn’t have an immediate impact. It stayed in his studio for many years. In the beginning, only his close friends got to see it.

In the early 1920s, the painting finally got its recognition and value.

Nude Maya is another painting by Francisco Goya. This one portrays a woman reclining on a bed of pillows. Historians believe Manuel de Godoy commissioned it for his private collection in a cabinet of nude paintings.

Fun fact: Goya made a pendant of the same woman, in the identical pose, but with clothes on. We know it La Maja Vestida (The Clothed Maja).

Critics praise it for the straightforward and unashamed gaze of the model towards the viewer. It is also one of the early Western paintings that depict a nude woman and her pubic hair without negative connotations. For example, images of prostitutes.

The painting carries many of the traditions of depictions of the nude in Spanish art. Yet, it marks a clear break in the model’s face, especially in the bold gaze.

Walk on the Beach

The 1909 oil on canvas painting by Joaquin Sorolla shows his wife and eldest daughter during a walk on the beach in Valencia. It is part of the collection of the Museo Sorolla in Madrid.

The painting makes the list because of the size. Painters didn’t use a large square canvas for a beach view. This painting is monumental in that way.

Both women lean forward slightly, making them appear as they move toward the right edge. Unlike the people, the sand surface got depicted in short strokes. This creates a seamless transition from the beach to the sea. The perspective of the viewer gets slightly raised. That way, they cannot see the horizon. Instead, the beach and the sea form a curtain-like background.

The Face of War

Painted by Salvador Dali, he made it during a brief period while living in California. He always found inspiration in trauma and the view of war. He painted this one between the end of the Spanish Civil War and the beginning of the Second World War.

It depicts a disembodied face hovering against a barren desert landscape. The face itself wears an expression of misery. And you can see that the mouth and eye sockets are identical faces.

And in the lower right corner, you can find a handprint that Dali left with his own hand.

The Temptation of St. Anthony

You can make a list of the top 10 Spanish paintings just with Dali paintings. But we chose only two of them. The second, The Temptation of St. Anthony, is a precursor to his classical period. Some art historians refer to it as Dali Renaissance.

The painting still contains surrealistic elements typical of his work. And it is the first of his pieces to exhibit his interest in heaven and Earth.

This painting also depicts a desert-like landscape, typical for Dali, and a low horizon line with high clouds and dark, warm tones in an azure sky. St. Anthony kneels in the bottom left corner holding a cross in his right hand. You can see a human skull by his right food.

The title itself provides clues to the meaning of the painting. But Dali also provides a lot of symbols, including the form of the elephant, the animal parade, a horse, and many more.

According to some analysts, he sits on one knee, holding a cross against the advancing parade of creatures. One of them, the rearing horse, represents the fountain of desire. The obelisk on the back of the elephant pays homage to Elephant and Obelisk. And in the clouds behind the elephants, you can see glimpses of El Escorial, representing the spiritual disorder.

Religion played a huge role in Spanish art. You can see the topic and motif in many Spanish paintings. We finish our list with the most notable piece by Francisco Zurbaran.

Noted for his portrayals of penitent or martyred monks and saints, he used his paintings to illustrate a difference in the way saints got depicted.

In this painting, he depicted Saint Serapion in a quasi-crucified pose, standing with each hand-bound by ropes and chain to a horizontal pole. The work also makes strong use of chiaroscuro, a Spanish painting technique.