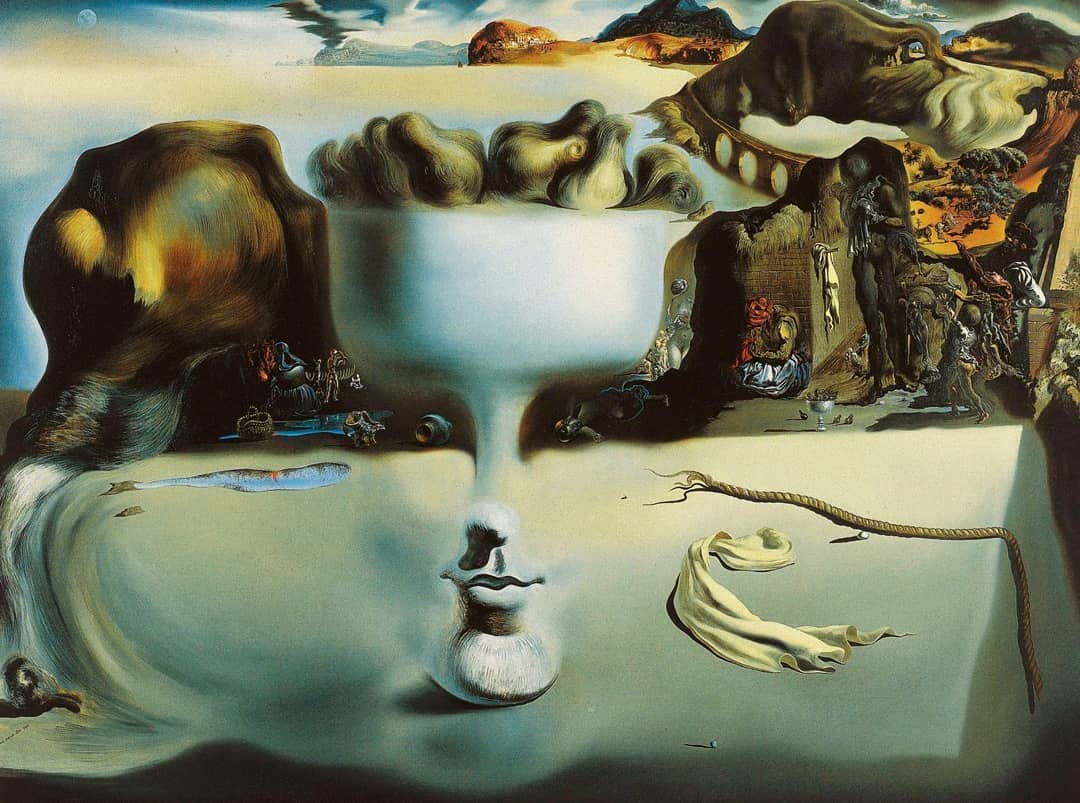 Salvador Dali was born in Figueres, Catalonia, Spain. He was a skilled draftsman, best known for the striking and bizarre images in his work. Rightfully so, Dali is considered the founder of surrealism. He is arguably the most famous surrealist.

Dali attended drawing school when he was little, and at age 14, he discovered modern painting on a summer vacation trip to Cadaques. The next year, his father organized an exhibition of his charcoal drawings in their family home. His first public exhibition was at the Municipal Theatre in Figueres in 1918, a site he would return for many years later on.

One of the most important moments in his life is the passing of his mother. She died of cancer when he was 16 years old, and her death was the greatest blow he had experienced in life.

In the 1920s, Dali went to Paris and began interacting with famous artists such as Picasso, Miro, and Magritte. They all had influence on Dali, and that started his first Surrealist phase. He was influenced by many styles, ranging from classic, to avant-garde. Some artists that influenced his work include Raphael, Bronzino, Vermeer, Velazquez, and Francisco de Zurbaran.

Dali used both classical and modernist techniques, sometimes in separate works, sometimes combined. His signature painting is The Persistence of Memory, showing melting clocks in a landscape setting. Many of his paintings contain melting elements.

Dali painted this picture when he was just six years old. It was at the beginning of his career, when he was under influence of the Impressionist movement. He draw the painting on a postcard measuring just 14x9cm.

Dali spent four months painting this piece of art. Bread has been featured heavily in his other works, but this one is particularly interesting. He said that bread was one of the oddest subjects of fetishism and obsession in his work. He painted the same piece in 1945, and one has to look at both pictures to study the history of the painting and the political context at the time.

While Dali did not officially join the Surrealist movement until 1929, influence of it can be seen in this picture. There are many highly ambiguous geometric and organic forms, all of which were inspired by Miro and Magritte. The surrealist movement draws inspiration from Sigmund Freud, the father of psychoanalysis.

The soft head and virtually non-existent body has been featured in many of Dali’s paintings around the time he joined the Surrealists in 1929. But in 1937, he recreated the large soft head in an individual picture called the Sleep. It was an idea to focus on the subconscious mind.

Salvador painted this piece of art as a tribute to his wife, Gala. She was not only his wife, but also his muse. The picture shows Gala pieced together through a series of spheres arranged in a continuous array.

When Dali’s mother died, his father remarried, with the sister of his wife. Dali was not mad, as he loved his aunt. He painted the Enigma of Desire to show himself embracing his father. Salvador said that the work of art was one of his ten most important paintings.

Considered one of his early masterpieces, the Great Masturbator is a kind of psychic snapshot of where he was at the time. He was just 25 years old when he painted. This painting is one of the few that remained in Dali’s personal collection until his death.

This is a masterpiece he painted during his later period. He said that he tried to represent the notion of a finite universe with the picture, not an infinite one. According to Dali, the idea is that “all the cosmos and all the universe converge in one point, which, in the present case, is the tuna fishing”.

Dali painted this masterpiece while he was living in America with his wife. It was one of the best post-second World War paintings, when more and more painters included nude pictures. It is worth noting that this is the first time an elephant appears in one of his paintings. Elephants are huge element in his paintings, representing a distortion of space.

Dali worked for several months on this picture, which represents the horrors of the Spanish Civil War. It shows an aggressive monster destroying itself, tearing violently at its own limbs.

Painted in 1946, the picture is a precursor to his work commonly known as the classical period. Some even call it the Dali Renaissance.

He painted this masterpiece in one of his most prolific years, the 1940. At the time, he already lived through a civil war and a world war. The picture shows several elements for Old War vs New War, Peace, and Hope.

Dali detested war, and more than anything, he hated the destruction it brings. World War II ended with two nuclear explosions. Not to mention, the United States of America conducted nuclear tests all the time. Dali Wanted to paint a picture, showing head, tree, and nuclear mushroom. The mushroom, as you can expect, represents destruction, while the head represent humanity and the tree represents nature.

This picture is part of his paranoiac-critical period. He loved himself, and the picture shows Narcissus. According to Greek mythology, he fell in love with his own reflection in a pool.

This is one of the more enigmatic pictures by Dali. Dominated by a depiction of brown-skinned pears, the painting contains so many elements, one would need full day to explain them all.

This is one of the more controversial pieces by Dali. It is also one of his best known paintings from the later period. It shows the Crucifixion of Jesus, as it depicts Christ on the polyhedron net of a tesseract.

This is the Second Madonna. The Madonna of Port Lligat is a pair of paintings, with the first one created in 1949. Dali submitted it to Pope Pius XII for approval, and then created the second one in 1950.

This painting perfectly shows his surrealism. He tried to release the creative potential of the unconscious through strange and dream-like imagery.

Some people believe that Leda shows Gala’s role as a substitute for Dali’s mother. This painting is a frontal portrait of Dali’s wife, Gala. She is seated on a pedestal, with a swan suspended behind her and to the left. There are several mythological references in the painting.

Melting clocks or melting watches are some of the most common objects in Dali’s paintings. It is also the main object in the Persistence of memory. In this painting, we see a big depiction of the melting clock. Per Dali’s explanation, the clocks are losing their power in the dream world, and they are anything but persistent.

Dali painted the Burning Giraffe before his exile to the United States. It is an exceptional surrealist painting explaining the Spanish Civil War.

23. Geopoliticus Child Watching The Birth Of The New Man 1943

It is widely accepted as one of the most recognizable paintings by Dali. The painting is a large egg-shaped globe of the world out of which a man is struggling to hatch.

Dali already painted the crucifixion of Jesus Christ. In this painting, he again depicts Jesus Christ on the cross, this time with a darkened sky floating over a body of water.

This painting shows one of his famous double images. As mentioned previously, he was a huge fan of using elephants in his work. This painting is quite the challenge to normal eyes, since there are many hidden features of illusion inside.

The irony in this painting is just amazing. The caricature of Dali’s face, complete with his recognizable mustache, appears on a plinth, like a trophy.

The most recognizable painting by Dali, it was actually done in his early period. This was the painting that showed Dali as a master in surrealism. He uses a lot of sarcasm in the painting, using the melting clocks to show that they are anything but persistent.