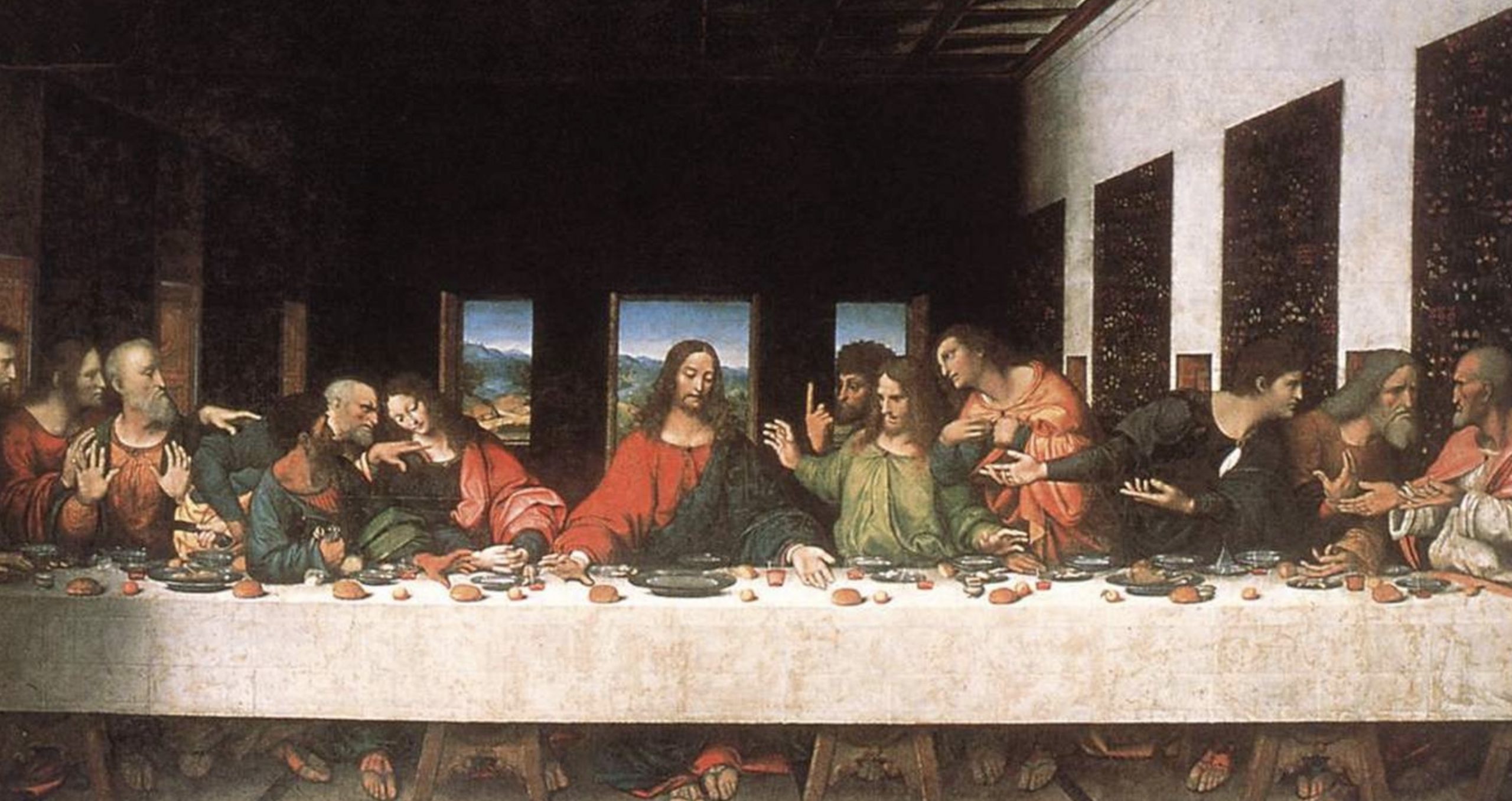 During the Renaissance, Italy served as the primary center of artistic development in the west. The period between the Middle Ages and the Modern Era stretched from the 14th to the 17th century. During this period, some of the most famous Italian artists devoted their life to creating masterpieces. Some of the famous Italian paintings include Birth of Venus, Primavera, and many more.

Leonardo da Vinci, Michelangelo, Raphael, all expressed their creative spirit during this period. Together, they produced some of the most famous artworks in the world. Let’s check some of them.

The Birth of Venus

Made by Sandro Botticelli, the Birth of Venus depicts the goddess Venus arriving at the shore after her birth. She emerged from the sea fully-grown. It is one of the most famous and important paintings of Italian culture. Nowadays, it sits in the Uffizi Gallery in Florence, Italy.

Many critics discuss this art as a pairing with Primavera, another mythological painting by Botticelli. These two represent icons of the Italian Renaissance. The Birth of Venus carries more weight and popularity among critics and historians.

There are many theories about the theme of the painting. Some see it in the context of wedding celebrations, others as the influence of Renaissance Neo-Platonism. But many agree you do not need a complex analysis to decode its meaning. Primavera, on the other hand, carries a bit more mystery.

The meaning of The Birth is straightforward, as Botticelli took it directly from Greek mythology. The style is what critics want to discuss. The pose of Venus is classical, but he also borrows from the Greco-Roman sculptures. There are some elements of Gothic art as well.

Venus’s body follows the curve of a Gothic ivory. The style differences are not physiological, but rhythmic and structural.

Did you know that Mona Lisa got famous because of a robbery? Before a thief stole the painting, Mona Lisa had little to no fame. But the half-length portrait painting by Leonardo da Vinci rose to the status of cult and iconic painting. Nowadays, critics consider it an archetypal masterpiece of the Italian Renaissance.

Nobody knows for sure the identity of the woman in the picture. Many consider it Lisa Gherardini, the wife of Francesco del Giocondo.

Even Salvador Dali, famous for his surrealist work, painted a Self-portrait as Mona Lisa in 1954. Andy Warhol has created a couple of prints of multiple Mona Lisa images.

At the central decoration, Michelangelo painted nine scenes from the Book of Genesis. The Creation of Adam has an iconic standing compared to Mona Lisa by Leonardo da Vinci.

Unlike other depictions of the creation scene, Da Vinci went with a more mobile version. Previous depictions showed static, enthroned image. For example, take a look at medieval Byzantine-style mosaics.

According to some statistics, more than 10,000 visitors go through the Vatican museum per day. The ceiling of the Sistine Chapel serves as the biggest tourist attraction.

Italian paintings feature a lot of biblical and religious motifs. The Last Supper by Leonardo da Vinci falls into that category. This iconic painting serves as a platform for theories and conspiracies for many years.

The painting depicts the scene of the Last Supper of Jesus with his apostles, as told in the Gospel of John.

Unlike other depictions of the event, Da Vinci didn’t want to prominently show and point to Judas. Instead, he hides him lurking in the shadow.

The other controversy regarding the painting came after the publication of Dan Brown’s Da Vinci’s Code. In the book, Brown discusses the possibility of hidden meanings in the painting. One of them is the theory that Leonardo painted a woman in The Last Supper. But that theory didn’t get many supporters.

According to the theory, the person right to Jesus (left from a viewer’s perspective), is Mary Magdalene. The theory also suggests that there was a letter glaring in the center of the painting, M, standing for Matrimonio or Mary Magdalene.

Many big-name artists have tried to replicate the Last Supper. For example, Salvador Dali painted The Sacrament of Last Supper. He portrayed Jesus as blond and clean-shaven. Marisol Escobar, a sculptor, rendered The Last Supper as a life-sized and three-dimensional sculptural assemblage using wood, plaster, and aluminum.

Andy Warhol produced a series of paintings, and he exhibited them in Milan.

What some historians agree is that the painting contains possible numerical references, including to the number three. For example, the Apostles sit in groups of three. There are three windows behind Jesus, and his shape resembles a triangle.

The School of Athens

Raphael painted this fresco between 1509 and 1511 as part of a commission to decorate the rooms in the Apostolic Palace in the Vatican.

The School of Athens represents philosophy. He finished this painting after La Disputa (theology) and Parnassus (literature). The painting has an incredibly accurate perspective projection. Raphael learned this trick from Leonardo da Vinci.

The oil painting by Raphael initially graced the church of San Sisto, Piacenza. It is one of the last Madonnas he painted. Some critics, like Giorgio Vasari, call it a “truly rare and extraordinary work”.

Pigment analysis reveals the usual pigments of the renaissance period.

The painting had an interesting travel experience and adventure. During World War II, it got lost, then went to Moscow, Russia, and then back to Germany.

Now, it sits in the Gemäldegalerie Alte Meister, where the guidebook describes it as “the most famous showpiece”.

The Calling of St. Matthew

Caravaggio captured the moment at which Jesus Christ inspires Matthew to follow him. He completed it between 1599 and 1600 for the Contarelli Chapel in the church of the French congregation, San Luigi dei Francesi in Rome. It remains there to this day. It hangs alongside two other paintings of Matthew.

The painting depicts the story from the Gospel of Matthew, saying “Jesus saw a man named Matthew at his seat in the custom-house, and said to him, Follow Me. And Matthew rose and followed him”.

There is a debate regarding the identity of the man in the picture as Saint Matthews. One interpretation points at the bearded man. He points at himself as if to ask “me”. Considering the other two works in the series, The Inspiration of Saint Matthew and The Martyrdom of Saint Matthew, the theory holds ground.

But another interpretation proposes that the bearded man points at the young man at the end of the table.

Arguably the most famous and iconic painting by Raphael, the Italian High Renaissance master. It is his last painting. Cardinal Giulio de Medici commissioned the painting for the Narbonne Cathedral in France.

Raphael worked on the painting until his death in 1520. It exemplifies his development as an artist and the culmination of his career. Unlike other depictions of the Transfiguration of Jesus in Christian art, Raphael combines the subject with the net episode from the Gospels (that is the healing of a possessed boy) in the lower part of the painting.

The painting stands as an allegory of the transformative nature of representation. From the 16th to the 20th century, many critics considered it the most famous oil painting in the world. Between 1525 and 1935, more than 223 written sources describe, analyze, or praise the painting.

There are a couple of interpretations of the iconography of the picture. Some see it as a reference to the delivery of the city from the repeated assaults of the Saracens. But on the simplest level, it is a depiction of dichotomy, the redemptive power of Christ.

There are a couple of theories surrounding this painting. Some attribute it to the Italian painter Giorgione. However, other theories suggest Titian completed it after the death of Giorgione in 1510.

These paintings started the trend of female nudes in a landscape, accompanied in some cases by clothes males.

This painting influences many images following it. For example, other nudes like Pardo Venus, Venus of Urbino, Venus by Velazquez, La Maja Desnuda by Goya, Olympia by Manet and many more.

We started the list with a piece by Botticelli, and we will finish it that way. His Birth of Venus and Primavera influenced countless paintings that followed.

This large panel painting in tempera paint depicts a group of figures from classical mythology in a garden. But there is no story that brings them together.

Nowadays, we can classify it as “one of the most written about and controversial paintings in the world”. Critics agree that the painting serves as an allegory on the lush growth of Spring.

Another interpretation claims the painting represents an elaborate mythological allegory of the burgeoning fertility of the world.