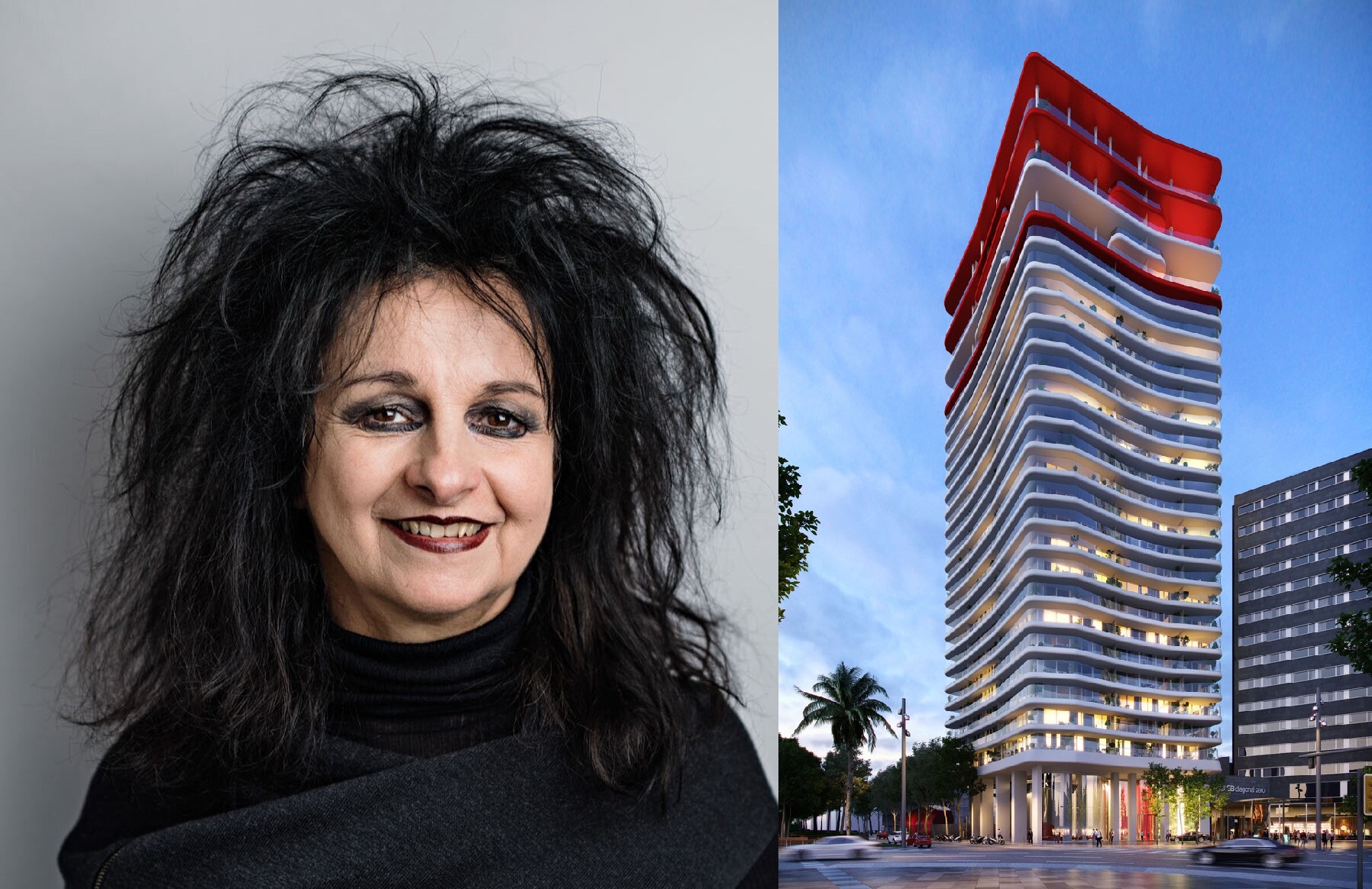 The world of architecture and architects is mostly a male-dominated field, but women are carving their way into their ranks, creating contemporary architectural masterpieces along the way. French architect Odile Decq is among those renowned women, with many projects and rewards in her wake and in her future. Originally an art history student in Rennes, France, Odile changed majors to architecture after realizing how much women-architects were being undermined and underrated at the time.

In the 1950s, during her studies, women occupied only 1% of the world of architects, which rose to a shocking 4% in the 1980s and 1990s. Up until the reforms in the field of architecture of 1968, women architects were viewed and valued more like today’s interior designers than actual architects. The first time that the Pritzker Architecture Prize was awarded to a woman was in 2004 to Zaha Hadid. Since then, women architects are reaching milestones that seemed impossible in the past, and Odile is in the front lines of this battle for equality.

Odile Decq, often called the “punk rock architect” or “rock and roll architect”, since the beginning of her career to this day has remained true to the goth style, in both her project and herself, despite the overwhelming criticism she received because of it. In pursuit of her passion, she faced many obstacles and nonacceptances.

After obtaining a diploma in architecture from the Ecole d’Architecture de Paris-La Villette, and receiving a bachelor’s degree in urbanism and planning from the Institut d’Etudes Politiques de Paris, she opened her own practice in 1979, which she ran alone until her husband joined in 1985 forming the ODBC Architects, (Odile Decq Benoit Cornette Architectes-Urbanistes).

The now 67-year old, Laval-born star of contemporary architecture is often called a rebel and a radical. Even so, she has created not only eye-catching structures but also fertile grounds for many future architects to come. An architect, urban planner, and academic, Odile Decq is also a businesswoman and educator, founding a company for architecture, design, and art “Studio Odile Decq” and The International School of Architecture in Paris, the “Confluence Institute”.

It would be hard to forget Odile Decq once you see her. Her presence and appearance are unique and shocking to many. Throughout the years, she has remained true to her style yet brought upon many changes in contemporary architecture. At her inclusive school “Confluence Institute”, she hopes to find ways for future generations to leave behind traditional methods of practice and research in architecture, opening the door for the emergence of new architectural styles and methods.

Odile has a multidisciplinary approach to her design, combining urban planning, architecture, design, and art. Spacial experimentation is her distinct feature, developing the concept of “hyper tension”, focusing on the dynamic opening of spaces.

The open areas present a sense of movement, which gives tension and complexity to the perception of space. Her style may be rooted in high-tech designs, but she loves to combine that and experiment with metal and glass, her materials of choice. Sharp edges are not something you’d expect in Odile’s creations, rather curves and twists that flow with the space inside and outside of the building.

Over the years, Odile Decq’s resume has become filled with awards and international recognition. Since creating a name for herself and gaining recognition and renown for her first major project La Banque Populaire de l’Ouest (BPO), she has been the recipient of many awards such as The Golden Lion of Architecture in 1996, Jane Drew Prize in 2016, Architizer’s Lifetime Achievement Award in 2017, while in 2018 alone she received an Honorary Fellowship from the Royal Architectural Institute of Canada, the ECC Architecture Award and Honorary Fellowship from The Royal Institute of the Architects of Ireland.

While many of Odile Decq’s projects are acknowledged, selected, and await their realization, her finished works are unfortunately few in number. Nevertheless, she continues tirelessly with her goal to achieve gender equality in the architectural profession, remaining a prominent figure in both the field of architecture and women’s rights, rocking her signature goth style all the way.

As mentioned before, this is Odile Decq’s first major project and one that put her on the map. Completed in 1990, it incorporated quite a few design and construction innovations, using a steel frame with modular industrial components, suspended glass, transparent facade, it all reflected the technology, precision, and innovation undertaken by the BPO company. Odile Decq won 12 awards for this project.  In 2015, however, it faced the danger of being demolished around 2015

When the French events management company GL wanted to create a dynamic and energetic office space for their headquarters, they were right to turn to Odile. Double-crossing beams are holding up the fourth floor, with an 86 degree shift at the two primary volumes of the building, where the large internal atrium creates open and free movement. Subdivisions of the building were designed with glass walls to keep the feeling of large open-plan spaces, while the bright red color that is Odile’s signature color, matched well with the company’s logo.

The site of some of the most important Chinese archeological finds, Nanjing Tangshan Geopark is a sprawling tourist parkland. Considering the significance of the location, it is a great honor for a foreigner to be allowed to design and construct a structure on such a site. The honor for designing the museum dedicated to geology and anthropology went to Odile Decq, which delivered an exceptional design, with the form of the building wrapping along the lines of the natural slope, giving the sense as the structure belong there as if it grew from the ground

Building anything on a slope can be difficult, but the view you get to enjoy from that point s worth the trouble. The Saint Ange Residence stands on the Tour Saint-Ange’s park overlooking the Grenoble’s valley. It is like a three-level tower, twisting at different sides to get the most view of its surroundings. The natural design of the interior clashes with the concrete-like exterior, making the residence stand at the slope like a majestic black monolith.

The Bubble Palace was Hungarian-born architect Antti Lovag’s creation in 1971. The design came about from the terrain and the weather environment where this was built. Aside from the unique appearance, its construction was done unusually as well. Instead of constructing a frame and determining the room within, Lovag designed the arrangement of the room first, then build the rest around it. When the renovation was in order, Decq collaborated with some of the original builders to stay true to Lovag’s vision, adding jer own touches to the regions of the house, utilizing vibrant colors in various locations. The renovation took 5 years and the Bubble Palace was reopened to the public in 2015.

Odile had the honor to design the first of the contemporary museums in France. It is a perfect example of her architectural philosophy about space. The facade is simple compared to the outside art installations, yet hiding an astonishing complex interior, guiding the visitor along with the void tough through the height of the building, while clearly defining different spaces and guiding the visitor on a trip of changing perception from the basement to the library at the top of the building. The most unbelievable thing though would be that this contemporary functional art was done on a small, limited budget.

Le Cargo is another renovation project, turning the existing office building into something pleasing and extraordinary. The seven-level expansion is organized around a central patio, with a small half-open, half-closed public area at the entryway connected to the boulevard. Inside the black and white seen throughout the structure is softened by the gentle curves and bright red colors.

Many historical buildings get an upgrade in form of interior redesign or utilizing the space for something other than the original intention. The location of the restaurant at this iconic opera house used to be like a drop-off zone for opera-goers when they arrived in their horse-drawn carriages. The inspiration of the restaurant is the Phantom of the opera, so the 90 guests that can be fitted at this restaurant are surrounded by gentle undulating curves like they’re surrounded by the vail of the mysterious, unseen Phantom.

The Penrania residential area in Lille, France consists of five housing buildings and 20 houses. Odile’s design and use of the material in the construction saved months of the building process. The complex itself is quite contemporary, opening onto a landscaped area on both sides, while the volumes of the apartments are designed to be superimposed to one another. They are low-consumption buildings, with Emerit pannel used for outdoor thermal insulation.

Torre Antares is Odile Decq’s latest project and first highrise building completed in 2020. This high-rise residential project near Barcelona’s shore rises 28 floors above the ground holding 89 luxury apartments. For residents and guests to get an unrestricted view of the city and the Mediterranean Sea, the interior design was done in fluid organic shapes, accompanied by a grand entry, a triple-height lobby with a private garden at the end of a curving green wall. Aside from the extraordinary luxury, the amazing part is that this type of aesthetic and functionality was achieved thanks to the great flexibility of the plasterboard.