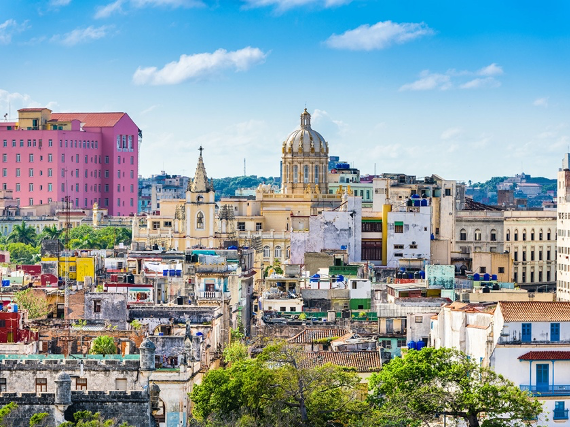 In the 20th century, Civil Architecture, Art Nouveau, and Art Deco styles were embedded into the Cuban buildings. With the revolution and post-revolution Cuban architecture, all of the cities got their mark from these periods. The city of Havana had the highest impact during this time.

Nowadays, Cuba is known for its diverse and eclectic architecture. And tourists from around the world love the Cuban architecture and the colorful buildings that once were a symbol of revolution. And we can see a lot of contemporary architecture with a glimpse of the modern world and futuristic approaches.

History of Architecture in Cuba

In the early period of the 15th century, Cuba was inhabited by Arawak and Ciboney Indians who have migrated around the Caribbean lands. The architecture in this period was based on their lifestyle and rudimentary culture. Since these indigenous people were living from natural sources, most of their houses and huts were made out of leaves and palm trees. The use of palm leaves was replaced with a more durable and permanent material introduced by the Spanish colonizers.

Military architecture is a symbol of the Colonial period, characterized by resilience. This type of style is defined as complex due to its main purpose to protect the area of unwanted attacks and any type of military action. Battista Antonelli was the first Italian engineer who introduced this Renaissance style to Cuba and these structures were also recognized by UNESCO. The Havana fortress is one example of Military architecture that has French design incorporated as a sign of an alliance between the French and Spanish people that had a major impact during the colonial period in Cuba.

Baroque architecture took place in the middle of the 18th century, 50 years after this style was introduced in Italy. The traditional baroque buildings have a few main characteristics, a stone facade with theatrical effects, towers, usually two, metal bar windows that enable improved air circulation which was needed for the Cuban geolocation, grand exteriors known as “portales” that protect from rain and sun. Baroque cathedrals are one of the most famous ones and were designed in the Spanish Baroque style.

In the 19th century, Cuban architecture fell under the influence of the French immigrants. The city of Cienfuegos was one of the cities that became the most impacted by these trends and is considered one of the most neoclassical cities in the country. It was founded in 1819, by French immigrants and features pastel coloring and elegant facades as its main characteristics.

The capital, Havana, had its influence in Neoclassicism, with its wonderful neoclassical buildings. The colorful and symmetrical features of the buildings make this city recognizable around the world. Many homes around the old town of Havana followed the urban design principles and implemented some neoclassical styles.

At the beginning of the 20th century, Cuba started implementing a new and unique style, called Art Nouveau and Art Deco. In an attempt to keep the pace of the diverse styles abroad, Cuba immersed the new, ornamental style of architecture that was popular in Europe at the time. The buildings from this period have marble and red granite facades and can be easily recognizable.

After the Cuban independence, in 1902, the country adopted civil works. Civil Architecture was characterized by Renaissance facades. In this period, the development of hotel architecture increased and many hotels were built. Some of the most famous ones are Habana Hilton and Havana Riviera Hotel.

Following the Cuban revolution, architectural development was slowed down due to the lack of resources and materials for construction, reconstruction, and new projects. One of the greatest projects post-revolution is the National Arts School building in Havana. The design of the building is a reflection of idealistic optimism and utopian socialism, embedded in Cuba.

The 21st century begins with the contemporary style of building and structuring the buildings. While contemporary architecture receives less coverage in Cuba, many people consider the new era of construction lacks funding and is not as important as the old styles. However, this style in Cuba still exists and exhibits concrete floors, high ceilings, and open floor plans as its key features. The Gran Hotel Manzana is one example of contemporary architecture in Havana.

There have been few notable debates about the future of Cuban architecture. A lot of architects argue that Civil architecture is outdated and is no longer serving its citizens. Old town Havana has a lot of buildings that need restoration are abandoned or are poorly maintained. Due to the lack of further funding, the architectural projects in the future are limited and there’s not much that can be done.

Not long after Cristopher Columbus visited Cuba in 1492, the country got its Spanish label. Today, Cuba is an independent republic and has landmarks that make the country worldwide recognizable. Here are some of the most famous, historical sites.

The Che Guevara Mausoleum is one of the most famous landmarks in Cuba. It’s located on a hill and contains the remains of guerilla fighters besides those of Che Guevara. It was constructed between 1982 and 1988 and it’s part of the pos-revolution period with the stone facade and the typical style of monochrome accents.

Finca Vigia is translated to “lookout house”. It was the home of Ernest Hemingway and was built in 1886. The building dates back to the colonial period, emphasizing its Baroque style.

Cruz De La Parra was built by Cristopher Columbus in Baracoa when he landed in the country in 1492. It translates as the “Sacred Cross of Parra” and it is believed that one of the 29 crosses, Cruz De La Parra is the only one that survived, out of the rest where he landed.

Callejon de Hamel is a narrow alleyway in Havana that might not seem like a landmark, but it’s popular due to the artwork. It’s filled with bright colors and sculptures from artistic styles in cubism and surrealism.

Cristo De La Habana is a colossal statue that was rediscovered in the 1990s. The statue was built in respect of Fulgencio Batista and was carved from marble in Italy. Before the inauguration, it was blessed by the Pope himself.

Morro Castle is known as the “Castle of The Three Magicians”. It was built from 1589 to 1630 in the old town of Havana and its main purpose was a line defense against colonists and pirates. The unusual structure and shape feature a lighthouse. It has proven to be a strong landmark, however, it was captured in 1762 by the British forces.

El Capitolio was built in 1920 and is the most photographed landmark in Havana. Over the years, this building held the record as the tallest structure in Havana and was designed by the same architect who landscaped the Eiffel Tower surroundings in Paris.

Casa De Diego Velazquez was the home of the first governor of Cuba. It’s the oldest building from the colonial era that was designed in Hispanic-Moorish style. It features geometric patterns, balconies, and tilework.

The Cathedral of Havana was built between 1748 and 1777 and was originally in commemoration of a Jesuit church on the same site. It was constructed from coral stone from marine creatures’ fossils.

Castillo De La Real Fuerza is one of the oldest buildings constructed on the site of a fortress. It was Havana’s first point of defense, built in the shape of a four-leaf clover.

Plaza Vieja is the old square of the city. And what’s a better place to enjoy the historical part of Cuba, than in this place? It’s full of colorful buildings with all of the architecture styles mentioned before. However, the major attractions are Plaza del Mercado and the Carrara marble fountain.

Valle de Los Ingenios is also known as the Valley of the Sugar Mills. The three interconnected valleys were significant in the urban period in Cuba, as well as the neighboring Trinidad. The Manaca Iznada Estate is currently a restaurant and a popular tourist site.

The Church of the Holy Spirit is one of the most notable landmarks in Havana. It sits on a plinth of 18 cm that can be seen along with Acosta and Calles Cuba. This is the oldest church dating from 1638 that features the Baroque style of architecture.

The San Pedro Castle is a fortress on the coast of Santiago de Cuba. It was designed by the Italian architect Giovanni Antonelli in a Renaissance style. It was built with cliffs on a promontory. Currently, it’s a UNESCO World Heritage site and it’s one of the most famous landmarks.