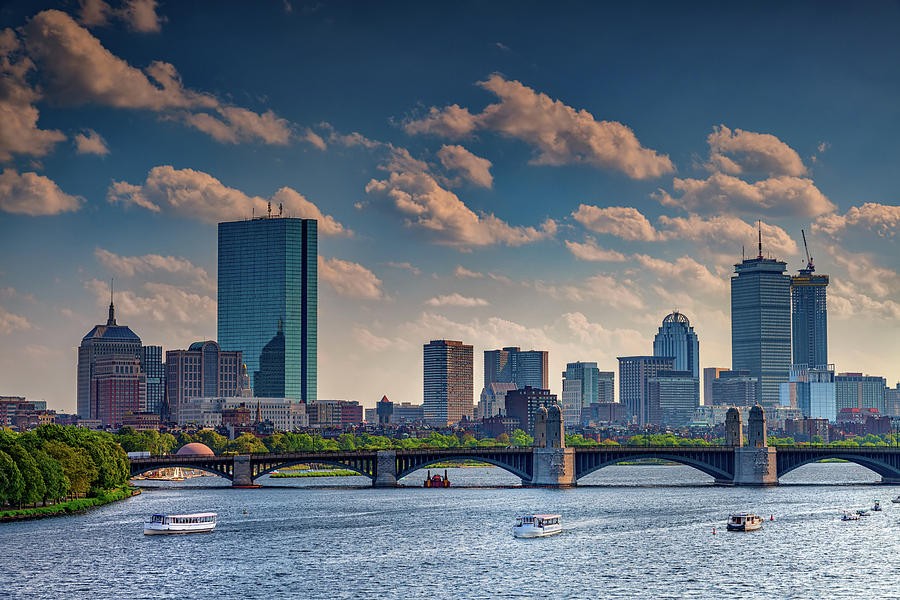 The architecture of Boston is a robust combination of the old and new architecture. The city is one of the best examples of how old and modern can function in harmony. Boston is one of the oldest cities in North America. Boston, Massachusetts, and its surrounding area have accumulated buildings and structures dating from the 17th century. Today, we will take a look at that amazing Boston architecture.

The city evolved from a small port to a town and then to a large cosmopolitan center for industry, technology, and finance. Famous for its granite buildings dating back to the early days, Boston is a place where you can see the origins of Federal Architecture.

The architectural history of Boston dates back to colonial and post-revolutionary periods, through the 19th century, Civil War, expansion, and the 21st century.

Boston has a long history and serves as the de-facto capital of New England. As such, there is no shortage of housing styles in the city. Those range from old brownstones and row houses to modern apartment complexes and lofts. Simply put, you can find virtually any type of house style in Boston.

Famous for their classic brownstones, they date back to the original founding of the city. They are small buildings, usually four or five stories tall. You can notice them by the signature brown and red stone brick.

Built mostly in the 1800s, they are easy to recognize. You can see them far back from the street with old architectural details. One of the signature elements are the engraved wooden baseboards and the grand staircases.

Called row houses because developers at the time built various identical brownstone units adjacent to one another on the same street.

These houses make some of the most attractive neighborhoods in Boston, like the Back Bay, Roxbury, and Beacon Hill. The South End, on the other hand, is home to many Victorian-era brownstones.

These homes are iconic in the Boston area. They are mostly located in the Beacon Hill neighborhood, which is one of the most expensive and exclusive in Boston.

Defined by features like symmetrical facades and clapboard siding, these houses are often painted white. They have clapboard doors and shutters in black color. The charming houses have become a Boston landmark.

Completed in 1899, the oldest historical society in the US has a building in Boston. Founded in 1791, the Massachusetts Historical Society has a building modeled in the Colonial Revival Style. With a bow front exterior, Doric columns, and washed-out yellow color, the historical structure stands out in Boston.

The 60-story residential skyscraper is the fourth tallest Boston building. It is also the tallest building in Downtown Crossing. Construction began in 2013 and finished in 2016.

Previously known as John Hancock Tower or The Hancock, this one is a 62-story skyscraper in the Back Bay neighborhood.

Widely known for prominent structural flaws. One analysis concluded that the entire building could overturn under a certain wind load.

In 1977, the American Institute of Architects presented the firm with a National Honor Award for this commercial building. Since 1976, this building remains the tallest building in Boston and New England.

The street address is 200 Clarendon Street. Yet, occupants often use Hancock Place as a mailing address.

Colloquially known as The Pru, the Prudential building is an international-style skyscraper in Boston. It is part of the Prudential Center Complex, located behind the John Hancock Tower.

It contains 1,2 million of square feet commercial and retail space.

The skyscraper is the third tallest Boston building. But it is also the tallest residential building in New England.

Built along with a 26-story building, both projects were designed by collaborating architects. It contains a ballroom, meeting rooms, a gym with a spa, and a private dining service among other amenities.

The fifth tallest building in Boston, Massachusetts, it is located at Dewey Square. It was built for the Federal Reserve Bank of Boston to replace the 1922 building. The latter now houses the Langham Hotel Boston.

Designed by Hugh Stubbins of the Stubbins Associates, it was one of his favorite buildings. The design is quite different from other Reserve Banks, which resembled fortresses. Sometimes people call it the washboard building or the Venetian Blind building.

It consists of an office tower and a four-story wing. It has a glass front and an anodized aluminum exterior.

The First Church of Christ, Scientist

This building serves as the administrative headquarters and the mother church of The Church of Christ, Scientist. It is also known as the Christian Science church.

Found in the 19th century, Christian Science was founded by Mary Baker Eddy with her book Science and Health.

Also known as the New State House, this building is the state capitol and seat of government for the Commonwealth of Massachusetts. This building is a masterpiece of Federal Architecture. Architect Charles Bulfinch designed it. Many consider it one of his finest works.

The modern building was designated a National Historic Landmark for its architectural significance.

This one, for example, serves as the seat of the city government. It houses the office of the mayor of Boston and the Boston City Council.

It is a prominent example of Brutalist architecture, part of the modernist movement. Many people call it the world’s ugliest building. On the flip side, architects consider it one of the proudest achievements of American architecture.

The official name of this building is The Governor Michael S. Dukakis Transportation Center at South Station. In any case, it is the largest railroad station and intercity bus terminal in Greater Boston.

The historic station building was constructed in 1899 and replaced the downtown terminals of several railroads.

Often abbreviated as MFA Boston or MFA, the art museum is the 20th largest art museum in the world measured by public gallery area.

This skyscraper in McKinley Square was constructed in 1837. It is now tied with the Hub or Causeway Residential Tower. As of 2016, the building houses the Marriott Custom House Hotel.

The unfinished Brutalist structure by architect Paul Rudolph is one of the major buildings in the government center in downtown Boston.

Located on Columbia Point, the building is the official repository for original papers and correspondence of the Kennedy Administration. The library and museum are part of the Presidential Library System.

We cannot have a list of Boston architecture without one of the most famous and prestigious universities in the US and the world, Harvard. The medical school or HMS was founded in 1782, remaining one of the oldest medical schools in the United States.

Often, it is ranked first for research among medical schools in the US.