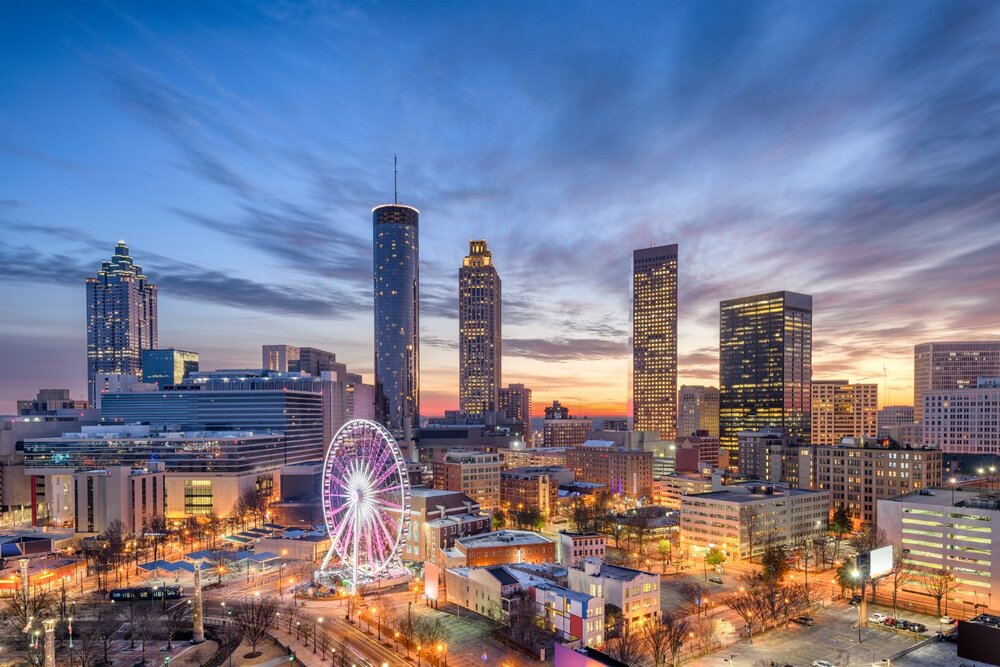 Architecture in Atlanta is marked by the influence of classical, modernist, post-modernist, and contemporary architectural style. The city was completely destroyed by fire in 1864. Because of that, there are no traces of its Antebellum past. What makes Atlanta so great is its success as a post-modern American city. You can see that reflected in Atlanta architecture.

Atlanta has often been one of the earliest, if not the first, city to showcase new architectural concepts. Today, we will take a look at the rich history of architecture in Atlanta and some of the notable buildings in the city.

History of architecture in Atlanta

Atlanta was a settlement that grew from a planned railroad terminus and into a railroad junction later on. The most important buildings in the city at the time included Union Station, Trout House, Atlanta Bank, and Washington Hall hotels.

Sadly, because of the great fire that happened in Atlanta, not a single antebellum building remains today. The only thing you can find from antebellum architecture is four houses outside the city limits and the Tullie Smith House.

As we said before, most of the city was burned during the Civil War and the fire that happened. This depleted the city of a large stock of its historic architecture.

But while Atlanta is in the south, the architecture has never been southern. Atlanta originated as a railroad town, not a patrician southern seaport.

Throughout the American Renaissance, the city saw the rise of impressive hotels, industrial architecture, and civic architecture.

During the Cold War Era, the city followed the global modernist trends. This is most notably seen on office towers and commercial buildings.

During this period, Atlanta native John Portman was the most notable architect.

In the latter half of the 1980s, Atlanta adopted postmodern design reintroducing classical elements to the cityscape. Some of the tallest skyscrapers in Atlanta were built during this period. For example, the Four Seasons Hotel Atlanta.

With the dawn of the 21st century, former industrial buildings were repurposed for residential land retail use.

The King & Queen Buildings might not technically be in Atlanta. But the twin towers are the metro’s most regal structures. The official name of the buildings is Concourse Corporate Center Buildings V and IV.

They are social landmarks, famous for their distinctive metal caps.

It is Buckhead’s tallest buildings and most artfully curvaceous. It is a distinctive building with a glass façade that stands out in the skyline.

Noted classicist Philip Trammel Shutze designed the Swan House. It was constructed for Edward Inman in 1928. Today it is a museum, part of the Atlanta History Center.

It is just one of many of Shutze’s residential, religious, and institutional contributions to the city of Atlanta.

Some call it the Castle of Peachtree. It was built in 1904 of stone mountain granite in the Romanesque Revival architectural style. It was originally a residence of Rhodes Furniture founder Amos Rhodes.

It was inspired by Amos and his wife Amanda and their travels through the German Rhineland in the 1890s. Today it is a house museum. Visitors can see a series of painted glass windows.

When you take a look at local libraries, this is one of the most avant-garde and interesting architectural buildings. Built in 1989, the library won the National American Institute of Architects Award for Excellence.

The landscape around the building has changed, but the library remains the same. Covered with gray tiles and framed by exposed, metallic beams, the building is famous for its sharp angles.

The modern architecture white building has sculptural elements that are unique. Designed by noted architects Richard Meier and Renzo Piano, the museum is a work of art.

Many know it as the Batman Building. The wing-like glass of the building faces rising high above the roof of the building. It looms over Midtown. Initially, the building was supposed to be one of three highrises to comprise the Atlanta Symphony Center.

The blue-domed restaurant spins so slowly, that visitors can enjoy a 360-degree view of the Atlanta skyline. Architecturally speaking, it is an unusual sight to behold both inside and out. It is another Portman creation in the city.

The restaurant resembles a friendly-looking flying saucer that landed atop the more Hyatt Regency.

The 1929 movie palace is famous as the Fabulous Fox. The place is a perfect example of people fighting for their own city. A campaign to save the building from the wrecking ball in the 1970s sparked the current preservation movement.

The building project opened in 2007 on 30 acres. Since then, it has been visited by more than 2 million people. It is the largest Hindu temple in North America. Some of the spectacular features include Italian marble, Turkish limestone, and towering spires with streaming flags.

It is hard to write about Atlanta architecture without mentioning the Atlanta Marriott Marquis. It remains the largest hotel in the city. Thanks to its aesthetic allure, the hotel has attracted many tourists, but also movie crews. Only a few hotels in the world have such sweeping and scenic rides up the elevators.

The office tower is the tallest office building in the Atlanta neighborhood. It is also the tallest building constructed in Atlanta in the 1990s. It offers a lot of office space. It also makes a pop-culture appearance as the headquarters of Westgroup Energy in the AMC period drama, Halt and Catch Fire.

For more than a decade, this building held the title of Atlanta’s tallest building. It was also the tallest hotel in the world for a while. It is a 73-story skyscraper designed by John Portman.

Cast in reflective glass, the cylindrical-shaped hotel has 5,600 windows. But the main attraction is the Sun Dial Restaurant and Bar located on the uppermost floor.

The luxury hotel in Downtown Atlanta offers the most meeting space in the Atlanta market. It also has the largest hotel ballroom in Georgia. Designed by Atlanta native John Portman, the hotel has a total of 1,260 rooms.

The 60 story skyscraper in downtown Atlanta is the 77th tallest building in the world and 25th in the US. When it was completed, the building was the 28th tallest in the world.

The building is also known as the IBM tower. The skyscraper in Midtown Atlanta is the third-tallest in Atlanta. Commissioned to serve as the headquarters for IBM, the tower is notable for creating what is now the Midtown commercial district.

It was heavily influenced by the Tribune Tower in Chicago. The exterior is clad in pink Spanish granite and culminates in a copper pyramidal top with a gold peak. There are also gothic elements in the design, below the copper top of the building.

Formerly known as BellSouth Center and Southern Bell Center, the 47-story skyscraper was completed in 1982. It serves as the regional headquarters of BellSouth Telecommunications, a company doing business as AT&T Southeast.