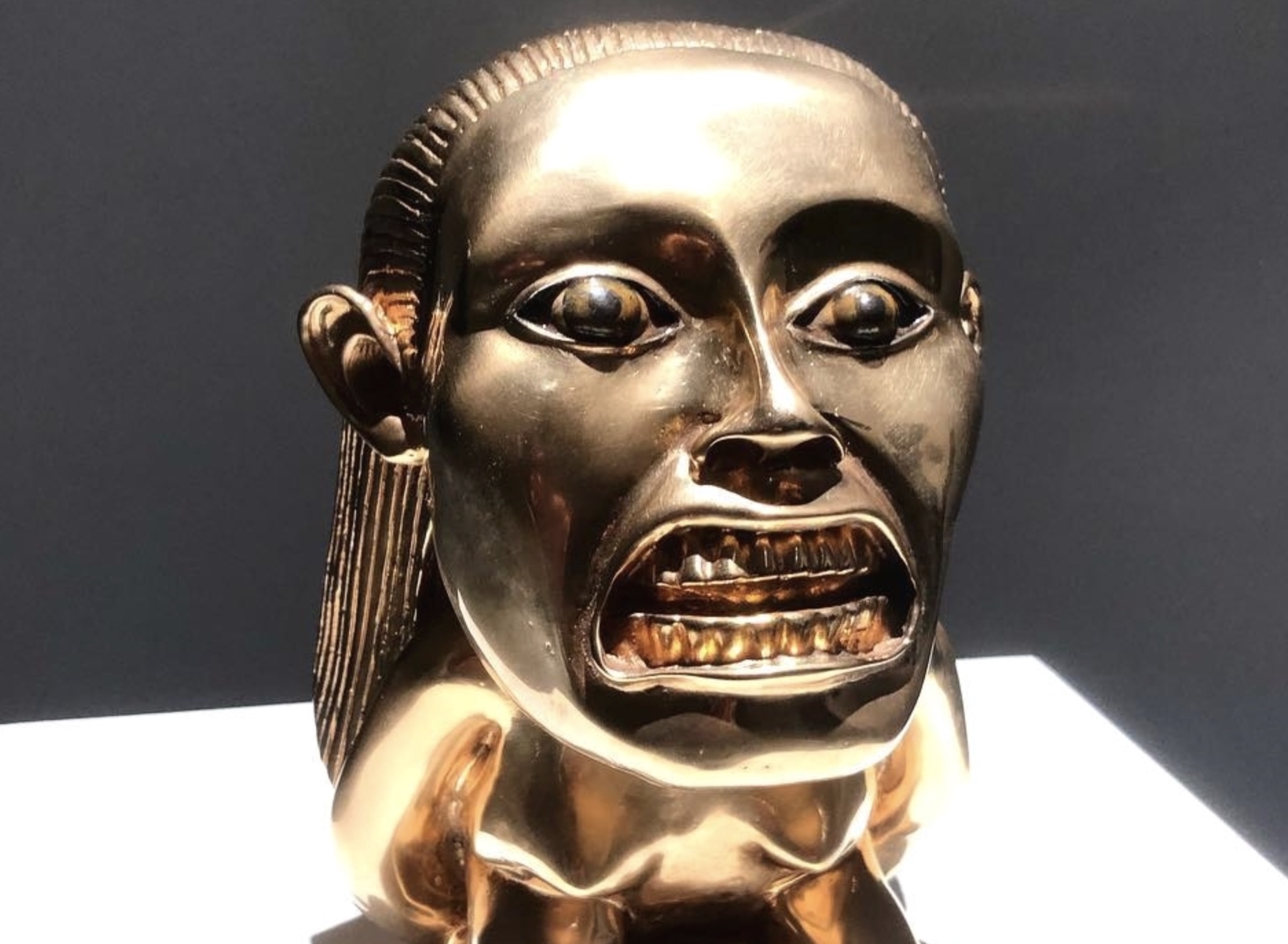 Alex Israel is a multimedia artist, writer, and even an eyewear designer from Los Angeles. His work includes large and colorful paintings of abstract gradients and Los Angeles skies.

He also does self-portraits, mostly painted on shaped fiberglass panels. His multimedia installations are constructed from movie-house props.

His work is included in the collections of many museums. He also has some web series, including As it Lays, in which he interviewed LA celebrities, 33 to be exact. The group included Oliver Stone, Perez Hilton, Jamie Lee Curtis, Rachel Zoe, Marilyn Manson, and more.

In 2010, he founded his eye wear brand, called Freeway Eyewear. It debuted with seven styles in the spring of 2010, drawing inspiration from California freeways. Models were named after freeways.

Religious topics and concepts are often part of art. And while they are rarely present in modern art, especially in pop art, urban art, and graffiti, Alex Israel uses the concept. Adam and Eve were the first humans to inhibit our Earth, and they are part of Israel’s exhibition.

Minerva is the Roman goddess of wisdom, trade, arts, and strategy in war. As a goddess of art, it is only logical for her to make way into an art exhibition. One of her domains was handicrafts.

Alex refers to these “paintings” as “flats”. That is a technical term used in the film and television industry to describe the backdrop for sets. And while they hang on the wall, they are not paintings. At least not in the eyes of the author.

Alex used the Flats series to evoke the experience of Hollywooding. That is a term used by the artist to describe the unique character of the city. In his words, Hollywood is more than a town, it is an attitude, a way of moving and being.

While most of the objects in the Flats series are in pink, romantic color, Alex also tried another color. The vivid orange symbolizes the dynamic and joyful lifestyle of Hollywood.

Flats were deliberately unclear. Alex wants to blur the distinction between commercial and fine art. Some experts criticize him for that, but he lives his own way.

Flats is one of his most successful exhibition. Each is a framing device for an on-screen action or for props acting as sculpture. Some say that Flats is actually a nostalgic take on the romantic Hollywood past and the American dream.

Flats recur again and again across his work. They are just phenomenal in a way they show so much emotions in a flat painting/backdrop of set.

The sky of Los Angeles is one of the most common topics and concepts in Alex Israel work. Depending on his mood, the sky is shown in different colors. And that metaphor is what makes his paintings genius. Look at the color, and try to imagine what the actor is feeling.

The more colorful a sky is, the more joyful, right? Well, nobody can tell for sure when looking at Alex’s paintings.

Self-portraits are another popular medium and concept in his art. He plays with colors, trying to show a different mood. If you have ever watched the Big Bang Theory, shirts worn by Sheldon Cooper symbolize the mood of the character. This is the same metaphor Alex is playing with.

There are many routes and highways in America. The Pan-American might be the most famous and popular one. It stretches across the entire American continent.

Breaking the fourth wall are we? Selfie within a self-portrait, now that is a whole new level of taking selfies.

Here Alex explores the iconography of his hometown, the Hollywood film industry, and the cult of celebrity. Desperado is one of the most famous Hollywood movies, and this scene is iconic.

How would Alex Israel look in a wet suit? You have the answer thanks to this self-portrait. It is just amazing how much the artist loves to play with his portraits and image.

Alex is greatly influenced by TV and cinema. He once sat in the directors chair, for his web series As it Lays. Who knows, he might sit in one again.

Paying homage to his mother, it is just incredible how he makes these portraits look so real. It is amazing, and a true work o art.

If you are wondering why Alex is obsessed with surfing, here is the answer. He is not a surfer. However, he thinks his approach to art is related to surfing. He thinks he is on a wave, and he can either go with or don’t.

One of the best part about his self-portraits is that Alex gives the viewers an insight into his life. He shows his everyday life as part of his art. And that is a rarity in the art world.

Another example of how the artist gives viewers an insight into his everyday life. This is how his rear view mirror looks. In Los Angeles, it is always sunny.

Neon colors were quite popular in the past several years. And Alex is always about what is popular, but he uses it in his own unique way.

New Waves is an exhibition Alex set up in Hong Kong. It includes multimedia works related to his first feature-length film, SPF-18. While shooting the movie, he noticed pelicans silhouetted against the sky or swooping in at the edge of the frame. And he used them for his “images”.

Neon Lights, newspaper headlines, and art historical references flash into view in the New Waves exhibition. The show his deep attunement to the intersection of media, visual pleasure, and history.

For his New Waves exhibition, Alex again used his hometown for inspiration. He is born in Los Angeles, so the exhibition features sunsets, beachscapes, and self-portraits on a backdrop of molded neoprene and fiberglass panels.

You can find many of the celebrities Alex used for his Web Series As it Lays in this self-portrait. They probably gave him autographed pictures.

This summer, people in Marseille, French city, asked whether Batman is now patrolling the city. But that was not the case. Alex installed a Bat Signal at the MAMO Arts Centre on the Roof of an apartment. The signal was installed as part of his Batman-focused exhibition.

Contemporary fertility icon? Who doesn’t need one? Definitely a very clever work by the genius artist.

Rimowa is a premium luggage brand. At the beginning of 2019, they revealed their latest collaboration with Alex. The result was a candy-hued collection of suitcases.

Here is the setup for his Web Series. This is where Alex interviewed more than 30 celebrities and then released it as a movie.

This photo was taken during the Hong Kong New Waves exhibition. It is a perfect photo of Alex and his work, with the sunny yellow color in the background, as well as the ocean blue. Los Angeles baby!