Born as Charles Leval in 1988 in Epinal, Levalet grew up in Guadeloupe. In that region, he came into contact with urban culture and plastic arts.

Following his contact with urban culture, the French artist continued his visual arts studies in Strasbourg. His work turned towards video and flourished thanks to theatrical practice.

By 2012, his work started moving to the streets of Paris. And in 2013, he began exhibiting his work in galleries and participate in international events.

His work is above all a work of drawing and installation. Levalet stages his characters drawn in Indian ink in the public space. For him, it is a game of visual and semantic dialogue with the present environment.

His characters interact with the architecture and unfold in situations often bordering on the absurd.

Levalet has more than 70,000 followers on his Instagram account where he often shares photos of his artwork.

Let’s start with a painting that shows his interaction with the public and the environment. Levalet loves sending social messages through his art.

If you want to see unusual art, Levalet is the guy to check. His art is just amazing and he combines it to perfection.

We all know who the Minotaur is. An ancient Greece creature with a body of a human and head of a bull. Well, just look at how Levalet managed to turn him into a modern human.

The painting is a great allegory and metaphor to war and people serving in it. Not all people want to reload the weapons and fire, but they are forced to.

Definitely one of the better visualizations of nausea, wouldn’t you say. This is probably how we feel when we have nausea and sickness.

This is the cycle of life, displayed in some weird imagination by the author. And it shows that no matter if you are born as a king of peasant, you end up in the same spot.

We said in the beginning that his paintings interact with the environment. Well just look how masterfully he painted a prison escape next to some cells in the street.

Many of Levalet’s paintings showcase the cycle of life. He is obsessed with it, and it serves as one of his biggest inspirations. But he shows it in a twisted way. 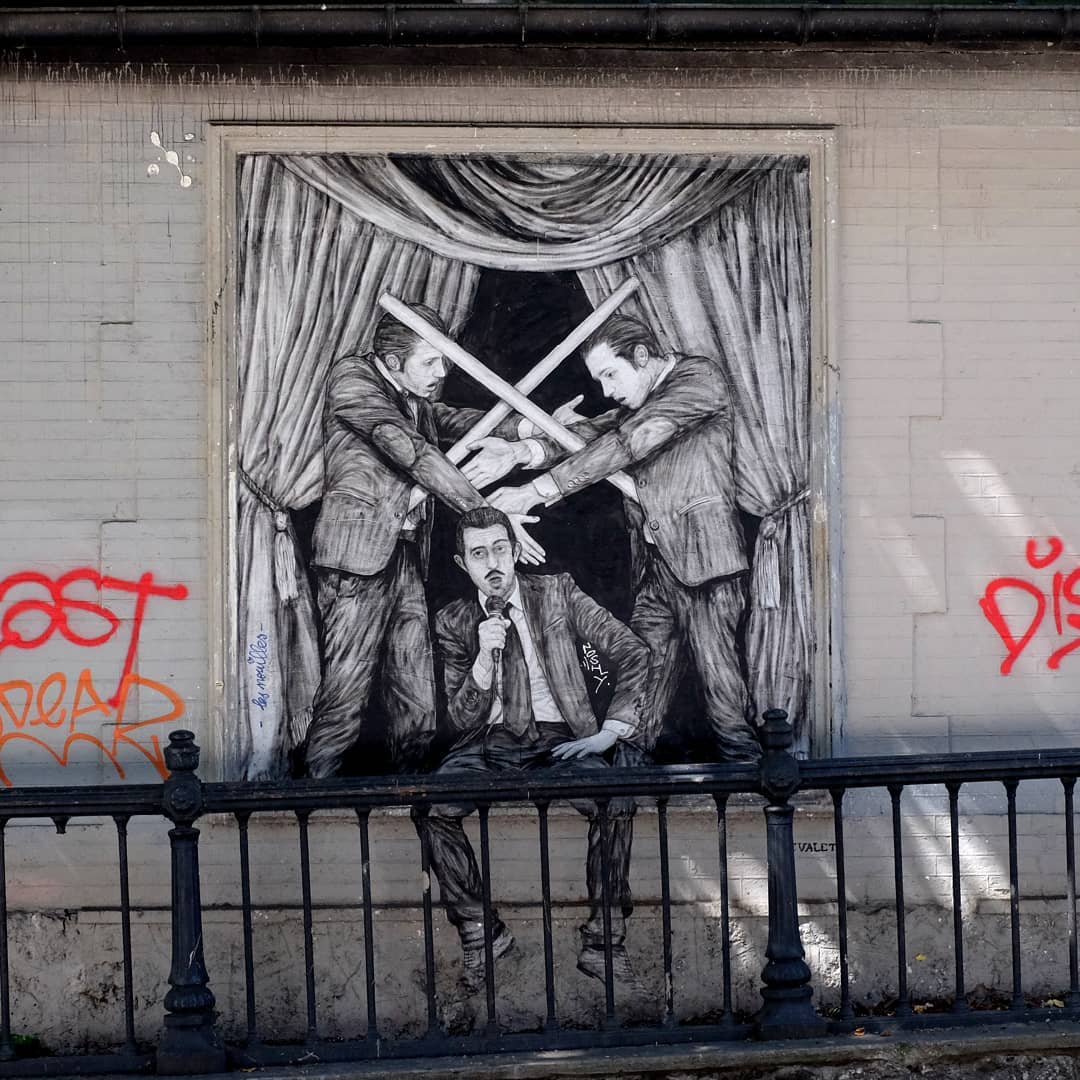 Are we puppets in the bigger picture? Are we all puppets in the world? Who is controlling us? These are questions that we often ask ourselves. And the French artists displayed the visual image of it.

Another society inspired photo that shows a harsh reality. Why do we go bankrupt? What is the cause of bankruptcy?

What is temptation? It is a desire to engage in short-term urges for enjoyment. And it often threatens the long-term goals. In some religions, temptation is the inclination to sin.

In the past several years, the department of human resources has become one of the most popular departments. What do they do? What is their purpose? Look at the painting to see.

One of the reasons why fans love Levalet is his ability to visualize common terms. Like conflict of interests. It is a perfect painting summarizing the idea behind the term.

When you think of striptease, you probably think of something dirty and provocative. But we all get stripped down on a daily basis. And that is the harsh reality.

In the past several years, more and more people have turned to gambling. It is an activity that promises quick money. But what is the reality? How many people have fall victim to the promises of quick money.

Light is the driving force in today’s world. We seek light on a daily basis. Without light, life looks and feels depressive.

Smuggling has become a common crime around the world lately. According to some estimates, there are more than 3 million irregular entries in the US alone every year.

This Latin phrase translates to “time flies”. It is used to draw attention to the rapid passage of time. And we often feel this in our daily life, right?

19. Dans les entrailles (In The Bowels)

The photo shows the time at work some people have to endure. The next time you think your job is hard, think about people that do much worse things than you.

Do you take precautions? These measures taken in advance to prevent something dangerous or unpleasant can definitely save your life. And if you do not take them on a daily basis, you risk a lot.

Transhumance is a common term in pastoralism and nomadism. It is a seasonal movement of livestock between fixed summer and winter pastures. And in montane regions, the term implies movement between higher pastures in summer and lower in winter.

How can you go incognito? How you can protect your privacy? That is something we try to do daily in our modern lives. And Levalet has a nice idea for visualization of the term.

There is a suitable reaction to every action. This is one of the basic Newton laws. In modern terms, we call it the domino effect. One domino can cause a chain reaction. And this is how it looks in the harsh military reality.

We might come to this type of social gatherings one day. Who knows?

People nowadays often joke about how much time we spend online and watching at our smartphone. This is probably how Romeo and Juliet would look like in modern times?

Levalet often plays with the modern professions that have taken a turn for the worse. One of them is definitely journalism.

There is a lot of metaphor in Levalet’s paintings. But most of them show social activities and the consequence of them.

The term translates to Proselytism in English. It is the act or fact of religious conversion. But it also includes actions which invite such conversion.

We live in a world where often people claim they got bitten by a dog on the streets. But the hunt is not like they often say.

In the past few years, especially when Donald Trump served as president of the US, we saw rise in climate skepticism. And this painting shows just how absurd that is.

When you lose chances of winning, your only action should be to retreat and save as much as you can.

We often say that only together we can make this world a better place. The term togetherness has seen rise in popularity. And if we ever get to it, it would be a nice and refreshing change.

Life is a vicious cycle. Every action leads to another reaction, and we often spin around in a circle. The painting shows it and displays it perfectly.

Levalet plays a lot with social events and sometimes draws parodies of those. This is exactly such painting.

Some 50 years ago we talked about drug addiction, caffeine addiction, smoking addiction, and alcohol addiction. Nowadays? Well, we have moved toward technology addiction. And we would love to finish our list with such painting and message.