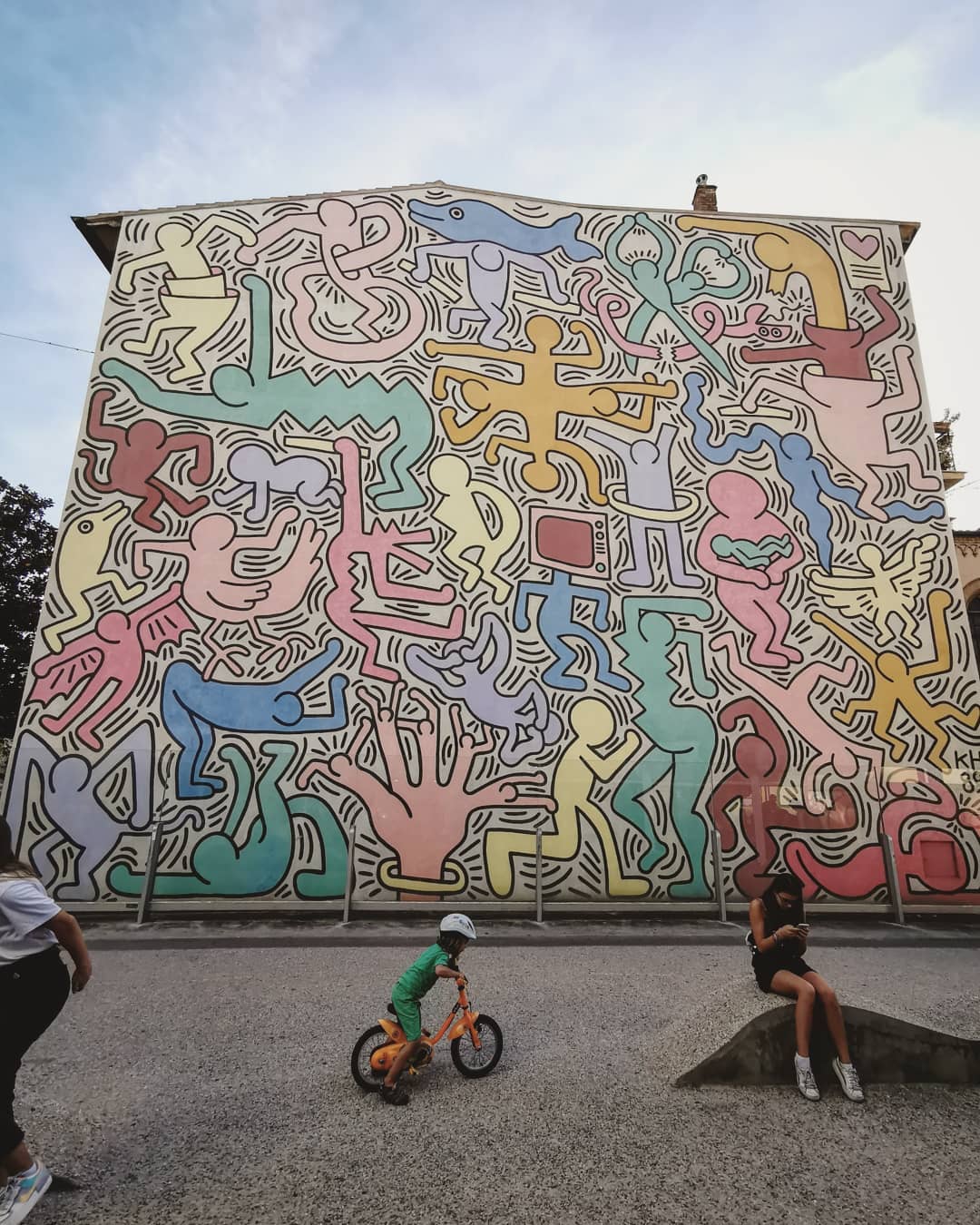 Born in May 1958, Keith Haring was an American artist who got popular with his pop art. His pop art emerged from the New York City graffiti subculture of the 1980s.

Haring produced animated imagery that became widely recognized visual language. Much of his work includes sexual allusions that turned into social activism. He used images to advocate for safe sex and AIDS awareness.

His popularity grew from his spontaneous drawings in New York City subways. He chalked outlines of figures, dogs, and other stylized images on blank black advertising spaces. After gaining fame and recognition, he created colorful larger scale murals.

During his career he produced more than 50 artworks between 1982 and 1989. Many of them he created voluntarily for hospitals, day care centers, and schools.

The Pop Art artist died on February 16, 1990 of AIDS-related complications. During his life, he was a huge supporter of the LGBTQ movement and became a poster child of the movement. In 2014, he received the inaugural honor in the Rainbow Honor Walk in San Francisco. And then in 2019, he was one of the inaugural 50 American pioneers inducted on the National LGBTQ Wall of Honor.

Keith was only 31 years of age when he died. More than 1,000 people attended his funeral. Since his death, he has been the subject of several international retrospectives.

Today, he is recognized for his exclusive use of black and white, and typical use of primary colors. He explained the nature of that symbols as “representing youthful innocence, purity, goodness, and potential”.

Some of his most famous tags are the Radiant Baby and the Barking Dog. His signature style makes an appearance in fashion collections to this day. For example, you can find his art in brands like Adidas, Lacoste, UNIQLO, Reebok, and Coach.

Some of his paintings have reached millions of dollars price tag. In 1989, just one year before his death, he established the Keith Haring Foundation to provide funding and imagery to AIDS organizations and children’s programs.

The smiling face represents one of his signature paintings. Some speculated that the smile was actually the artist’s smile.

Haring was a master at creating out of this world creatures that actually resembled humans. While his creatures look strange and weird, it is still easy to identify with them.

For this artwork, Haring used cartoonish creatures and combined them with highly stylized abstract patterning. The result is a dense and rhythmic carpet of imagery.

As one of the social artists, Haring’s paintings always carry a deeper message. That was his style and goal. He didn’t name these paintings because he wanted people to look deeper than the name and find the meaning themselves.

For the Montreux jazz shop, Haring came up with three designs. The company accepted all of them. Haring painted constantly when he visited the city, producing murals on black panels on stage while musicians performed.

Haring produced more than 50 Untitled paintings, many of them voluntary for hospitals and schools. He used these paintings to raise awareness for many social topics.

One of the best parts about these Untitled paintings is that Keith added so many symbols, fans could look for hours for the true meaning. Yes, he gave fans directions, but he left them to find the true meaning themselves.

As with other Untitled paintings, the social message is there. You can see people reacting in different ways, and you can decipher the scene.

Dogs played a huge role in Keith’s artwork. Read below for his dog figures. And that is probably why he used one of the popular dog movies as an inspiration for this artwork.

You need to study Keith Haring in order to properly understand his paintings and work. For example, the dog symbol and dog character represents authoritarian government, abuse of power, police states, and oppressive regimes. Usually, Keith put the dog in a standing figure, and sometimes combined it with a human form.

This painting is a response to a real life incident that happened in 1985. In the early 1980s, the death of a young graffiti in police custody shocked and enraged the street artist scene of New York.

As we said before, the Untitled series are complex paintings. All of them are in response to social topics. And they carry different messages.

For most of the Untitled series, Keith wanted to show authoritarian government and its relationship with the people. As you can see here, the “government” is strangling the people around.

The painting is a striking and deeply intimate self-portrait of the artist and Julia Gruen. She worked as his assistant and studio manager.

Every now and then, Haring found a way to make himself part of the painting. He was often commissioned to do work for museums and art districts.

The painting carries a clear message. Haring was anti-drug, and he was against use of drugs like crack. His painting is a straightforward message to young people.

Smoking kills. And that is something that nowadays we read on the label of cigarettes. Back in the day, smoking packs did not carry such message. So, artists like Keith tried to show people what happens if they go hard with smoking.

Keith opened a pop shop store in New York in 1986. The shop closed in 2005. In 1987, he opened one in Tokyo as well, and closed it only one year after. He viewed the Pop Shop as an extension of his work. That is where he produced such graphics.

Many of his Untitled series paintings contain thousands of little details. But this one is different in a way that it depicts two people hugging and expressing their love. And while red and white are female and male color, the artist was not into defining love in such way.

This is one of the more obvious LGBTQ support paintings. As you can see, the two people on the painting under the heart love symbol are gender neutral.

Here is a bit different Untitled painting. It depicts a sculpture from ancient civilizations, a place where he sometimes found inspiration.

Keith created a poster for the 40th Anniversary of the New York City Ballet. It was one of the 11 posters by the artist. He signed and dedicated one of the pieces with a small radiant baby.

Growing is a series of 5 screen prints. They are all recognizable for the exclusive use of primary colors and simplified figures. Fans could easy recognize the figures as his.

October 11 is a National Coming Out Day. Haring, a supporter of the LGBTQ community himself, painted the slogan “coming out of the closet”. And it is quite obvious and literate.

Here are more of his screen prints for the Pop shop Haring opened in New York and Tokyo.

We said before that Keith believed in love is love. There are rarely gender defined figures in his paintings. And when he depicts love, he makes sure that his characters are gender neutral.

Chocolate Buddha is another set of several paintings. This one contains five lithographs in colors on Arches Infinity paper.

This is another poster by the famous American artist. It depicts a woman in a ballet pose.

Matryoshka dolls are typical and traditional in Russia. They are a traditional representation of the mother carrying a child within her. Keith had no problems using a Russian symbol in his work.

Keith Haring lived with AIDS. Once he found out he has AIDS, he made sure to raise awareness about the disease. At the time, AIDS was still a relative unknown to most people. While nowadays we know quite a lot about the disease. People live with it without any problems, that was not the case in the late 1980s.

Tuttomondo translates to All the World in English. It is a mural the American artist created in 1989 for the Sant’Antonio Abate church in Pisa. It is located on the rear wall of the church and it remains one of the last public murals executed before his death.

Now this is a classic Untitled painting by Keith. It features many symbols and characters. Together, they create a perfect rhythmic dynamic.

X-Men was a popular comic book franchise in the 1980s and 1990s. And if you didn’t know, one of the theory is that with the X-men, author Stan Lee wanted to support the LGBTQ community. There are many examples of queer characters in the X-men franchise that further support this theory.

Let’s finish off with a self-portrait in the Untitled series. Self-portraits were quite popular in the 16th and 17th century. But even modern artists found a way to utilize the technique.