The Renaissance marked the transition from the Middle Ages to modern times. It covered the period between the 14th and the 17th century. Following the Crisis of the Late Middle Ages, the Renaissance brought great social change. Who are some of the famous Renaissance artists? How they changed history?

This period gave us a great cultural development. The word itself translates to “re-birth”. Marked by a renewed interest in ancient Greek and Roman culture, the Renaissance started in Italy and then spread across Europe. That is why most of the famous Renaissance artists come from Italy.

The period left a profound and long-lasting effect on civilization. It brought development in many fields, spanning a period of more than 300 years. It revolutionized art, medicine, and architecture. Some of the most famous Renaissance artists created the greatest works of art ever.

Born in a farmhouse in 1452 in Tuscany, Italy, he displayed great artistic skills as a young child. By the age of 12, he started his apprenticeship learning subjects like metalworking and sculpting.

He had a unique talent in depicting human expressions, giving him great notoriety from an early age. Da Vinci started receiving commissions in 1478, in his 20s. Yet, he declined some independent commissions and offered his services to the Duke of Milan. There, he painted some of his best works, including The Last Supper.

Following the fall of the Duke, he fled to Venice and drew maps for the military. Eventually, he returned to Florence and started working on Mona Lisa.

It is hard to pick just a single piece of art by Da Vinci. But we went with the Last Supper because of its lasting impact on humanity, culture, and art. Mona Lisa is the most famous painting in the world, but The Last Supper had a greater impact.

The late 15th-century mural painting depicts the last supper from the Book of Genesis. While other artists draw inspiration from the event, Da Vinci made a revolutionary painting.

For starters, unlike other depictions, he doesn’t emphasize Judas by placing him on the opposite side of the table. Instead, he is in the shadows. There is also the popular conspiracy theory involving the figure seated at the table to the right of Christ. Some speculate that is Mary Magdalene, a woman.

But that is not the case. Mary Magdalene didn’t sit at the table in any of the four Gospels. She had a minor supporting role. And it would be blatant heresy for Leonardo to paint her there.

One reason why many think it is Mary Magdalene is because of Da Vinci’s painting style. He often painted effeminate men, looking more like women than men.

Tintoretto studied in the Venetian School of painting. All of the Venetian painters used lush colors and lighting effects. And the style had a great influence on the development of Western painting.

Tintoretto is one of the three Venetian giants during the Renaissance era, alongside Titian and Veronese. He also developed the perspective to create an illusion of three-dimensional space. He stretched the technique by using long and vast perspectives.

He had an innovative and dramatic style, with a fervor for colossal works. Critics praise his art for its radical nature, flamboyance, and modernity.

Tintoretto also found inspiration in The Last Supper. But his painting is totally different than the one of Da Vinci. For starters, the perspective and view are totally different. In Leonardo’s painting, figures look like they interact with the viewer. That is not the case here.

Tintoretto depicted The Last Supper several times during his career. We will take a look at his 1592-1594 painting, a work in his final years. It departs from his compositional formula.

What is different? Tintoretto puts secondary characters at the center of the scene, for example, women carrying a dish and servants taking the dishes from the table.

His piece also makes use of Mannerist devices, for example, the complex and radically asymmetrical composition. 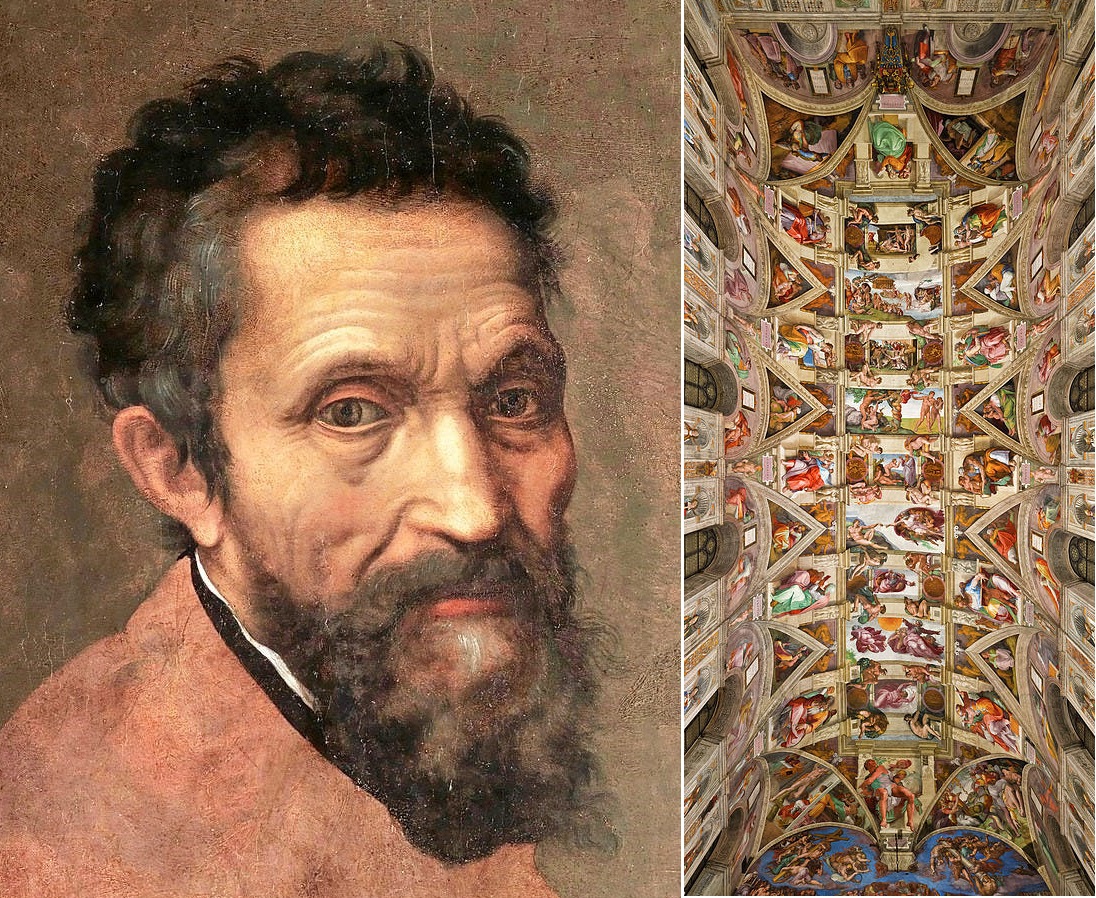 Famous for his artistic genius in painting, architecture, and poetry, Michelangelo thought of himself as a sculptor. He tried all forms of art, but always maintained sculpting as his constant.

His subjects focused on humans and religions. He has one of the most famous, if not the most famous art piece in his portfolio. Michelangelo painted the ceiling of the Sistine Chapel, but he also produced the Madonna sculptures, David, and other religious works.

As a child, he showed prodigious artistic talent. He started his apprenticeship with Domenico Ghirlandaio, and at fourteen, he started earning money as an artist.

We wanted to go with David, but you cannot ignore the most prominent art piece in the history of mankind. Michelangelo painted the ceiling for four years, between 1508 and 1512. It is a cornerstone work of High Renaissance art.

In the 16th century, no other Venetian painter achieved as much success as Titian. He is the most important painter of the Venetian school in the 16th century. As a versatile painter, he did portraits, landscapes, mythological subjects, religious subjects, and much more.

During his career, he experimented with different styles of painting. In the later years, he radically revised his style and technique.

Titian experimented with loose brushwork and subtlety of tone in his later works. And those are some of his best pieces.

Nobody came close to his use of color and painting methods, especially his emphasis on the touches of the brush. Titian also brought another revolution in the world of art. He transformed the history of art and of patronage by enabling kings and princes of the Church to commission sexual seductions as readily as crucifixions.

He started working on this oil painting in 1532 and completed it by 1534. Yet, he sold it four years later. It depicts a nude young woman, traditionally identified with the goddess Venus. She lies on a couch or bed in the sumptuous surroundings of a Renaissance palace.

One of the most prolific painters and architects, Raphael suffered a sudden and mysterious death at 37 years of age. But he left behind a vast amount of paintings and art pieces. He operated in a large workshop where he supervised more than 50 pupils.

Raphael used religious themes and subjects. The Pope and the Catholic Church commissioned most of his work. He took over his father’s workshop at the age of 11.

He moved to Rome, and there, the Pope hired him as a chief architect to build palaces for the Church. He worked until his death and even left some of his works unfinished. Famous for his Madonnas, critics praise his work for the clarity of form and ease of composition.

Masterpiece: The Marriage of the Virgin

He completed this oil painting in 1504 for the Franciscan church of San Francesco, Citta di Castello. It depicts a marriage ceremony between Mary and Joseph.

This piece shows the progress of excellence of Raphael’s style, which becomes subtle and refined in his later years.

Bosch is one of the few famous Renaissance artists outside of Italy. Famous as the first artist to depict innovative creatures and realms incomprehensible to humans. He once said, “poor is the mind that always uses the inventions of others and invents nothing itself”.

Critics praise his art for containing grotesque humans, monsters, animals, and many other fantastical creatures. His paintings often depict a detailed rendition of Heaven and Hell through biblical landscapes. He used his art to show the venerability of humans when tempted by evil or lust.

Masterpiece: The Garden of Earthly Delights

This triptych oil painting didn’t have a name at the beginning. The Garden of Earthly Delights is the modern name. The theme of the painting is the fate of humanity, but Bosch visualizes this concept in a much more explicit manner.

It shows the surreal and bizarre temptations on Earth. Reading from left to right, you can the creation of man, his life, and then his failure due to his own behavior.

Born in 1386 in Florence, Italy, Donato di Niccolò di Betto Bardi played a role in paving the way for Renaissance artists later on. He received training from a goldsmith’s workshop and then started his apprenticeship with Lorenzo Ghiberti for metalwork and sculpture.

Donatello continued to sculpt until his death at 79 years. He left behind just one unfinished piece, which his pupils later completed. An innovative sculptor of his time, he created David, the first free-standing statue since antiquity.

Donatello used linear perspective in the Gothic style, creating lifelike and emotional sculptures in the way. His sculptures displayed accurate depictions of sorrow and suffering.

We said before, this is the first free-standing statue since antiquity. He actually created two statues of David. The first one is a marble rendition of the biblical hero. He did that one in his early 20s.

But his second David is the first major Renaissance sculpture.

Born in 1445 in Florence, Sandro Botticelli is one of the most esteemed Italian painters of his time. His paintings focused on religious subjects. Yet, some of his most famous paintings focus on depicting mythological scenes.

He learned to paint frescoes during his apprenticeship with Fra Filippo. And as an adult, he started painting for churches. Earning a high reputation, the Pope invited him to paint frescoes on the walls of the Sistine Chapel. That is the only time he worked outside Florence.

After the fall of the Medici, his primary patrons, he experienced a swift decline. He fell into isolation and mental anguish until his death.

Masterpiece: The Birth of Venus

The painting is one of the most famous paintings in history. It is right up there with The Last Supper, Mona Lisa, and The Creation of Adam.

It depicts the goddess arriving at the shore after her birth, emerging from the sea fully-grown. Born of the sea spray and blown to the shore by the winds, the goddess stands on a giant scallop shell. She looks as pure and as perfect as a pearl.

Considered one of the most important painters of the 14th century, Giotto revolutionized Western art. Some call him The Father of European Painting.

He is among the first great painters of the Renaissance. Giotto initiated the decisive break with the Byzantine style and re-introduced the technique of drawing accurately from life.

He is among the first painters to masterfully capture the gestures, faces, sorrows, and joys of humans. Giotto also practiced faithfulness to nature. Some art historians believe nobody can equal him in terms of painting technique and style.

Masterpiece: The Kiss of Judas

Considered by many the most famous picture of the famous Scrovegni Chapel frescoes. Giotto is among the first painters to portray Judas the traitor. The painting tells the contemplator about the confrontation between good and evil.

Caravaggio changed the course of art history by introducing bold innovations in composition. For example, his use of light and the interpretation of mythical themes paved the way for later artists.

Talented and troubled Renaissance painter, he started his apprenticeship at 13 years of age. Shortly after that, he fled to Rome and gained notoriety for his unique style. Praised for his realism and use of light and dark contrasts, his technique would later influence baroque painting.

Caravaggio didn’t want to hide the flaws of the individual. Instead, he emphasized them. That is why some critics consider his paintings as vulgar.

Masterpiece: The Calling of Saint Matthew

This outstanding composition depicts the situation in which Jesus calls Matthew to follow him. It is part of a series devoted to the life of Saint Matthew.

The Church commissioned these paintings with specific instructions. What is special about this painting? Look at the ray of light illuminating the faces of the men at the table looking at Jesus. This use of light is the signature technique by Caravaggio.

1 thought on “10 Famous Renaissance Artists And Their Signature Masterpiece”