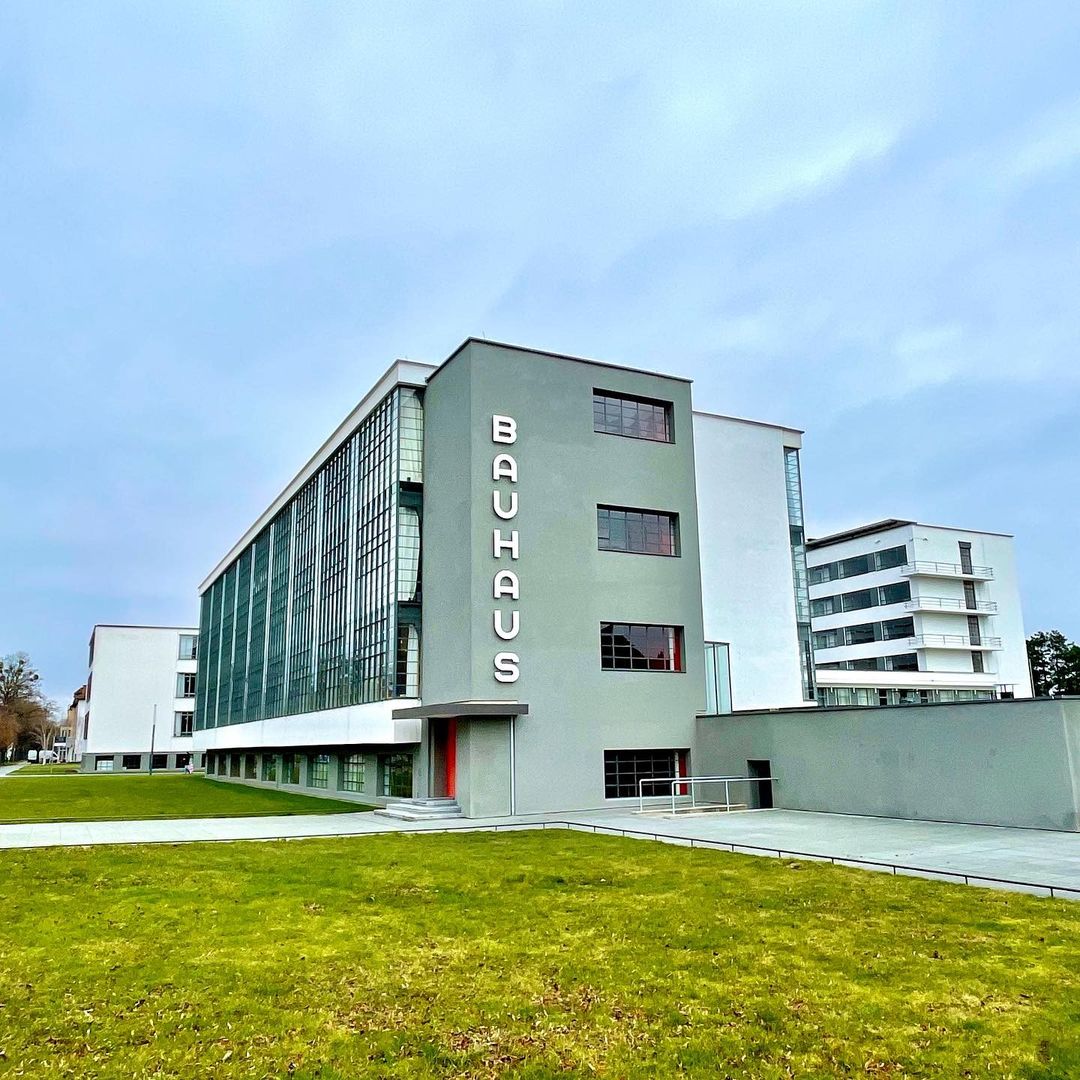 The beauty and appeal of the Bauhaus architecture are not in its intricate ornaments, explosive color schemes, textures, or materials, but in its simplicity and functionality. The goal is to create a beautiful aesthetic, drawing attention to the streamlined design. That was achieved with its bold, functional, and abstract shapes that require little decorative elements, adorned with a limited color pallet of white, gray, and beige using only the basic industrial materials like concrete, steel, and glass. Another distinct feature of the Bauhaus movement is balanced asymmetry created with simple geometric shapes and a few less notable details. In short, Bauhaus is definitely one clear example of German ingenuity and functionality.

In 2019, the Bauhaus architectural style celebrated the 100th anniversary of its creation. When Walter Gropius founded the Bauhaus school of architecture and design the goal was to bring together the fine arts and the applied arts after seeing the wide gap that was formed between the two. His goal was to create a new guild of craftsmen that will close this gap, and the philosophy that was started then of “less is more” is still prominent in our everyday lives, even if we’re unaware of its true origins.

The Bauhaus school had a turbulent beginning, with frequent relocations and changes of directors, however despite these changes it always held firm to its goal to reintegrate art and industrialization. Once the Bauhaus school closed its doors permanently in 1933, after being moved from Weimar to Dessau, and then Berlin, its students started their own movement and traveled across the globe. By fleeing the Nazy regime they found places where they managed to bring to life the lessons they’ve learned at the Bauhaus school into architectural marvels.

Most of the Bauhaus architects found their place in Tel Aviv, Izrael which during that period was a city in development, making it a paradise for architects, having a black slate for building their creations. The result was the construction of over 4.000 buildings in the Bauhaus style, creating the modernist so-called White City which was named a World Heritage Site by UNESCO in 2003. The most notable difference in the Tel Aviv Bauhaus style is the use of smaller windows, compensating for the bright sunlight and high temperatures of the area.

The US also got its share of the original Bauhaus disciple, through architect Laszlo Moholy-Nagy, who created the New Bauhaus school in 1937, later becoming part of the  Illinois Institute of Technology. Moholy-Nagy, his contemporaries, and his students went on to create numerous iconic buildings across the country which are still treasured today.

While the cold and impersonal functionality of the Bauhaus architectural style may not be up to everyone’s taste, the movement created a treasure of modern architecture and influenced many subsequent modern styles and designs we enjoy today. Now, let’s see some of the most notable Bauhaus creations across the world.

Regarded as one of the most notable buildings of 20th-century architecture, the R.S Crown Hall is located on the campus of  Illinois Institute of Technology and designed by the famous architect Mies van der Rohe who was one of the Bauhaus schools directors. The Crown Hall is a masterpiece of steel and glass construction, keeping in line with the simplistic beauty, functionality, and openness of the Bauhaus style.

Designed by Walter Gropius and Adolf Meyer, the owner of this German shoe factory hired the famous Bauhaus architects for this project wanting his factory to symbolize a break from the past. The building has floor-to-ceiling windows and steel beams going around the building leaving the space seemingly open. The black bricks used at the base created a feeling of lightness.

There are a few more notable structures of the 4.000 Bauhaus buildings in Tel Aviv, and the Poli House Hotel is definitely one of them. It is a clear example of how even the functionality and simplicity of this architectural style can look rich and luxurious.

Another design by Rohe, the Barcelona Pavilion was meant to showcase the German design during the 1929 Barcelona International Exposition. This design stays true to the principles of the Bauhaus, but instead of the standard materials common for Bauhaus designs, the predominant material in the Barcelona Pavillion is marble slabs.

Build near the school campus in Dessau, this Walter Gropius’ design was his vision of how the houses of the future should look like, entirely functional without neglecting or undermining the refined look.

The Rothschild Boulevard is considered one of the showiest areas in Tel Aviv, holding many examples of the Bauhaus architecture along its length. The residential building on 117 Rotchishild Boulevard sits on a crossroad, adorned with two spiraling stairwells, with sectioned parts each with a sharp and rounded corner. This was also one of the buildings that was renovated in recent years to preserve the Bauhaus heritage.

If this building seems familiar, it might be because it was used as a set for a few sci-fi movies. The most notable features are the distinct silhouette of the shed roofs, which is one of the few features that remained from the original Gropius’ design.

Another creation of Rohe and Lilly Reich, this house was one of the first attempts at modern architecture in Europe, constructed with industrial materials and wide, airy spaces inside. The iconic house in the Checz Republic became part of the UNESCO World Heritage List in 2001.

Every art form draws inspiration from somewhere which can turn into a distinct feature of that artform. The Bauhaus style is not very known for its marine or coastal connections, but the architects of this building of 56 Levanda Street in Tel Aviv did draw inspiration from the curves of a shim, translating it into the ship-like shape that provides durability from the elements in this corner building, followed up by the crisp, sleek beauty of the continuous balconies along the curve.

Another Bauhaus marvel in Tel Aviv, this three-story building houses both business and residential spaces, arranged around an internal courtyard. But its most distinct feature of this 1935 creation is the rounded balconies with straight railings zig-zagging along the side.

This U-shaped building is among those Bauhaus constructions that followed the trend of encompassing mixed-use spaces, meaning it was both a residential and commercial area. Each of the building’s three wings has its own distinct facade and shape that is balanced together by the color, the example of the Bauhaus balanced asymmetry.

While the glamour and prestige of HaYarkon Street have seen some hard times, it used to be a prominent location for many diplomats, affluent families, and politicians. After its renovation and holding the most expensive penthouse in Tel Aviv, the old creation by Pinchas Bizonsky is going back to its glory days.

Also known as Robert C. Weaver Federal Building, it might surprise you to find the US Department of Housing and Urban Development Headquarters on the list of Bauhaus architecture. This 10-story office building was designed by one of the earliest students of the Bauhaus school, architect Marcel Breuer.

The Bauhaus-style representative from London is located in the  Belsize Park district of the London Borough of Camden. Also known as Isokon Flats or Lawn Road Flats reinforced concrete block of 36 flats that at the time of construction were a trial version for the new minimalist way of living. The building has seen many changes in use since its construction, where during its latest renovation it also houses a gallery where the garage used to be.

The Cinema Hotel is another stylish example of Tel Aviv-s Bauhaus influence, completed in 1939 and designed by Yehuda Magidovitch. The beauty here is that the design of the building needed to complement and sync with the plaza which is today’s Dizengoff Square and its multicolored fountain. That feat was achieved with white, uniformed facades of the buildings and concave balconies overlooking the gorgeous plaza.

Despite being a residential house, the Frank Hause in Pittsburg was designed by the pioneering masters of the Bauhaus movement, Walter Gropius and Marcel Breuer. It showcases many trademark features of the Bauhaus architecture, with a cantilever staircase, curved glass, and one of the first instances of central air conditioning being the most prominent.