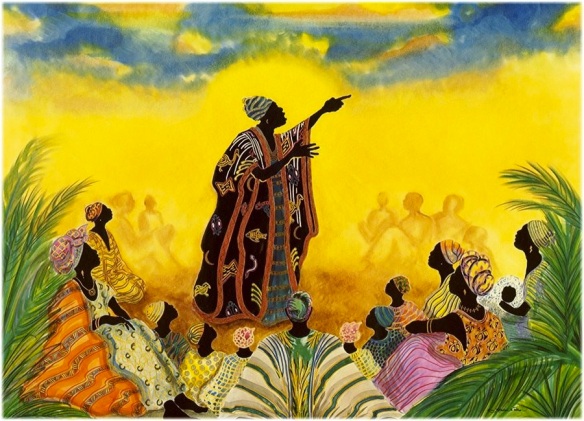 The African continent is home to a diverse range of ethnic groups. Each of these has their own religious beliefs and traditions. The list of African Gods and Goddesses is long and found within traditional African religions.

Akan religion compromises traditional beliefs and practices of the Akan people of Ghana and the eastern Ivory Coast. They have identified themselves as Christians since the early 20th century.

Ganda people, or Baganda, are a Bantu ethnic group native to Buganda, a subnational kingdom within Uganda. There are 52 clans, but only 46 are officially recognized.

The King’s Men, or Kabaka, have organized African diaspora communities in Canada, South Africa, Sweden, the US, and the United Kingdom.

Another common African religion is the Dahomean religion. Practiced by the Fon people of the Dahomey Kingdom, it existed until 1898. It is now the country of Benin.

With that in mind, let’s take a look at some of the popular African Gods and Goddesses.

Lisa is the male, yes, you read that right. And Mawu is the female, married twin siblings of Nana Buluku, the creator spirits. They are sometimes combined as Mawu-Lisa, meaning an androgynous spirit.

This spirit created the world and made it orderly, and then they made plants, animals, and humans.

On the first day, they created the world and humanity. On the second, Mawu-Lisa made the earth suitable for human life. On the third day, they gave humans intellect, language, and senses. And on the fourth day, they gave mankind the gift of technology.

This guy is the sky god and the supreme god and creator. He created a set of twins who were the first man and woman on Earth, Meme, and Gborogboro. Meme gave birth to all the animals.

Their descendants were founders of the Lugbara clans of Uganda and the Democratic Republic of Congo.

The trickster spider is a mythological figure who can also take on human form. He is featured in many West African cultures and religions.

He is known as the spirit of knowledge and tales. He often plays tricks on the unsuspecting, humans, animals, or even gods.

Oshun is the Goddess of love, freedom, fertility, and water. She uses her abilities to create and heal the world.

According to one Orisha legend,Olodumare, the God of all Gods, sent Oshun to Earth to create a world of male deities. She wore a vibrant gold dress and while they admired her beauty, the male gods didn’t think they needed her to create a world.

So, she became frustrated with the lack of appreciation, left Earth, and went to the moon. There, she admired herself in the mirror knowing men will come back for help.

After a while, the Earth dried, animals died, life was ending. So the Gods went to Olodumare, who realized Oshun was not there. The Gods understood that without her love and ability to create life, there would be no Earth. So, they went begging for her forgiveness.

The goddess of weather, she is one of the most powerful deities in African religion. Oya is a spirit sent by one of the three manifestations of Olodumare.

She and her brother Shango were born to the Great Sea Mother, goddess Yemaya. There is no telling of their father.

She is a protector of women. They call on Her to settle disputes in their favor. They also pray to Oya to clear a path for new growth with her machete or sword. Her powers of change are swift and guaranteed.

The African creator god worshiped in the Democratic Republic of Congo had an intense need for company. He was lonely and unwell until he vomited and created the universe and everything in it.

He first created the sun, then the moon and stars, and then the planets. He belched again and nine animals and humans appeared.

According to the legend, the nine animals multiplied and created every creature we know today.

The creator god of the San, Kaang created the universe. Many stories about this God revolve around resurrection.

As the San people are spiritual, they perform ritual dances and rock art to break the barrier between the physical and spiritual world.

The Egyptian god of the afterlife is the guardian of the dead. He is one of the most famous Egyptian gods. Mainly depicted as a dog-like figure, he makes judgments on people’s destiny. He can lead people to eternal life or dooms them to Ammit the devourer.

Other names include Ani, Ana, Ale, or Ali depending on the Igbo dialect. She is the Earth Mother Goddess, an African deity of morality, death, and fertility in Odinami.

The Igbo people of Nigeria call her the mother of all things. Ala is present at the beginning of the cycle of life. According to Igbo tradition, she sends a sign such as a snake or a bee to tell her priests where to build a Mbari.

The African god of blacksmithing is the son of Mawu-Lisa. He was known to be handy at fixing things. So, Mawu-Lisa sent him down to Earth to do that.

The African water spirit is a mother, lover, healer, provider, and mystic. She often appears as a mermaid, but can also be depicted as a snake charmer.

Sometimes, the two depictions are combined. She is known to recruit new followers by abducting them while they swim in the river and transporting them to her realm.

Aja is a popular Orisha among the Nigerian Gods and Goddesses. She represents the soul of the woodland and the creatures inside.

Considered an African Goddess of the forest, she is also a goddess of animals. Some call it wild wind.

Other names include Yemoya, Yemanja, Yemalla, and many more. She was the river or sea orisha of the Yoruba people, one of the largest ethnic groups in Nigeria.

She is among the most powerful and loved deities in the African continent. Some call her Queen of the Sea.

Ngai lives on Mount Kenya (Kere-Nyaga) and spends most of the time there. The origin of the Gikuyu tribe starts with this African god. He emphasized the beauty of the land below and promised he would give the man anything he needed as long as he kept praying. The man called Gikuyu had nine daughters, but longer for sons to carry on his name. So, the god provided that, and the Gikuyu tribe was born.

She is the supreme Goddess, the mother of all mothers. The ancient goddess appears as an old woman who is the creator of the world. Nana Buluku gave birth to the Sun (Lisa) and the Moon(Mawu), her twin children.

Nana is the most revered deity and the genesis of any form of worship and religion in West Africa.